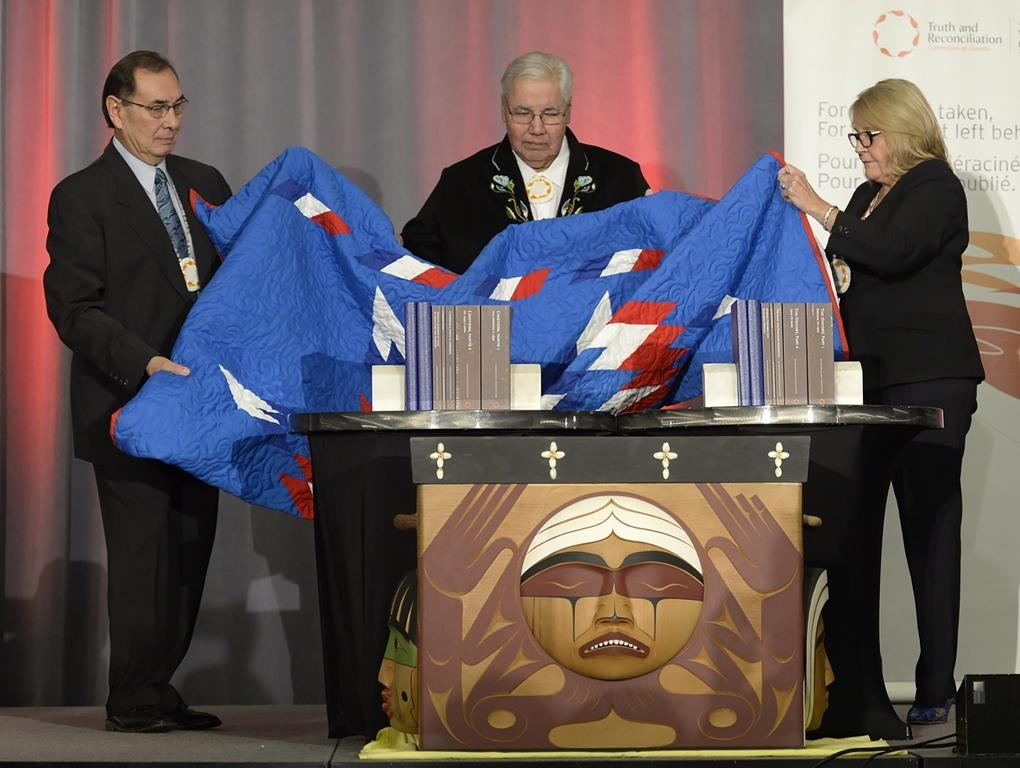 OTTAWA — A teary Prime Minister Justin Trudeau is vowing his government will go beyond the 94 "calls to action" cited in the final report of the Truth and Reconciliation Commission into Canada's residential schools system.

The commission formally wrapped up its six-year-plus odyssey Tuesday with another emotional ceremony in Ottawa, this time to deliver the complete, seven-volume, 3,766-page report that supports the three-member commission's recommendations.

"We need nothing less than a total renewal of the relationship between Canada and indigenous peoples," Trudeau told a packed convention hall in downtown Ottawa.

"I give you my word that we will renew and respect that relationship."

Trudeau, whose Liberals came to office in October, was pointedly reminded before speaking that he was about to become the first prime minister to formally address the commission, which was born out of a 2007 class-action judgment won by residential school survivors.

Commissioner Marie Wilson noted that all other parties to the court-ordered agreement responded formally last June to the commission's preliminary findings, but not the Conservative government.

Conservatives remained skeptical Tuesday. Indigenous affairs critic Cathy McLeod called the Liberals "irresponsible" for acceding to all 94 of the TRC's recommendations "with no detailed impact analysis or comprehensive costing."

But Wilson pointed out "just how capable of responding" Canadians are, using the example of Syrian refugees over the past number of weeks, adding she hopes Canadians "will look close to home in considering what we deem to be urgent."

For a prime minister with a very full plate facing Canada's longest-running policy debacle — an assimilationist education model that pre-dates Confederation, characterized by the commission as "cultural genocide" — Trudeau waded into the fray with a soft-spoken speech that was part lament, part apology and part promise.

The goal of government actions, he said, "is to lift this burden from your shoulders, from those of your families and communities. It is to accept fully our responsibilities and our failings as a government and as a country."

His father, Pierre Trudeau, also attempted to tackle the long-festering relationship between the Crown and First Nations in his first term as prime minister.

The 1969 federal government white paper on "Indian policy" proposed to abolish the 1867 Indian Act and remove the distinct legal status of indigenous peoples, including treaty rights, in an effort to end what it called a discriminatory relationship. The elder Trudeau abandoned the policy in 1970 after a massive outcry from First Nations, Metis and Inuit peoples.

More recently, the 1996 Royal Commission on Aboriginal Peoples expressed many of the same themes and concerns as the Truth and Reconciliation Commission, complete with recommendations for action.

The final TRC report dryly notes the 1996 study was largely ignored; "a majority of its recommendations were never implemented."

But Trudeau the younger said his government's work has already begun with the start of on an inquiry into missing and murdered indigenous women, prompting one of the four standing ovations he earned.

He also said the government will begin following up on the United Nations Declaration on the Rights of Indigenous People, another bone of contention with the previous government.

Trudeau announced he's creating a multi-stakeholder "national engagement strategy for developing and implementing a national reconciliation framework," which will respond to the commission's many calls for change.

"We will remember always that reconciliation is not an indigenous issue," said the prime minister. "It is a Canadian issue."

But the story of Canada's residential schools, commission head Justice Murray Sinclair told the gathering, is really the story of the resilience of children.

"It is a story about surviving."

As part of the Indian Residential Schools Settlement Agreement, more than 80,000 survivors of residential schools were awarded compensation from a $2 billion fund, as well as receiving a full report from the Truth and Reconciliation Commission it spawned.

Some of those survivors were in the hall Tuesday, and a trio spoke of the commission's work.

Eugene Arcand, who spent 15 years in residential schools, said he was among those chosen to serve as advisers to the commission, but ended up in another role.

"It gave us a chance ... a chance to become children again," said Arcand, choking up. "We shared our tears, we shared our laughs, but we dug deep inside and we dug out the demons."

Madeleine Basile was sent to a residential school in Quebec at age six after her father died, only to have her 11-year-old sister die at the school.

"Today I can hear my heart beating," said Basile. "I am alive, megwich, I am alive."

Sinclair said the commission's findings make clear that the myriad problems of aboriginal communities are rooted, directly or indirectly, in years of government efforts to "assimilate, acculturate, indoctrinate and destroy."

"When it comes to engineering the lives of indigenous people in this country, governments have shown a disdainful mistrust of indigenous capacity and a breezy belief in their own," he said.

Sinclair also thanked his family, saying they fretted about his health as he worked gruelling hours with the commission.

"In the area of my own health and well-being, I am a reckless fool."