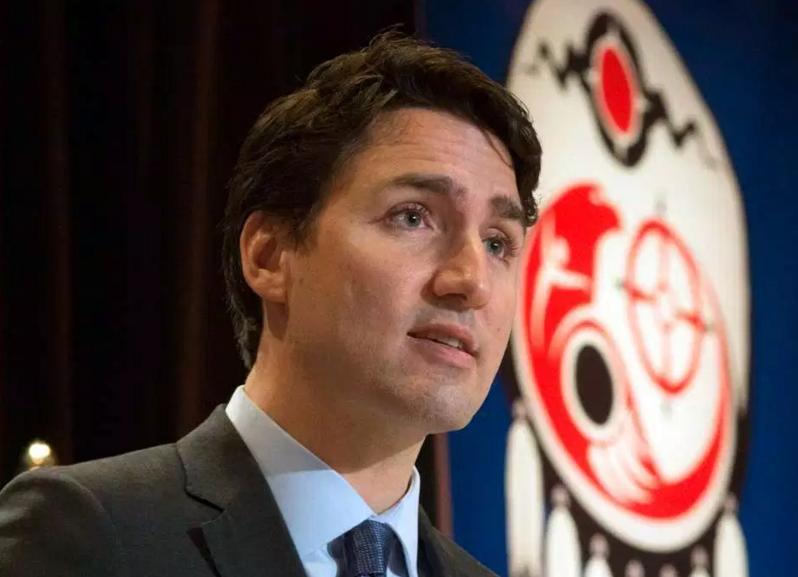 At the Truth and Reconciliation Commission (TRC) ceremony in Ottawa on Tuesday, Prime Minister Justin Trudeau told a story: when he was a school student — a student in a good school, with a good teacher, and good classroom supplies — he wasn't taught about Indigenous history in his classes.

"When we got to the chapter of the text book on Indigenous Canadians... the teacher shrugged and said this chapter is not very interesting, not very important, so we’re going to skip it," he told a teary-eyed crowd of residential school survivors, family members, and Indigenous leaders.

Fighting back his own tears, the prime minister drew a breath and made an unprecedented promise to Indigenous people. He unreservedly vowed to be a partner and friend in the reconciliation process, and to take immediate government action on the 94 calls to action of the TRC report, released in full on Tuesday morning.

"Let me tell you, the work that you have done today... will ensure that never again in the future of Canada will students be told that this is not an integral part of everything we are as a country and everything we are as Canadians," he said to a standing ovation. "That's a promise we make right here."

The TRC report, a 25-pound, seven-volume, 3,766-page record of the harrowing legacy of Canada's Indian Residential School (IRS) system, paves the way forward for healing and a renewed nation-to-nation relationship between governments, society, and Indigenous people. It was compiled over six years of hearings with testimony from 7,000 IRS survivors and family members, and in June, brought forward irrefutable evidence of cultural genocide in Canada.

More than 100,000 First Nations, Métis and Inuit children passed through the residential school system over the course of a century, enduring years of physical, sexual and emotional abuse. The report spares no gruesome detail of their experience, from the deaths of at least 3,201 students between 1867 and 2000, to the lack of food, water, and resources available children in the schools.

"Today it not just about the ending of the work of the commission, it is a new beginning," said Justice Murray Sinclair, chair of the TRC.

"I stand before you hopeful that that we are at the threshold of a new era, a point of fundamental change in Canada's story; a period of change that if sustained by the will of the people, will forever realign the shared history of Indigenous and non-Indigenous people in Canada."

Federal action on the way

According to Trudeau, this new era has already begun with the launch of an inquiry into missing and murdered Indigenous women and girls (MMIW) last week, and will continue tomorrow when he meets with Indigenous leaders and national Aboriginal organizations for advice on the TRC report. With their help, the federal government will design a national engagement strategy for developing a country-wide reconciliation framework that fully implements to the TRC calls to action.

The prime minister also plans to implement the United Nations Declaration on the Rights of Indigenous Peoples, as called for by the commission.

"We need nothing less than a total renewal of the relationship between Canada and Indigenous peoples," said Trudeau. "I give you my word that we will renew and respect that relationship."

The ceremony heard speeches from commissioners, elders, IRS survivors, members of government, and church leaders, all of whom assisted in the TRC process. The overbearing message was one of respect for the strength and resilience of Indigenous people — both those who survived the schools to pass on their culture, and those who were lost along that way.

But the event also brought forward a resounding message hope for the future of Indigenous people.

Hope for the future

"We owe it to each other to build a Canada based on our shared future," said Sinclair. "The hope of our commission for reconciliation in the future is that we as adults can make a commitment to the children of the future, our children their children, and grandchildren that we will do what we can today to make their world of tomorrow a better place."

It won't be easy he added; reconciliation is a "storm" and we will fall down from time to time.

The TRC report itself recognizes this enormous challenge, and reads:

"Reconciliation will require more than pious words about the shortcomings of those who preceded us. It obliges us to both recognize the ways in which the legacy of residential schools continues to disfigure Canadian life and to abandon policies and approaches that currently serve to extend that hurtful legacy."

The report's 94 calls to action are meant to remedy this problem, and emphasize greater investment in health care, education, employment opportunities, economic development, and clean water for Indigenous communities, as well as government accountability for failures of the past and present.