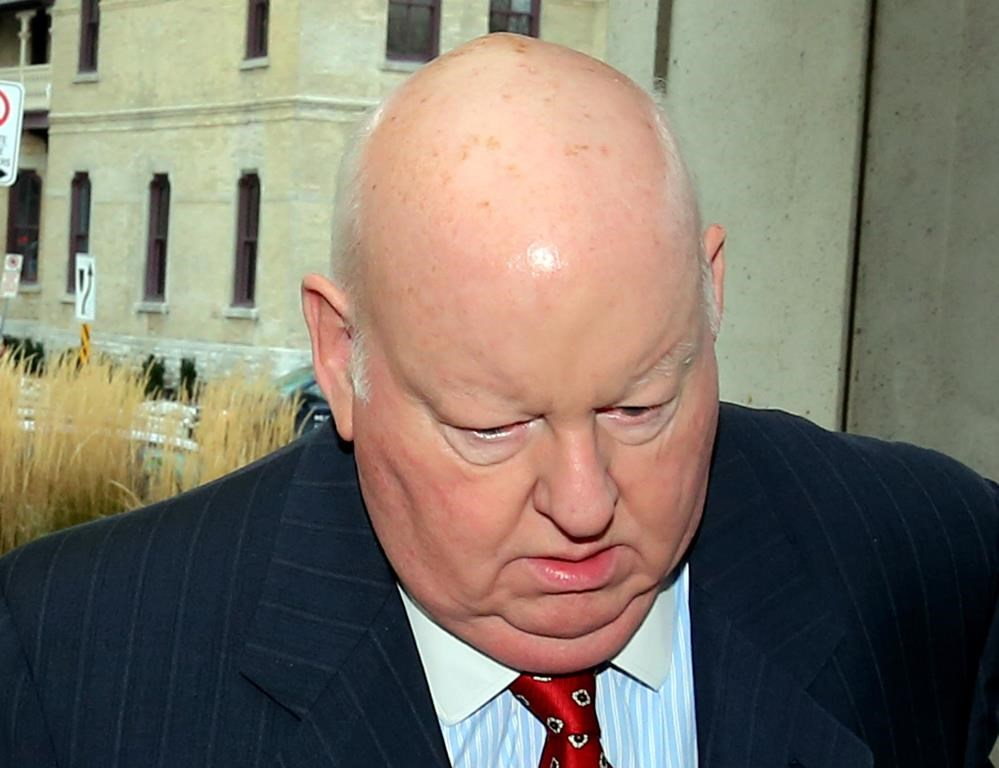 OTTAWA — After six days of sharing career reminiscences and grievances about life in the Conservative fold, Sen. Mike Duffy on Wednesday faced the Crown's scrutiny of his version of events and of the particulars of where he actually lives.

Prosecutor Mark Holmes zeroed in on the heart of the trial: why Duffy began filing living expense claims after his 2009 appointment to the Senate, when he was residing in exactly the same place in suburban Ottawa.

The senator has pleaded not guilty to 31 counts of fraud, breach of trust and bribery, related to his contested Senate office and living expenses. Many of those charges are linked to the fact that Duffy made claims on the basis that his primary residence was a cottage in Prince Edward Island.

Duffy went from working as a political show host for CTV, to a Senate seat a few blocks away from the network's offices. He had lived in the national capital region since the 1970s.

"The proposition is this: far from incurring additional expenses after you were appointed to the Senate, your expenses associated with going to work actually went down considerably?" Holmes asked Duffy.

Duffy became testy or sarcastic at times during Holmes' cross-examination, at one point saying telling him he wouldn't entertain a particular line of questioning.

The prosecution pressed Duffy on his argument that the Senate's form designating residency is "a trap," because it requires senators to indicate the primary residence "in the province you represent."

Holmes pointed out that even if Duffy filled out that form declaring his primary residence was in P.E.I., he didn't have to file for a housing allowance and per diem living expenses afterward.

Duffy insisted that from the moment he became the senator for P.E.I., he was entitled to claim expenses. He said other senators live in hotels in Ottawa or rent apartments at a far higher cost than he incurs by living in his existing bungalow.

"Your position here is that you need additional living expenses to work on Parliament Hill as a senator," said Holmes.

Duffy took pains during his defence testimony to explain the nearly $100,000 in renovations he did to the cottage in Cavendish, P.E.I.. He conceded that he is still unable to stay at the property when there is heavy snowfall.

"Whatever your plans might be for residing in P.E.I., none of it ever includes you living (in Cavendish) in the winters. You'd agree with that?" Holmes asked.

"No, I don't agree with that. It depends on the weather," Duffy responded.

"Is weather forecasting more sophisticated in Prince Edward Island than it is on the mainland? Do you follow me? The storms are unpredictable," said Holmes.

Duffy retorted: "So what you're telling me is that it's the wrong place, that if I were living in the city if would be OK with you? Well, I live in (Charlottetown) at my expense in the stormy weather. I don't get it."

The prosecution also appeared to be trying to cast doubt on some of Duffy's testimony, as either inconsistent or exaggerated.

For example, Duffy had told the court that he first met prime minister Stephen Harper in his office in June 2008, when he was still a broadcaster for CTV. He said the spoke about the appointment of the CBC president.

Holmes noted that Hubert Lacroix had been appointed the year before. Duffy conceded he might have mixed up his meetings.

The Crown is scheduled to continue its cross-examination on Thursday. The lawyers discussed with the judge the need for additional weeks in 2016 in order to wrap up the trial.

Sen. Mike Duffy to star in the last chapter of his long trial