Trump: No third-party run for me 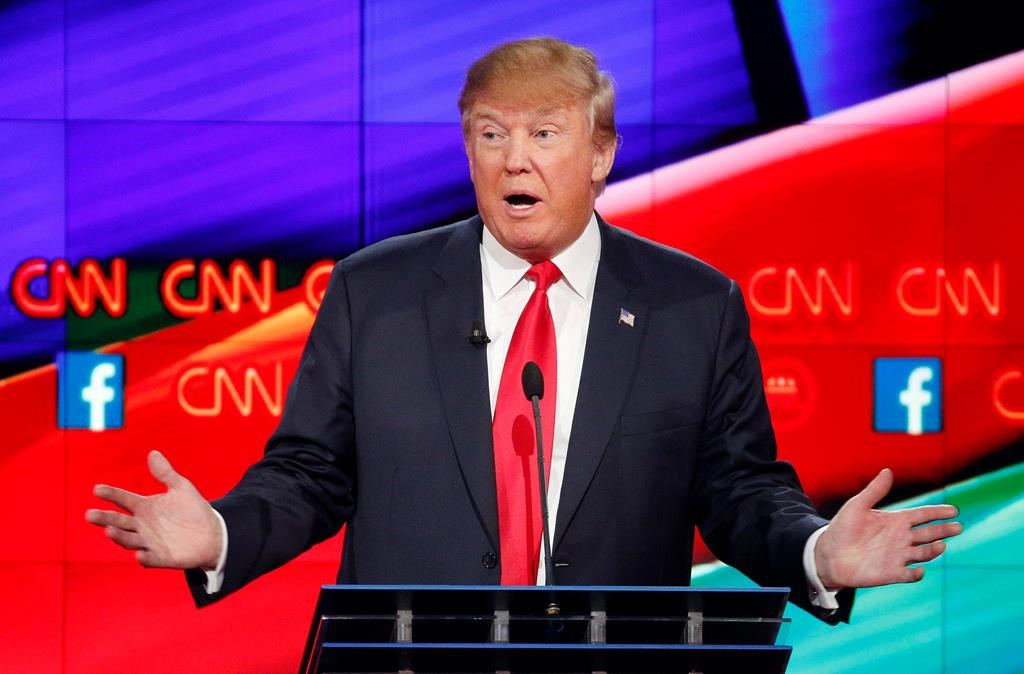 WASHINGTON — Donald Trump has explicitly ruled out running as an independent, downplaying the scare scenario for Republicans that he might split the party's support in next year's presidential election.

He made the promise in a candidates' debate, which drew claps from a conservative radio host who helped moderate the CNN-hosted event Tuesday.

Trump was especially explicit in a post-debate interview.

"I'm a Republican. I'm going to be a Republican," Trump told CNN, adding that he'd met good people in his new political family.

"I'm not going to be doing a third party... No matter what."

He'd been wishy-washy on the issue, which could be crucial to Republican prospects in 2016. Numerous polls have shown the party losing badly if he runs as an independent candidate, and have suggested he'd steal far more votes from Republicans than Democrats.

Trump had left open the possibility in recent days — despite having signed a pledge to that effect three months ago. It appears the pledge is back on.

He made the guarantee a few hours after it was predicted by a famous Canadian-born friend: Conrad Black.

The former media baron offered the no-third-party prediction at the end of a laudatory piece in the National Review, where he defended Trump and denounced his critics in the media.

He disclosed that Trump was a personal friend and concluded: "The desperation prayer of the liberals — that he will split the Republicans — will not happen: He was never going to run as an independent."

Trump apparently loved the article: "What an honor to read your piece," Trump tweeted to Black. "As one of the truly great intellects & my friend, I won't forget!!"

The Lord Black of Crossharbour, his official title as a British peer, retorted: "Many thanks, Donald and all good wishes in helping to clean up the American government. Honored to be your friend."

Black had penned a piece titled, "Trump Is The Good Guy," for the conservative National Review. The basic premise of Black's piece was that Trump is being unfairly smeared by the political establishment and media, whom Black accuses of dishonestly distorting his policies.

He describes Trump as a threat to the corrupt American political system where members of Congress represent corporate lobbyists, and media unfairly tar candidates.

Trump would have about three months to decide on an independent run. He'd need to start organizing ballot-access initiatives in various states by March, said Richard Winger, who runs a website that chronicles the various hurdles to independent candidacies, Ballot Access News.

A recent poll suggested 68 per cent of his supporters would stick with him if he chose such a route — a devastating prospect for the Republican party.

Within the party, his biggest emerging threat is Sen. Ted Cruz — who's skyrocketed in the polls in Iowa and is challenging him among anti-establishment voters.

Trump and Cruz were civil to each other in the debate.

The more muscular exchanges were between Cruz and Sen. Marco Rubio and they focused on fundamental questions about the military and surveillance activism of the U.S. government.

Rubio is more of a security-apparatus hawk — supporting a bigger surveillance state at home, and regime-change of certain dictators abroad. Cruz is a stricter small-government conservative, favouring a more libertarian approach on surveillance domestically and a more laissez-faire attitude to foreign tyrants.

"(Syria's) Assad is a bad man. (Libya's) Gadhafi was a bad man. (Egypt's) Mubarak had a terrible human rights record. But they were assisting us — at least Gadhafi and Mubarak — in fighting radical Islamic terrorists," Cruz said, scolding Rubio.

"And if we topple Assad, the result will be ISIS will take over Syria, and it will worsen U.S. national security interests... Instead of being a Woodrow Wilson democracy promoter we ought to hunt down our enemies and kill ISIS rather than creating opportunities for ISIS to take control of new countries."

Should Trump falter, those two could become the chief protagonists in this Republican race.