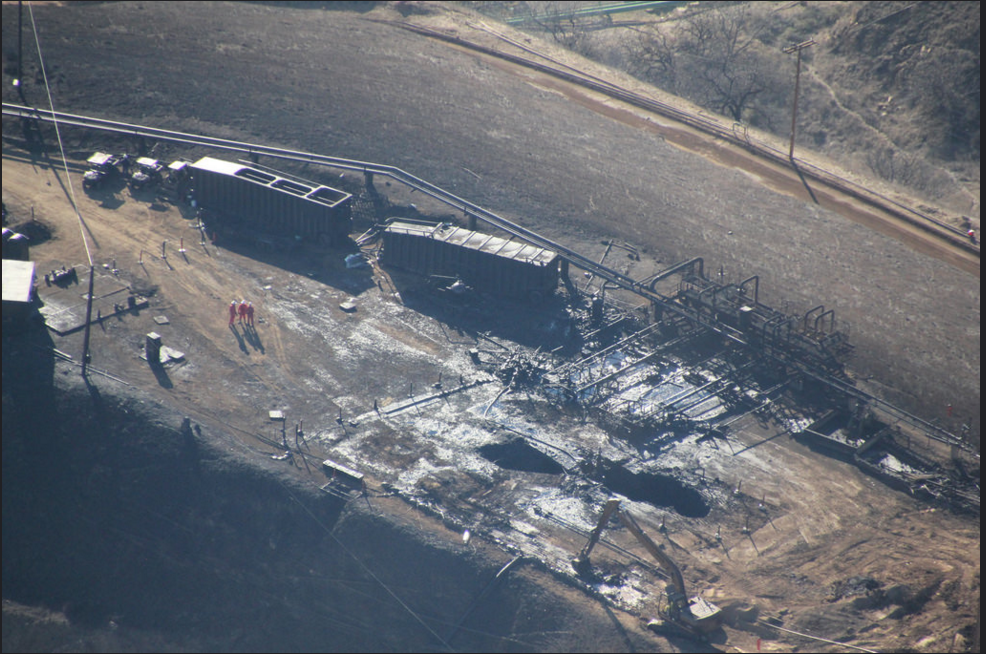 It is possible that Canada could experience a California-like methane gas plume, according to a number of experts. The gas leak near Los Angeles has been likened to Deepwater Horizon for the months-long struggle by engineers to control the damage.

“Such a leak could happen in Canada,” warned Mark Brownstein, vice-president of the climate and energy program for the U.S. non-profit, Environmental Defense Fund.

Brownstein said the group learned from its study of the oil and gas industry and methane emissions that “periodic upsets” take place at facilities from equipment malfunctions or because of poorly-maintained equipment and that those can result in significant emissions.

Since late October, a damaged well at a natural gas storage facility in Los Angeles has spewed some 77,000 metric tonnes of methane into the atmosphere.

Operated by SoCal Gas, the Aliso Canyon storage facility provides power to the Los Angeles Basin. Because of the leak, some 4,000 residents of the city’s Porter Ranch neighbourhood have been relocated.

Although methane is a an odourless gas, mercaptans — a chemical added to help detect methane leaks — carries a strong sulphur smell that has been causing headaches, nausea and nosebleeds, according to Inside Climate News.

SolCal Gas did not respond to National Observer’s interview request by deadline. On its website, the company said that it regrets that the smell of the odorant in natural gas is unpleasant and that some people are sensitive to the door, but maintained that the odorant is harmless.

While the cause of the leak is unknown, SolCal Gas is drilling a secondary well in an effort to find and repair a seven-inch pipe several thousand feet below ground. It may take until March before the company is able to staunch the flow of methane.

“This is the kind of accident that can happen with natural gas, so the more we use, the more it could leak,” said Amy Townsend-Small, an assistant professor in the department of geology at the University of Cincinnati in Ohio.

Townsend-Small’s current research explores whether the transition from oil and coal to natural gas will result in increased methane emissions.

She told National Observer that the Aliso Canyon leak is unusually large, but said it represents the potential downside to natural gas.

“Natural gas has a lot of environmental benefits, but leaking methane is one of the big drawbacks,” Townsend-Small noted. “This leak is a good warning signal as to what could happen if we use more natural gas.”

The Aliso Canyon leak could very well set off alarm bells for opponents of LNG projects. But Townsend-Small pointed out that if the LNG is for export it would be stored in above-ground tanks, which are quicker to fix.

Large scale escape of methane is quite rare, one expert said

Other experts say the California methane plume is exceptional in its size.

Maurice Dusseault, a professor of engineering geology at the University of Waterloo in Ontario, said he believes there’s a very small probability of a similar leak occurring in Canada.

“Very small scale seepage is quite common. Large scale escape is quite rare,” he said.

In a 2014 report, Dusseault and his co-authors noted that since 1971, 27,000 well-bore leaks had been documented in Alberta. As well, an estimated 10 per cent of British Columbia's oil and gas wells are leaking methane into the atmosphere.

The authors said wellbore leaks are a commonly overlooked problem and present real risks to the environment and public safety, and that the leaks have caused numerous documented cases of groundwater contamination as well as contributing to greenhouse gas emissions.

These kinds of “fugitive emissions, leaks and venting” from gas lines, wells and storage facilities are a real concern for Canadians, agreed Chris Severson-Baker, regional director for Alberta and the North for the Pembina Institute think tank.

“This is something that actually happens on a routine basis, just lower volumes and less instantaneous impacts,” said Severson-Baker. “The way to tackle that is through the kind of thing Alberta is doing, methane reduction targets.”

In its new climate change plan. the Province of Alberta has stated that it intends to reduce methane emissions from oil and gas operations by 45 per cent by 2025.

Brownstein said that he hopes the Alberta government takes a hard look at Aliso Canyon and its circumstances and develops regulations that will cover such situations.