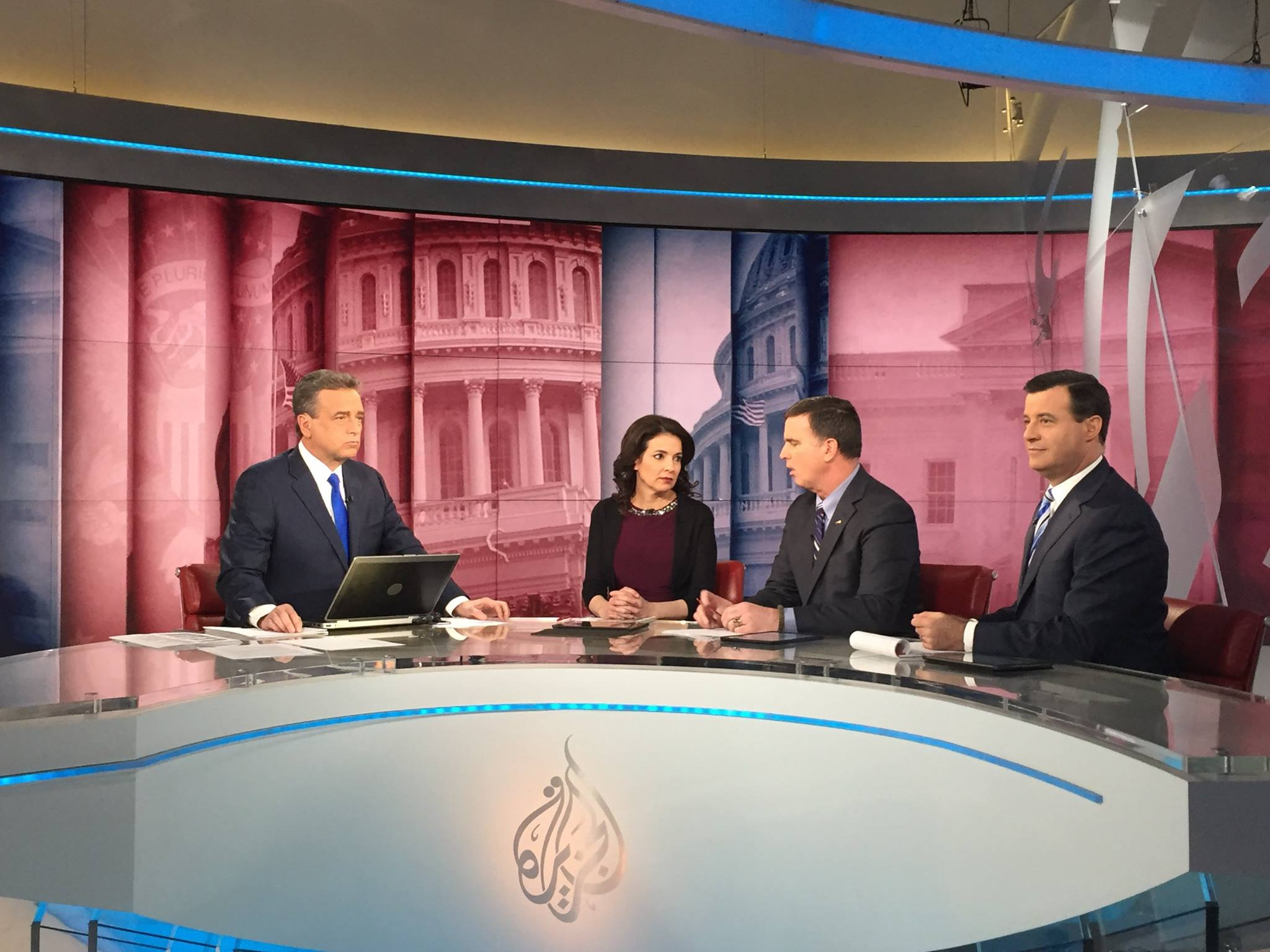 There's something I've wanted to say about Al Jazeera America that I felt couldn't until now: It wasn't as Arab as you probably assumed, at least demographics-wise.

I was proud of what was Arab about it. And it most certainly made me proud — for the first time, perhaps — to be American.

When Al Jazeera America — the now imminently defunct television news network — hired me as a Web reporter nearly three years ago before its launch, I was thrilled to have been chosen to help realize a project where Arabs would offer Americans a public service. I saw myself as part of a push to change the popular, homogenous narrative on Arabs by helping to identify and expose an infinite number of untold — whether by mistake or design — narratives in American society.

On the Saturday I was hired, I listened to 1960 Arab nationalist anthem El Watan El Akbar, The Great Nation. Singers from across the emerging Arab League pledged to unite and to define a people that would heal itself from the scourge of second-class citizenship in their own lands and world.

It’s one of renowned Egyptian composer Mohammed Abdel Wahab’s assertions of the beauty of the Arab people — a people of diverse cultures, skin colors, religions and politics — rising out of a century of colonial oppression. Several other peoples in their attempt to overcome oppression have gone through similar periods of ethnocentrism — For example, the Negritude movement of 1930s Paris and its U.S. counterpart the Harlem Renaissance also sought to celebrate as beautiful that which had been enslaved and diminished as subhuman.

The Harlem Renaissance and Negritude elevated Black voices for a time, but Black people in the U.S. and France continue to battle socioeconomic, political and legal systems balanced against them. Arabs had Al Jazeera America and Abdel Wahab's anthems, but as in the colonies of my grandparent’s generation, we still appear destined, particularly in the United States today, to be held down. No matter how much money we throw at elevating our voices, no matter how intellectual or educated we are, no matter how precious and desperately needed the public service we provide. That's quite simply because particular groups of evermore powerful U.S. voices rejoice in seeing us below.

That was made more than apparent to me on Wednesday when Al Jazeera America announced — in a country where banning Muslims has become a viable presidential election talking point — that they would shutter operations at the end of April. The reasons for its closure were manifold. But its reception in the U.S. made it quite clear: There is no room for an enterprise with an Arabic name in the American media landscape.

Al Jazeera America made me proud to be Arab because it was a formidable media that came out of Qatar, even though our newsroom was — despite the imagination of a U.S. media poised against it — almost entirely non-Arab. But despite the lack of a place for Al Jazeera in America, it also made me feel more American and love America more deeply than ever. I’d never truly reported on America before they gave me the chance to speak with so many Americans: With Native Americans, with business moguls, with death row inmates, with porn stars, with prostitutes, with Voodoo priests, with Holocaust survivors, with new immigrants, with schoolchildren, with abortion rights activists and opponents, with gun rights advocates and opponents, with HIV/AIDS awareness advocates, with homeless people.

Born and raised in Los Angeles, I’d never seen my own country until Al Jazeera America sent me to the Navajo Nation to write about the gay rights movement there; to write about witches in Danvers, Massachusetts; to write about former steel workers in Bethlehem, Pennsylvania; to write about a Chinese methanol plant set for Texas City, Texas. Sometimes people refused to talk to someone called Massoud Hayoun from Al Jazeera. Sometimes they were surprised that I — even as gay and agnostic as I am — would write about them for Al Jazeera America. I suppose assumptions about me mirrored some of the reasons why a media for which I won my first-ever award in media — one dotted with accolades from professional organizations — never found its way here.

Al Jazeera America had a number of systemic problems — our television audience never really matched at-times astronomical viewership on the website. And then some of the problems mimicked bad TV. During my time there, our company faced widely publicized litigation on allegations of racism and sexism, The New York Times reported our top attorney was never licensed, and most recently a key interviewee in an investigative story on performance-enhancing drugs in sports recanted his words. There were massive layoffs after a hiring spree that employed about 800 nationwide. Our first CEO, whose verbal gems were often hilarious, was forced from office. Some management decisions and allocations of assets seemed preposterous — no more preposterous, however, than at any other company I’ve worked at, in the U.S., China and elsewhere during the better part of a decade trying to satisfy my curiosity in life and my intense love of… basically, humans.

All the while, there were articles. Intensely xenophobic assertions like one on the litigation from The New York Post, which began: “Al Jazeera America is showing its true colors — and they’re not red, white and blue.”

Jezebel published an article on the women of Al Jazeera America detailing allegations of misogyny. None of the alleged perpetrators were named — if they had been, readers would have known that almost everyone involved was not of Arab origin — many had come directly from other mainstream U.S. media. What appeared to me to be the unspoken assumption was that Arabs — as is commonly accepted to be the case in the U.S. — are hostile toward women. There are, indeed, monumental problems faced by women in the Middle East and North Africa that feminists from that region battle without the help of their American counterparts. The fact is: many of the allegations of hostility lodged against Al Jazeera America are endemic and systemic in the American workplace.

There was a lens through which a deluge of insidiously similar articles viewed our enterprise that bears assessing, if the Anglophone press is ever to be as free and fair as it sees itself.

In the end, the CEO Al Anstey said on the Al Jazeera America website that I created with people who became family to me that the channel would close “in light of the economic challenges in the U.S. media marketplace.”

There were a great number of things I disagreed with about our editorial. But contrary to what media analysts in the U.S. dismissed as state-funded media, we often covered human rights abuses in Qatar. I’ve worked for both independent and state-owned Chinese media, accepting conditions less than ideal to be able to offer what information of note I could. That was altogether different from our U.S. operation at Al Jazeera America.

And we lived up to a promise to offer a “voice to the voiceless.” A friend living on a Native American reservation whom I’d interviewed years ago wrote on Facebook today today: “This really sucks. I know a lot of talented Natives that were working for them. Since they started Native and non-Native journalists were covering important issues in Indian Country.”

We broke ground on our coverage of Native Americans, and we did so much more. We investigated suspect business deals between Republican politicians and Chinese elite who had been accused of corruption. We spoke to the families of Islamic State recruits about what had led their children to partake of a phenomenon that is devastating the world. We brought young voices out of besieged Gaza in the aftermath of an offensive that obliterated what infrastructure they had. We tracked the neglected homeless in Chicago during one of the coldest winters on record. We traveled to the Marshall Islands to document the effects of climate change ahead of key talks last year. We demystified the Affordable Care Act. We gave trans men and women the opportunity to speak out on issues of homicide and widespread profiling. We shed light on the victims of sex trafficking on the shadowy streets of central Los Angeles. We spent the night talking with homeless in San Francisco about how sanitation workers had sprayed them with pesticides. We spent other nights tracking down pro- and anti-Beijing politicians during the Hong Kong democracy protests to internationalize Americans — to broaden their understanding of their own allies so that they might be better global citizens, understanding the international trends and threats affecting them.

We were the first and only media to give a platform to the voice of a young woman doing her dissertation on recently legislated abortion restrictions in her state — a dissertation that a local lawmaker tried to block. We spoke with Michael Brown’s mother and the victims of ongoing police brutality against U.S. communities of color — and never questioned, unlike The New York Times, whether Michael Brown was angelic enough.

I can explain in further detail why Al Jazeera America should exist — especially at a time when anti-Muslim sentiment is rising to levels that affect the civil liberties even of Americans without that or any particular faith. But log on to the website and you’ll see for yourself.

The indignant voices that we published on that website, the reporters and their interviews, are all that remain. There's something subversive about so many voices now looking for new platforms to voice their voicelessness, a Facebook post from a former Al Jazeera America colleague now facing unemployment suggests. A multiplicity of voices, Arab and otherwise, searching for the next frontier in the fight for integrity.