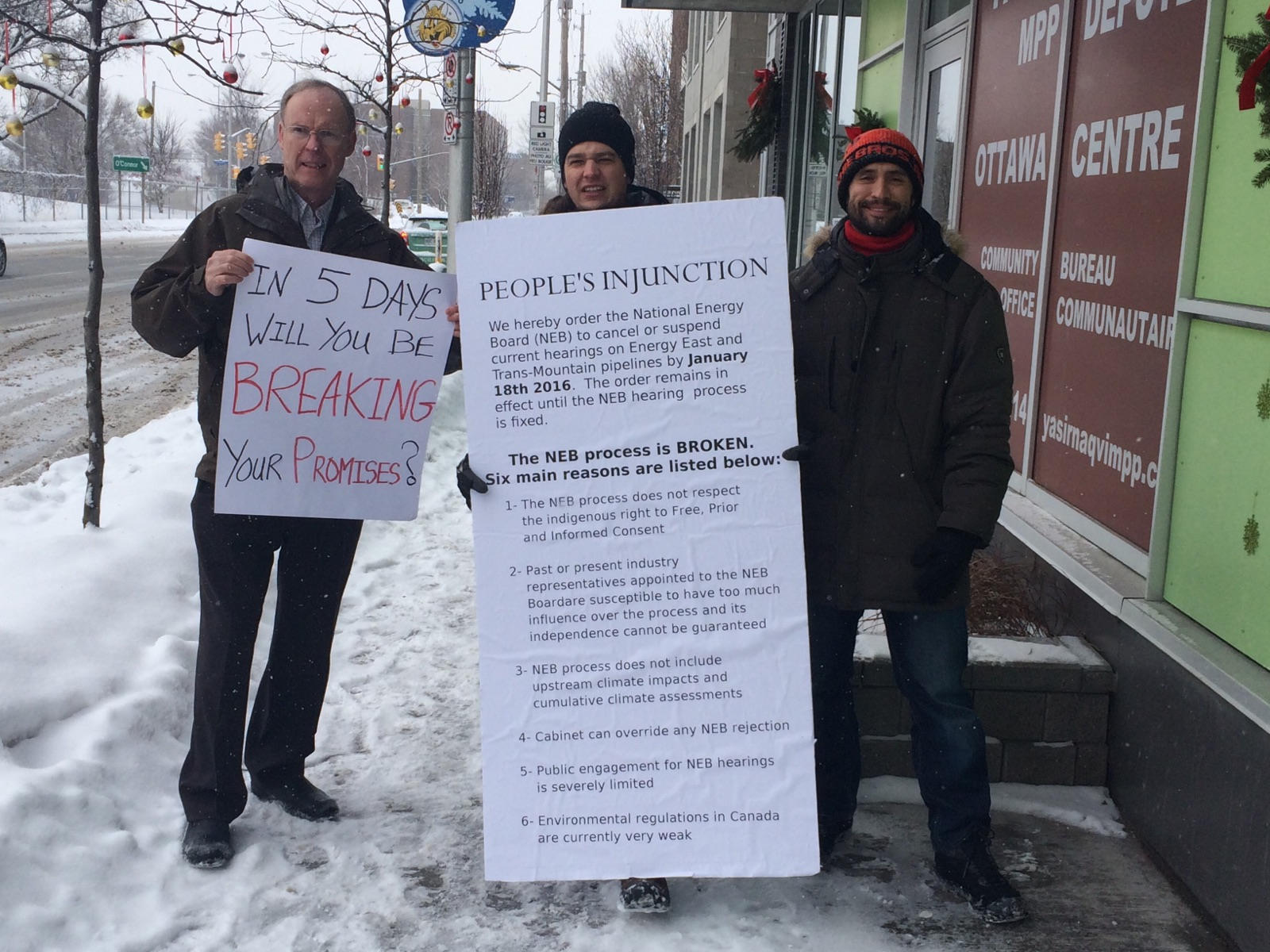 The injunction, served today at her Ottawa constituency office, gives the federal government until Jan. 18 to halt the NEB’s pipeline reviews on the grounds that the board’s current process is does not take into account the UN-recognized indigenous right to free, prior, and informed consent; environmental protection; or the impact of climate change. The protesters also questioned the independence of the NEB, saying that the previous Conservative government had stacked the board with members connected to the fossil fuel industry.

“We’re part of a Canada-wide initiative to make sure the Liberals practice what they preach. Our new government must be held accountable. You can’t say one thing and do the opposite. That is not leadership,” said 350.org Ottawa member Rolly Montpellier.

This latest protest comes after Prime Minister Justin Trudeau promised during the 2015 election campaign to overhaul the NEB, which they say had lost credibility during former Prime Minister Stephen Harper's administration.

“As Environment and Climate Change Minister, Catherine McKenna must be involved in making sure Liberal climate promises are respected,” explains Daniel Cayley-Daoust, also part of the group. “If pipeline proposals aren’t a priority for her and don’t take into account climate change, how can we take the 1.5 degrees Paris pledge to action seriously?”

While protesters are accusing the Liberals of backtracking on their promises, McKenna did pledge tougher environmental assessments for existing oil sands pipeline proposals last November, just days before the Paris climate talks kicked off. She further stated that all assessments would be “based on science.”

During last year’s federal election, the Liberals vowed to modernize the NEB, ensuring that "its composition reflects regional views and has sufficient expertise in fields like environmental science, community development, and Indigenous traditional knowledge." Further, they promised to end ministerial interference in environmental assessments and ensure they included an "analysis of upstream impacts and greenhouse gas emissions resulting from projects.”

Provincial First Nations assemblies in B.C., Manitoba, Quebec and Labrador, in a joint letter sent to the Prime Minister last month, insisted that the PM cancel the regulatory reviews of proposed pipeline projects until after the NEB overhaul takes place.