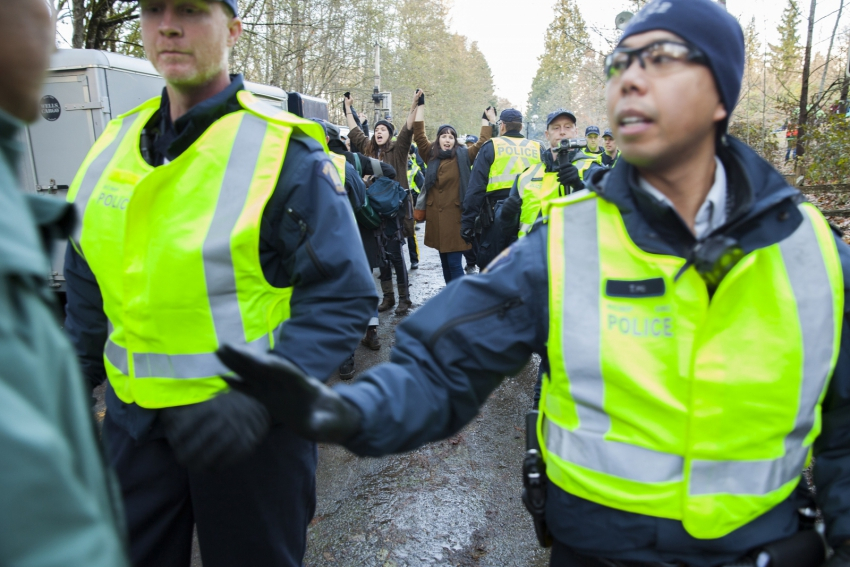 The Liberal government is expected to announce its pipeline legislation review shortly, which was promised during the election campaign—to restore the credibility of environmental reviews that had been damaged during the Harper government.

Will the pipeline review include changes to allow questions around climate change? More consultation with First Nations? Or will the reviews open up to more participation from the public, which became extremely restricted under the changes to the National Energy Board Act under the Harper government in 2013?

Eugene Kung, a lawyer for the Tsleil-Waututh First Nation in B.C. that is seeking a court order to stop the Kinder Morgan Trans Mountain hearings, said details of the new changes have yet to be released.

Given the Liberal government's statements at COP21, any changes may very well include more consideration of an oil pipeline's effect on climate change, he said.

"One of the biggest critiques of the current processes is that they don't consider climate impacts of either the tar sands expansion (upstream) or the burning of the oil (downstream)," Kung said. "Given the strong language about taking climate seriously, in particular in Paris, a climate test makes sense."

While it remains unclear if the National Energy Board's reviews will become more inclusive — currently, only those "directly affected" by an oil pipeline going through their property are able to become interveners at hearings — he said the Liberals have emphasized that only "communities" can grant consent."

"The current process has shut out the public from meaningfully participating and engaging," Kung said.

Talks with Indigenous and environmental groups

"More details on transition plans for projects such as the Trans Mountain expansion, which are already in the existing National Energy Board process, will be provided in the coming weeks," Natural Resources spokesperson Micheline Joanisse told National Observer. "No project will be required to return to square one."

"In the meantime, the National Energy Board must continue to operate under its current mandate."

Joanisse said both Carr and Environment and Climate Change Minister Catherine McKenna are working "intensely and collaboratively" across government to develop the proper approach to the consultations and redrawing of the legislation.

"The government has committed to transition plans for important natural resource projects while we undertake longer term decisions on science, facts and evidence, and aligning with Canada's commitment to do our fair share on climate change," she said.

Joanisse confirmed that over the last two months, McKenna and Carr have met with a number of environmental and Indigenous groups to discuss and share views around the reviews.

"It is unrealistic and unwise for the government to rush through these important short-term and long-term regulatory changes given the importance of the issues of environment, climate change and sound energy decisions," Joanisse added.

A tricky balance: environment and economy

“I don’t think it’s going to be an easy process, but at the same time, it is something that needs to be done,” said Andre Plourde, a resource economist and the dean of the Faculty of Public Affairs at Ottawa’s Carleton University. He said the review of legislation governing pipelines, environmental assessments and the National Energy Board will be complicated and won’t happen overnight.

In 2010, Plourde co-authored the report on the Royal Society of Canada Expert Panel: Environmental and Health Impacts of Canada’s Oil Sands Industry. He warned that the review is liable to generate controversy.

“You’re going to have very different views about this.”

Because the review process for the pieces of legislation isn’t something that will be accomplished quickly, Plourde believes the Kinder Morgan and TransCanada projects will move ahead under the existing legislation.

Peter McKenna, the head of the political studies department at the University of Prince Edward Island, agrees that balancing pipeline economics with environmental interests is going to be challenging for the government.

“It’s going to be a very difficult juggling act for them because any sort of beefed-up regulations or rolling back of what Mr. Harper had in place and extending environmental assessments and insisting on more consultations with First Nations is going to be seen as a step backward and as a means of trying to throttle and suppress development in the oil sands in Alberta,” McKenna said.

Both Alberta and Saskatchewan are likely to react negatively to any measures to limit oil sands development, McKenna said.

The other problem the government faces is blow-back from groups opposed to oil sands development.

McKenna said the government might be operating under the assumption that changes to the legislation will “buy some peace” among civil society and environmental groups, First Nations and the general public.

“I’m not so sure that’s the case,” McKenna said, who noted for the above groups it’s more about halting any further oil sands development to prevent climate change impacts.

“I don’t think the kinds of changes that they’re proposing are actually going to placate opponents to the oil sands, who really prefer the oil would stay in the ground.”

Adding to the pressure on the government is the sagging economy and the precipitous decline in the price of oil, which sank below $30 a barrel on Friday.

McKenna pointed out that it’s difficult to see how the Liberal government will turn the Canadian economy around and balance the books by 2019-2020 without a resurgence of the oil sands and an uptick in the Alberta economy.

Lucille Jamault, manager of communications with the Canadian Environmental Assessment Agency, said the government plans to review environmental assessment processes and decisions to see how they can ensure they are based on science, facts and evidence and serve the public’s interest.

According to Jamault, the details of the review are under development and the government will outline its approach in the coming months.

Erin Flanagan, the program director of federal policy for the Pembina Institute think tank, believes the government’s review and subsequent changes will add up to more than just a rubber stamp for new projects, particularly because she says the Liberals are talking about introducing additional First Nations' participation in hearings.

"In my mind there has to be time to get this right and so projects that are currently under review at the board may need to have policy direction from this government, preferably before the review begins, particularly with Energy East," Flanagan says. "A hearing order hasn’t been issued yet for that project so there’s still time to provide certainties to the regulators and provide certainty to the public that that review will be conducted in a different way."

But at the same time, she says that if the government wants to regain public trust, it will need to ensure that the process is far and bringing all evidence to bear in order for the public to believe the decisions are being made in their best interest.

“So far, on the question of climate change, that just hasn’t been true, so we’ve seen individuals, organizations and Indigenous communities push back against that as the status quo because it simply isn’t serving their interest.”