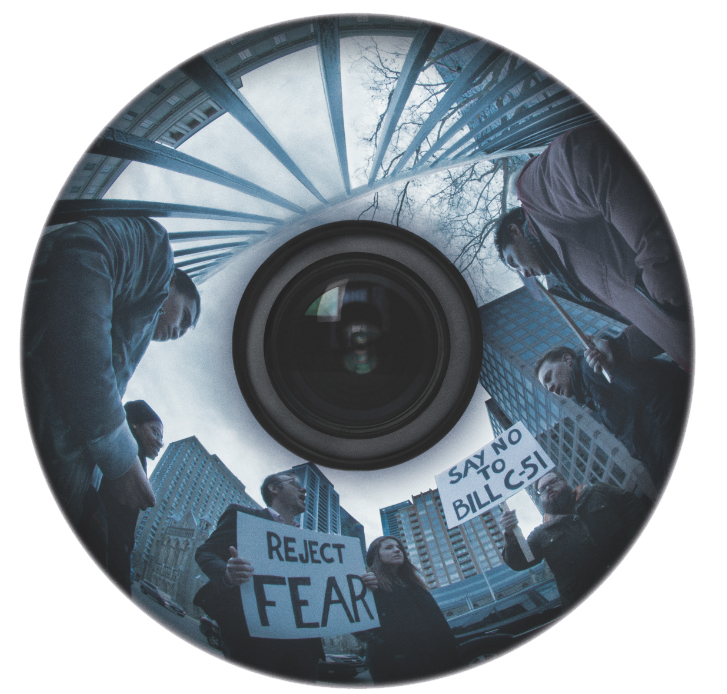 That’s the provocative question Canadian Journalists for Free Expression (CJFE) are asking this week as part of an awareness campaign meant to push Bill C-51 back into the national spotlight.

As part of its #MyPrivacy campaign, CJFE has put together an online photo booth that allows people to snap an image of themselves and post it on the CJFE’s website.

The resulting shots are disturbing, surveillance-like images of people caught within the eye of a camera lens.

“The visual representation of the increased privacy violations we face provides a startling reminder of the dangerous surveillance infrastructures that can go easily unnoticed, the CJFE said in a statement.

The campaign is part of a Bill C-51 week of action from January 18 to 24. During the week a range of civil society organizations will press the government for broad consultations on C-51 legislation and encourage Canadians to contact the offices of their ministers and local MPs to talk about Bill C-51.

CJFE’s #MyPrivacy campaign joins the efforts to engage the public in a national dialogue about Bill C-51 and hold the government accountable for their consultation promises and responsibility to protect Canadians’ rights and freedoms.

The campaign follows a Charter challenge filed by CJFE and the Canadian Civil Liberties Association (CCLA) in July on the grounds that five sections of Bill C-51 unjustifiably violate the Canadian Charter of Rights and Freedoms.

Since coming into power, the Liberal government has promised to repeal what they deem the “problematic elements” of the bill, and recently announced an intention to hold a broad consultation process.

In their election platform the federal Liberals promised to introduce new legislation that would guarantee that all Canadian Security Intelligence Service warrants respect the Charter of Rights and Freedoms; and ensure that Canadians are not limited from lawful protests and advocacy.

The new legislation would also require that government review all appeals by Canadians on the no-fly list, and limit Communications Security Establishment’s powers by requiring a warrant to engage in the surveillance of Canadians, among other things.

In early January, Public Safety Minister Ralph Goodale told Canadian Press that Canadians would be consulted and that consultation would help guide changes to Bill C-51.

The Liberal government is open to an expansive revamp of national security legislation, not just a handful of promised changes to the controversial bill known as C-51, says Public Safety Minister Ralph Goodale.

"The subject matter is large, it's complex, the solutions aren't particularly easy to achieve. But our whole point in having consultations is to listen to what we hear. And if the messages indicate that something more needs to be done, obviously we would try to pursue that,” Goodale said in an interview with Canadian Press.

Goodale is tasked to work with Justice Minister Jody Wilson-Raybould on new legislation around the bill.

“No legislation has had more of an impact on free expression and civil liberties in recent history than C-51,” says Tom Henheffer, CJFE’s executive director said in a statement. “It is dangerously over-broad, unjustifiably encroaches on the rights of Canadians, and needs to be scrapped or dramatically amended.”

A petition against the bill has attracted more than 300,000 signatures.