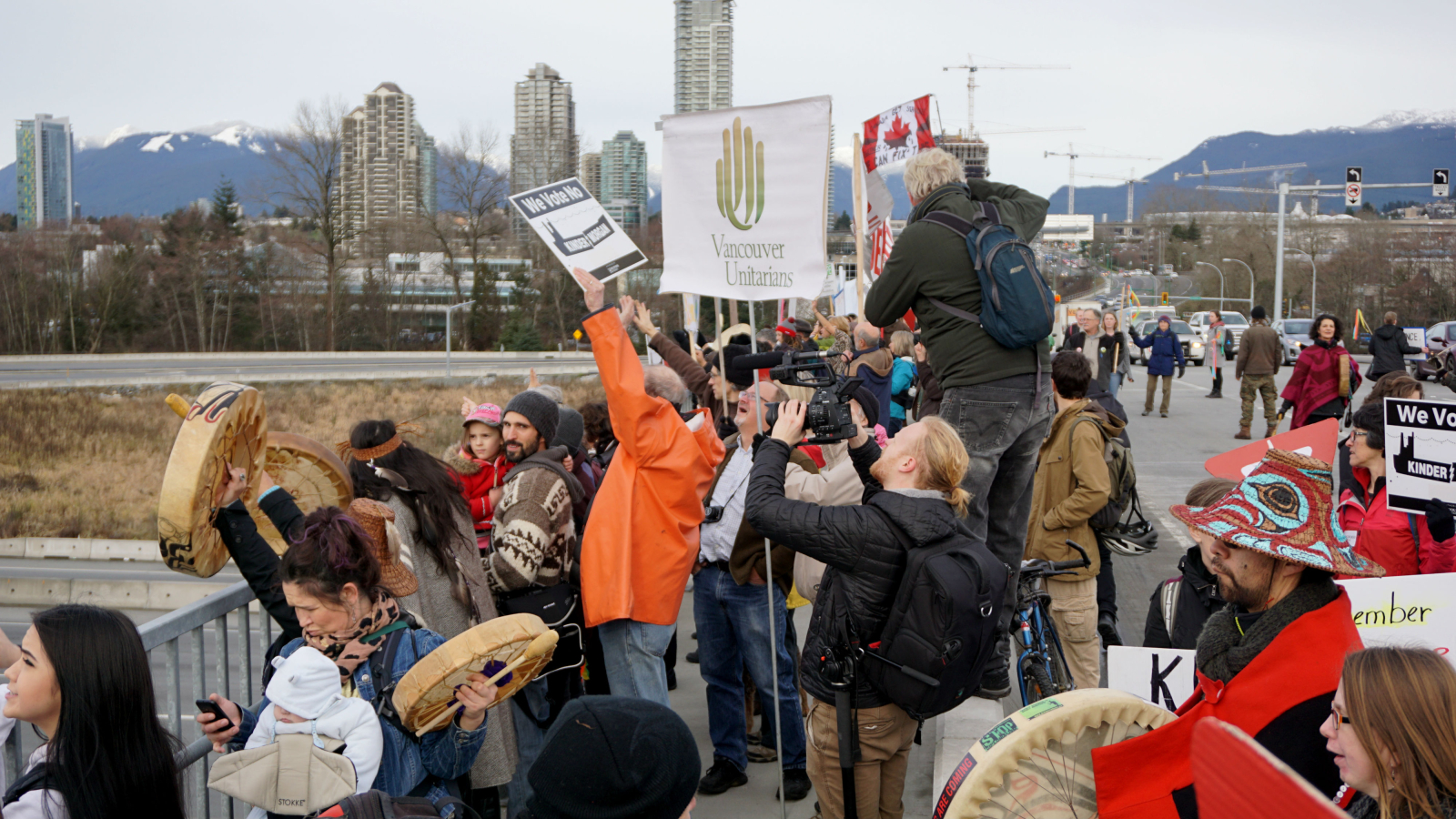 Demonstrators take over the Willingdon overpass in Burnaby, B.C. in protest of the Kinder Morgan Trans Mountain pipeline expansion and the NEB hearing currently under way. Photo by Elizabeth McSheffrey on Tues. Jan. 19, 2016.
Previous story
Next story

Their voices rang loudly and clearly on a grey afternoon in Burnaby, B.C.

"NEB is a sham!" shouted protesters, swarming the outer lanes of the busy Willingdon overpass at lunch hour on Tuesday. "Trudeau, we said no!" "Kinder Morgan, make my day, take your pipeline, go away!"

Their cries were enhanced with fog horns, drums, whistles and songs, and did not stop until all had reach the doors of the Delta Burnaby Hotel and Conference Centre, where the National Energy Board (NEB) reviewed Kinder Morgan's controversial Trans Mountain pipeline expansion in a formal hearing. They wore face paint, feathers, traditional Indigenous blankets, and expressions ranging from exhilaration to contempt. They vowed not to stop until their case was won.

"This project does not benefit us, not only as citizens but as human beings," said Carleen Thomas of the Sacred Trust Initiative for the Tsleil-Waututh Nation. "The scope is so narrow. How can a regulatory process not consider the impacts of climate change?"

The Trans Mountain expansion, if approved, would add 980 kilometres of new pipeline to a system that already transports 300,000 barrels per day of crude oil and refined petroleum from Alberta to refineries and marketing terminals in Vancouver and Washington State. It has been hotly-debated since its proposal and is the current subject of a federal court case launched by the Tsleil-Waututh Nation.

Calls for its rejection are not only based on environmental concerns, said activists, but issues of Indigenous consent, a negative financial impact on municipalities, and a "fraudulent" federal review process.

"We're here to change the fundamentally flawed NEB process," said Grand Chief Stewart Phillip of the Union of BC Indian Chiefs. "The outstanding question of today is, Prime Minister Trudeau, where are you?" he asked.

During the election campaign, the Liberal party promised to review and overhaul Canada's environmental assessment process, including the NEB. It also vowed to consider upstream impacts and greenhouse gas emissions resulting from projects, not only for new projects, but existing ones as well.

If the Trudeau government doesn't step in, said Stewart, it will have profoundly disappointed those who put their faith in his leadership on Oct. 19, 2015.

"We expect him to follow through on those commitments," he told a roaring crowd. "They gave us hope after 10 years of the long dark night of the Harper regime."

A broken system; an Indigenous issue

According to NEB regulations, only interveners and accredited media are permitted in the hearing room, while the proceedings will be broadcast online for the public. The procedure is evidence that the system is dysfunctional, according to the City of Burnaby, one of many Vancouver-area municipalities that has vehemently opposed the project.

"This should have been stopped a long time ago when it was said that the hearing is a sham, doesn't represent Canadians, and is not transparent," said Burnaby Coucillor Sav Dhaliwal. "A public hearing minus the public! What kind of public hearing is that?"

"I'm so tired of the shit," agreed Musqueam activist Audrey Siegl. "What is being pushed on us — not only is it wrong, it's amoral."

"Our existence on our own land as First Nations people is an inconvenience to this government because we remind them that they failed in their mission to eradicate us."

A victory in rejecting the Kinder Morgan pipeline is a victory for all, she told protesters, calling on the public to keep up its energy, remain strong, and fight in solidarity to bury the pipeline expansion proposal. Speaking after Siegl, Chief Aaron Sam of the Lower Nicola Indian Band withdrew his nation as an intervener in the NEB hearings in protest of the system.

The NEB hearings will continue until Jan. 20 before moving onto to Calgary, Alta. The Trans Mountain expansion is a $5.4 billion project expected to triple the pipeline’s carrying capacity, generate at least 4,500 construction jobs at peak employment, and $23.7 billion in additional taxes and royalties for provincial and federal governments.

Photos from the protest