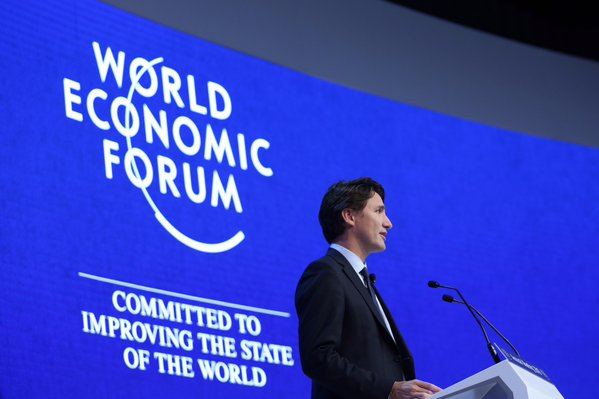 At home, some media may be dismissive of Prime Minister Justin Trudeau’s foray to Davos, Switzerland. But the international press remains agog at Canada’s leader.

The editorial board of the influential paper, The Christian Science Monitor, gave Trudeau a rousing endorsement late Thursday in an editorial titled, For a World in Gloom, a New Torch-Bearer.

“Justin Trudeau, the prime minister of Canada only since November, exudes a youthful idealism about solving problems, preferring to see light where others see dark,” the paper’s editorial board wrote.

The Science Monitor said while German Chancellor Angela Merkel certainly deserved Time Magazine’s designation of her as Person of the Year in 2015, they added, “in 2016 another national leader, fresh on the world stage, has set an equally admirable tone about dealing with global challenges, which are currently creating an air of gloom.

“In fact, he was selected as the keynote speaker for this week’s gathering of the World Economic Forum in Davos, Switzerland.”

In contrast, back home, the Financial Post, carped: “Trudeau’s ‘Sunny-Ways’ marketing may have amused the Davos elites, but it’s cold comfort to the estimated 100,000 people back home who lost their direct and indirect oil and gas jobs over the past year, or their homes and businesses, or their life savings.”

The Science Monitor did note that Canada is currently divided on whether it wants to be a global citizen on climate change at the same time the country’s economy remains dependent on selling fossil fuels.

Noted the editorial board: “With oil prices sinking, Trudeau has chosen to highlight Canada’s nonmaterial strengths. He told potential investors at Davos that Canada should be known more for its ‘resourcefulness’ than its natural resources.”

It’s a certainty back in Canada Trudeau’s long honeymoon will have to come to an end; the City of Montreal pushed back on TransCanada’s Energy East pipeline today, causing an equally strong reaction from Calgary’s mayor over it’s necessity.

And in British Columbia, the National Energy Board hearings over Kinder Morgan’s proposed Trans Mountain pipeline extension is attracting protests and acrimony.

As the Liberal government begins to launch what appears certain to be a lengthy pipeline assessment review, it will find itself increasingly under pressure from both oil interests, including the beleaguered province of Alberta, and environmentalists who oppose further development of the tar sands.

But for now, Trudeau can bask in the approval of the international community.

In Davos, the meeting’s focus is mastering the “fourth industrial revolution,” or the effect of intelligent technology on society and business, according to the Science Monitor.

“‘Trudeau was chosen as keynote speaker, says Klaus Schwab, the German economist who presides over Davos, because ‘I couldn’t imagine anybody who could represent more the world which will come out of this fourth industrial revolution.’”