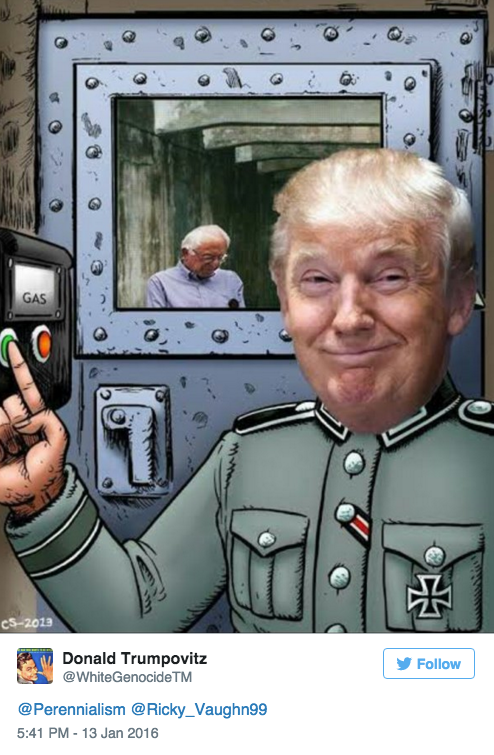 However, this seemingly innocuous post was actually a retweet from the acount @WhiteGenocideTM. This account mockingly endorses Bernie Sanders for president, but actually retweeted last Friday a drawing of Donald Trump in a Nazi uniform, hitting the switch on his Democrat - and Jewish - rival in a gas chamber.

A quick look at the @WhiteGenocideTM account reveals that it used the moniker 'Donald Trumpovitz' at the time it retweeted the picture of Sanders in a gas chamber. Since then, it has changed its name to 'Bernie 4 Prez'. Alongside the gas chamber picture, the account has also posted other anti-Semitic drawings such as this:

However, the Trump Twitter account's latest retweet ties in with a wider trend of wider support for the billionaire candidate by white nationalists, including backing from figures such as former Ku Klux Klan official David Duke, who praised Trump on his radio show. White Nationalist websites such as Stormfront have also seen an uptick of people discussing Trump's candidacy.

On Jan. 11, voters in Iowa received robocalls urging them to vote for Trump sent out by the American National Super PAC, a white nationalist outfit funded by American Freedom Party chairman William Johnson. But the Southern Poverty Law Center says the American Freedom Party "is a political party initially established by racist Southern California skinheads that aims to deport immigrants and return the United States to white rule," as quoted by CNN.

As white nationalists get behind Trump's policy positions such as banning Muslims from travelling to America and kicking out Syrian refugees, civil rights organizations have voiced fears that Trump's rhetoric is fueling a rise in Islamophobia and hate crimes.