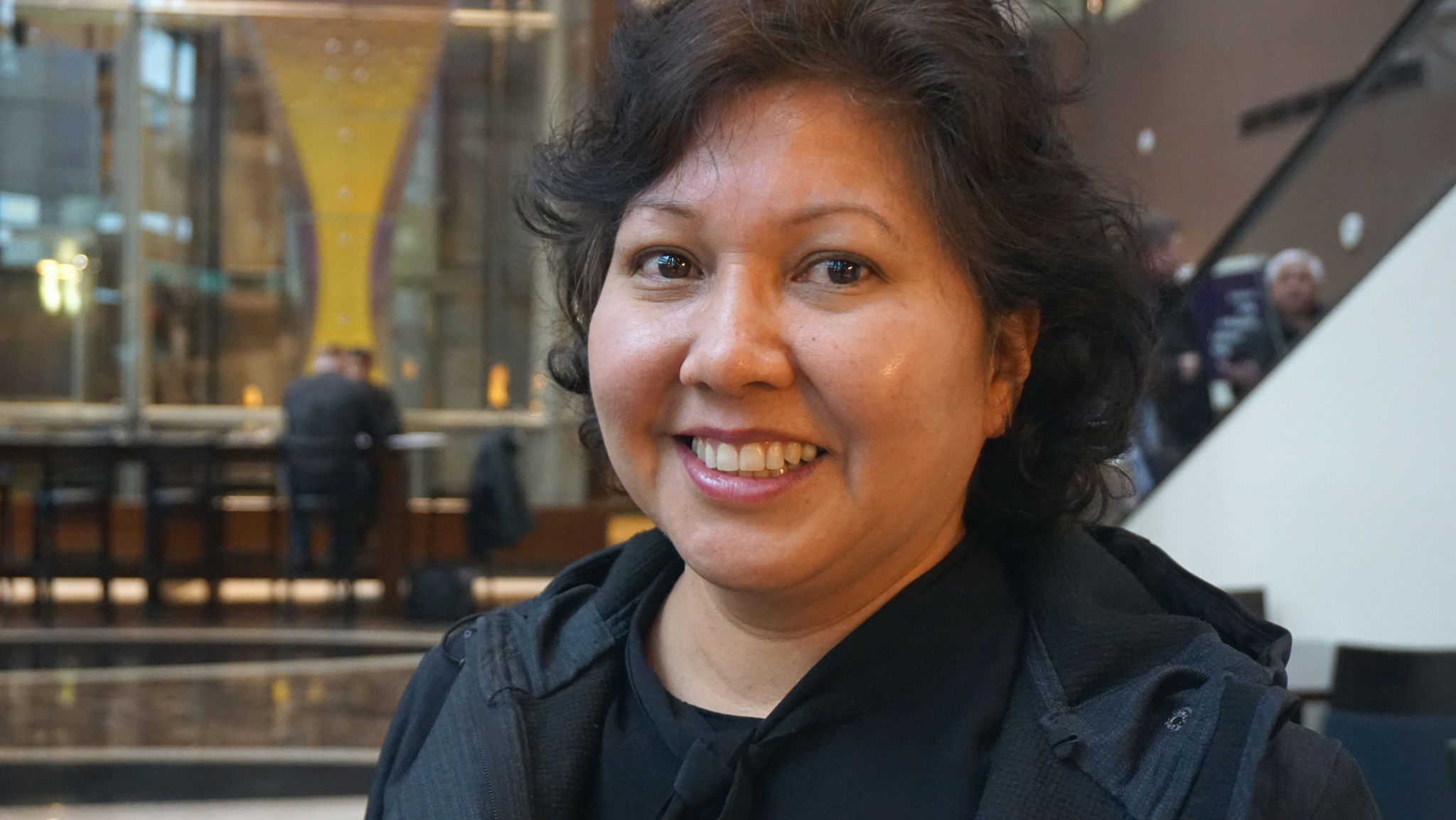 Tsleil-Waututh Councillor Charlene Aleck felt "hopeful" that justice would be served by the National Energy Board during the Kinder Morgan Trans Mountain expansion hearings in Burnaby, B.C. on Tues. Jan. 26, 2016. Photo by Elizabeth McSheffrey.
Previous story
Next story

Tsleil-Waututh Councillor Charlene Aleck painted a vivid picture of colonization outside the National Energy Board (NEB) hearings for the Trans Mountain pipeline expansion on Tuesday morning.

"They came for our land," she told National Observer after the B.C. First Nation's lawyers had argued their case before NEB panelists. "They made boundaries on the ground and said, ‘This is where you’ll live, it will be called an Indian reserve.’ Then, they came for our children, they came for our culture. If we gathered anymore than four people, we were put in jail."

The existing Trans Mountain pipeline — a project of Texas oil giant Kinder Morgan — was built in 1953 and ploughed through the traditional territory of the Tsleil-Waututh Nation, which stretches from Mount Garibaldi in the north, Coquitlam Lake in the east, Howe Sound in the west, and the Fraser River in the south. The heart of the community however, is centered around the Burrard Inlet, where if approved, the proposed pipeline expansion would increase tanker traffic seven-fold.

When construction first occurred in 1953, there was never any consultation, consent, or conversation. But times have changed, Aleck explained, and history will not repeat itself.

"We’re not living in the 50s anymore," she told National Observer.

The Tsleil-Waututh have led the opposition to the hotly-debated pipeline expansion since its proposal in 2013, supported by a handful of other Indigenous communities and major Metro Vancouver municipalities. The project seeks to triple the capacity of an existing system that transports 300,000 barrels of refined petroleum and crude oil per day from the tar sands in Alberta to marketing terminals and refineries in Vancouver and Washington.

According to the nation's extensive, science-based assessments of the project, if constructed, the expansion would result in "catastrophic" ecological, economic, and cultural damage, much of which would be "impossible to mitigate," argued lawyer Scott Smith.

A major oil spill would obliterate or permanently alter precious marine ecosystems in the Burrard Inlet, he argued, including the shellfish, herring, and salmon the First Nation relies on for cultural ceremonies and subsistence economy. The increased tanker traffic would also pose a major threat to the vulnerable southern resident killer whale population.

Smith encouraged the NEB to place little weight on the "inadequate evidence" presented by Trans Mountain, which Elizabeth May criticized last week as being largely "repetitive, useless garbage." In the end, on behalf of the Tsleil-Waututh, he demanded that the NEB reject the proposal.

"These infringements would occur in the core of Tsleil-Waututh's territory for the life of the project and they would not be limited to isolated events," he said. "The Tsleil-Waututh has made an informed decision to withhold its consent."

Outside the hearing room, Coun. Aleck likened the passing of the project to the cultural genocide committed by the Canadian government through colonization of Indigenous territory and the Indian Residential School system. The Tsleil-Waututh are the second First Nation to have made this comparison over the course of the Burnaby hearings.

"Our bloodline goes right back to the inlet," she told National Observer. "That’s where our first grandmother came from, so what would happen to us is that culture — that lineage — would be severed once again. It’s the sustenance of our traditions, our ceremonies, and who we are as a people would be damaged.

"It would be like back in the 50s where we would have no voice, no say, and everything taken away."

In October last year, the Tsleil-Waututh an launched a lawsuit against the NEB for its review of the Trans Mountain expansion, citing "serious legal errors made by the federal Crown and NEB" that led to a "flawed and unlawful" review process that puts residents of coastal B.C. at risk. The nation accused the previous Harper government of failing in its constitutional duty to consult its community, and is seeking a court order to stop the current NEB hearings.

While their case is under review in federal appeal court, the Trudeau government has promised to restore public trust in the NEB by overhauling environmental assessments, and renew Indigenous relationships with the government in the spirit of reconciliation and partnership.

The former has not yet occurred, said Aleck, and the latter is currently underway. Either way, the promises give the Tsleil-Waututh hope that the Kinder Morgan expansion will fall flat before the cabinet.

“I wouldn’t say ‘confident,’ but I’m feeling hopeful," she explained. "[Trudeau] himself acknowledges when he’s in the territories of the Algonquin or the Mi'kmaq, or even the Coast Salish people when he’s out here. So there’s a glimmer of him stepping up to being in the 21st century, that he is acknowledging the caretakers of the land we’re in."

Just in case in the project goes through however, she added that the First Nation is prepared to take its legal battle against the project as far as necessary to see it put to rest for good.

WATCH: Tsleil-Waututh "hopeful" that justice will be served

Tsleil-Waututh project manager Carleen Thomas of the Sacred Trust Initiative is cautiously optimistic that the National Energy Board will make the right call and cancel the Kinder Morgan Trans Mountain pipeline expansion for good. Video by Zack Embree.