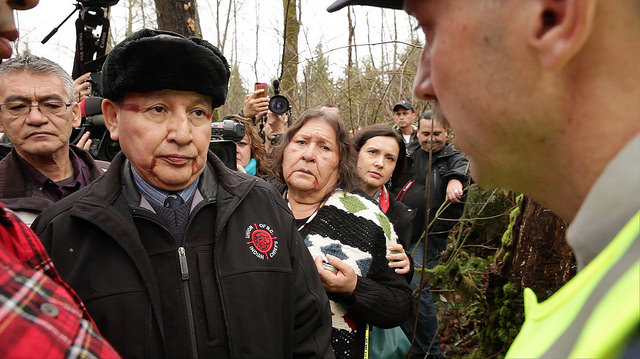 Canada's national energy regulator is welcoming plans to get tougher with pipeline reviews, but regional Indigenous chiefs representing 203 First Nations in British Columbia, Manitoba and Quebec say they are not satisfied, and want the government to do more.

Noting that they were not consulted about five new principles announced by the Liberal government on Wednesday — which promised deeper consultations with Indigenous people — the First Nations chiefs said that they remained opposed to current plans for pipeline expansion.

The newly-elected government also pledged to require a review of carbon pollution associated with new projects, while extending the length of some reviews and guaranteeing that no company would have to restart its application process.

But the reaction from the chiefs makes it more difficult for the federal Liberals to deliver on an election campaign promise to help Canada's slumping oil and gas companies build infrastructure for access to new markets and customers.

Environment and Climate Change Minister Catherine McKenna and Natural Resources Minister Jim Carr said this week that they were toughening rules for pipeline reviews in order to restore public trust in the process. The Liberals have said this process was tainted by substantial changes introduced by the previous Conservative government led by former prime minister Stephen Harper that reduced oversight and restricted public participation in reviews.

McKenna said on Wednesday that no projects could be approved if there was no public trust.

The chiefs said they were concerned about a lot of unresolved issues including uncertainty about whether the new climate change test will reflect what they describe as the “urgency” of phasing out fossil fuels and reducing carbon pollution.

“The process is done and it was carried out under those bogus Harper rules,” said Grand Chief Stewart Phillip, the president of the Union of British Columbia Indian Chiefs on Thursday. “There will now be more consultation according to yesterday’s announcement but that is something that Canada is already required to do under the Constitution. What needs to be demonstrated is the federal government’s willingness to take no for an answer from First Nations like Tsleil-Waututh Nation, who are exercising their sovereign decision-making power.”

The Tsleil-Waututh Nation in British Columbia has an ongoing court challenge against the National Energy Board’s review of the Kinder Morgan Trans Mountain pipeline expansion project.

The NEB welcomed the changes introduced by the government, explaining that they would add measures to “supplement the rigorous regulatory reviews” that it conducts.

"These additional measures will provide confidence for Canadians who are more engaged than ever in the discussion about energy infrastructure,” said NEB spokesman Craig Loewen. “The NEB remains committed to a rigorous environmental assessment and regulatory review of projects and will implement the interim measures.”

There are two other major crude oil pipeline expansion projects under review by the NEB, which is the Canadian pipeline regulator. The Liberal government announced its new principles would apply to reviews of TransCanada Corp’s proposed Energy East pipeline and to Kinder Morgan’s Trans Mountain Expansion.

But the Liberals didn't mention whether any of the changes they were proposing would affect the ongoing review of Enbridge’s Line 3 pipeline replacement project, which is another expansion project that would link Western Canadian oil producers to the U.S. market through Manitoba. Enbridge describes this expansion as the largest project in its history, modernizing and expanding the capacity of its Line 3.

Grand Chief Derek Nepinak from the Assembly of Manitoba Chiefs said the threat of climate changes means that the government must consider whether “we will survive as a civilization” and whether there will be any economy left to salvage in the future.

“Our First Nations were shocked, therefore, to see that no measures at all were announced to address Enbridge’s Line 3 pipeline project, which was also reviewed under the dysfunctional NEB process.”