Website welcomes Americans to Cape Breton if Trump is elected 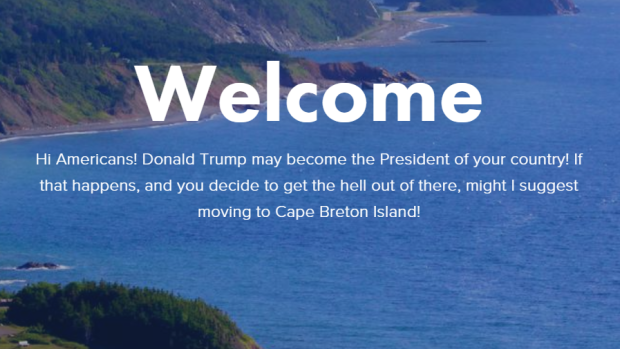 A page from the website inviting Americans to Cape Breton. Courtesy of cbiftrumpwins.com
Previous story
Next story

A new website greets visitors with the message: “Hi Americans! Donald Trump may become the President of your country! If that happens, and you decide to get the hell out of there, might I suggest moving to Cape Breton Island!”

The site is the work of a Cape Breton disc jockey, according to a CBC News story. Rob Calabrese, a radio host in Sydney, Nova Scotia, put together the site, telling the broadcaster that every American election a group of people declares they’re going to move to Canada.

"Hey, if you're going to move to Canada, why not move to Cape Breton?" Calabrese rhetorically asked.

His website urges people: “Don't wait until Donald Trump is elected president to find somewhere else to live!

“Start now, that way, on election day, you just hop on a bus to start your new life in Cape Breton, where women can get abortions, Muslim people can roam freely, and the only 'walls' are holding up the roofs of our extremely affordable houses.”

Declares the site: “This is not a joke! See for yourself, you belong here with us on Cape Breton Island, where health care is free, you know your neighbours and they look out for you, and nobody has a hand gun!”

The site includes a link through to the official Cape Breton Island website.

Since launching the site on Monday, Calabrese has had a number of people - including a professor from Cornell University - contact him about moving to the island, he told CBC.

"They're asking genuine questions about things like the immigration process, the economics. It's been taken seriously by some people, which is great and not intended, but I'm going to help them out as best I can,” Calabrese told the broadcaster.