Seasonal sun: N.W.T. village intends to go solar, but only in summer 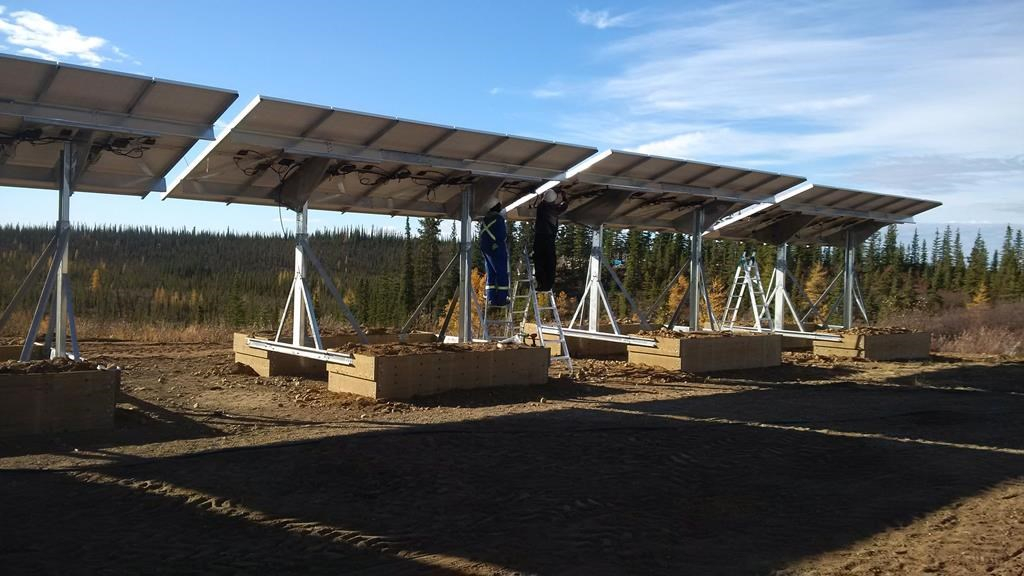 Workers attend to a solar array in the town of Colville Lake. Photo: Canadian Press
Previous story
Next story

While the rest of Canada talks and talks about reducing reliance on fossil fuels, one tiny northern town is leading the way in actually doing it.

Colville Lake, high in a corner of the Northwest Territories, has successfully tested a system of batteries and solar panels that should allow the community to run entirely on the sun’s energy — at least in the summer.

"There is really no other community that I know of that is structured this way," said Myra Berrub, manager of energy services for the Northwest Territories Power Corp.

Colville Lake, a Dene community of about 150, needed to replace its aging diesel generator. The corporation installed a new one, but supplemented it with batteries and an array of solar panels capable of generating 136 kilowatts.

When it’s dark, Colville Lake runs off diesel. The batteries save fuel by absorbing and storing any power in excess of demand, so the generator always runs at maximum efficiency.

As more light returns after the dark days of winter, the use of solar power will expand until it meets all the community’s needs.

The community now sees about eight hours of low−angle sunlight a day. By late May, sunlight is virtually 24−hour.

It’s a small solar station, but Berrub said Colville Lake banking so heavily on it makes it unique.

"There are other communities that have large solar arrays, but the uniqueness of this installation is that it’s a remote community. It’s not on a grid, so you don’t have the grid to help you smooth out any bumps."

The project is being carefully watched.

Power is a big issue across the North. Outside of Yukon’s hydroelectric development, most Canadian Arctic communities depend on giant diesel generators that get their expensive, high−carbon fuel delivered over ice roads and on barges.

Some renewable sources are already functioning in the Arctic.

Biomass — also known as "wood stoves" — heats many homes. Wind turbines have been installed outside Whitehorse as well as in Rankin Inlet, Nunavut.

"If costs do come down in the future and net savings are there, it would certainly be something we would consider for other communities."

So far, solar power does cost more than diesel — mostly because of the expensive batteries, said Berrub. The $7.8−million system received a $1.3−million subsidy from the territorial government.

There are other benefits to moving away from diesel.