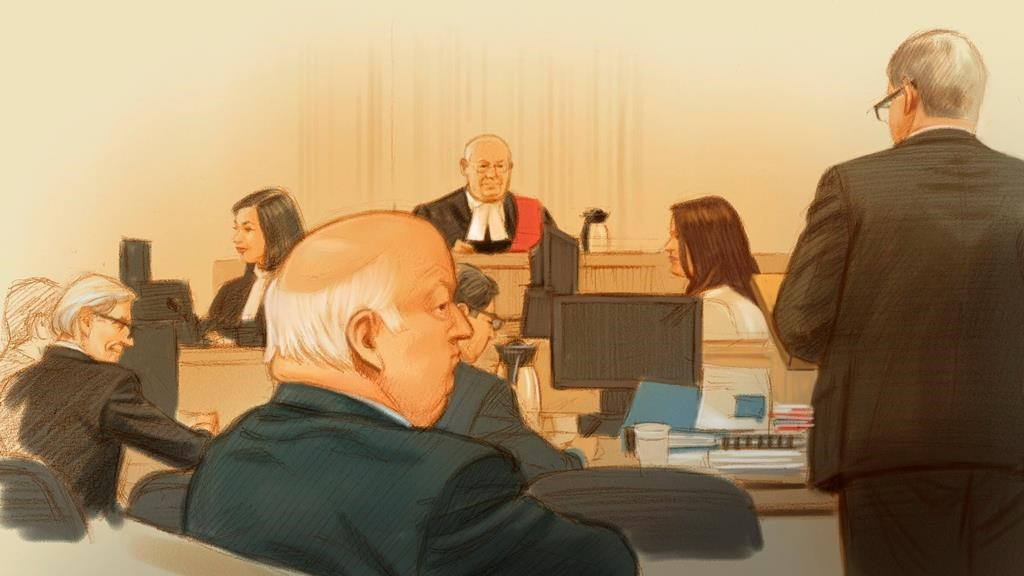 Arguments in the landmark and lengthy trial of Sen. Mike Duffy concluded Tuesday with the justice hearing the case saying the earliest he'll deliver his verdict is April 21.

Justice Charles Vaillancourt must now decide whether the former Conservative is guilty or not on 31 counts of fraud, breach of trust and bribery for the way he handled his expenses while serving in the Senate.

The decision will likely have repercussions for at least two other senators awaiting trial on similar accusations. It may also mean that charges could be laid against still others following exhaustive audits into Senate expenses.

But the Ottawa political climate and culture that led to the 10-month Duffy trial have changed with the arrival of a new government and public interest in the issue has all but evaporated — the final two days of arguments were held in a different, smaller, courtroom with only a few ordinary spectators on hand.

"The man has been through a tremendous ordeal, he has been humiliated and ridiculed and that will continue to go on. Few have ever been in his position," defence lawyer Donald Bayne said in his final address to the court on Tuesday.

"Crown took a great deal of time to say you can't believe everything he says. You don't have to acquit him on this evidence . . . the evidence as a whole proves that the Crown has not made out this case beyond a reasonable doubt."

It's been eight years since Duffy was appointed a Conservative senator for P.E.I.. The Senate is still grappling with the fallout from the ethics scandal that engulfed it after questions raised about his expenses eventually led to the criminal charges against him.

Duffy has pleaded not guilty to all counts.

The first 28 charges relate to living, travel and office expense claims he filed in his first four years in Senate, while he was criss-crossing the country as one of his party's star fundraisers.

Those trips, the living expenses he charged for the Ottawa-area home he's had for decades and the money from his Senate budget that he spent on services the Crown alleges would never have been approved by the Senate, are at the heart of these charges.

The Crown, in its closing arguments, argued that one $65,000 contract amounted to a "slush fund," but Bayne said it was in keeping with the Senate's allowance for a research budget. He said senators had full discretion over how to spend that money.

"You don't set up a criminal slush fund so you can get legitimate Senate work done," Bayne said.

The final three counts relate to a $90,000 payment Duffy accepted from Harper's former chief of staff in order to repay his questioned expenses. The Crown contends the cheque amounted to bribery because it was a deal brokered by Duffy, who exerted pressure on the Prime Minister's Office, which wanted the scandal to go away.

Duffy, the Crown argued this week, was only ever acting in his own best interests. The defence argues it was the opposite — that for political reasons the powerful PMO railroaded Duffy into admitting to wrongdoing when he had done nothing improper.

"Look at where he is sitting now," Bayne said, gesturing to Duffy in the front row of the small Ottawa courtroom, his wife by his side.