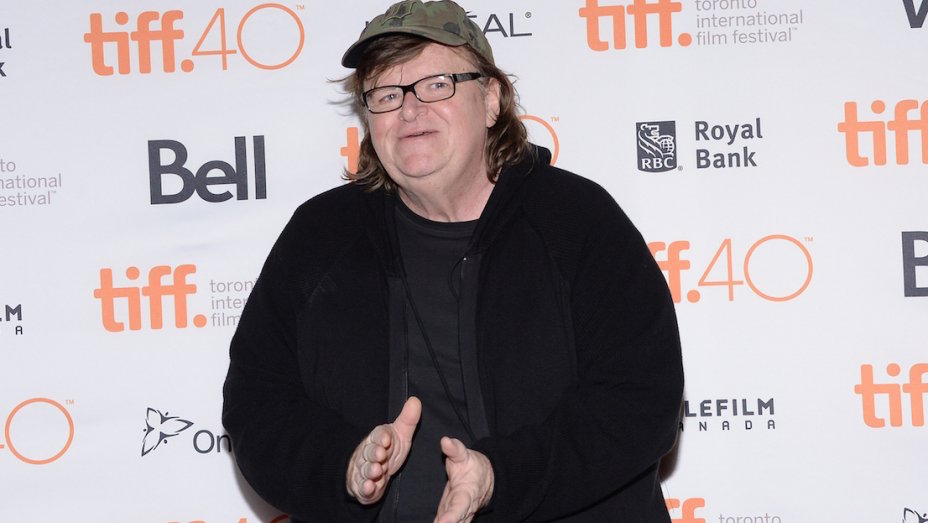 TORONTO — It couldn't be a busier time for firebrand filmmaker Michael Moore.

Between his new documentary "Where to Invade Next," the U.S. presidential race and a crisis in his hometown of Flint, Mich., the outspoken activist has no shortage of causes to champion or scandals to denounce.

But on one recent afternoon, he's reached by phone at his home in New York, resting.

A recent bout with pneumonia landed him in intensive care, forcing him to cancel a slew of promotional stints on the TV talk show circuit, the Berlin Film Festival and "this fantasy of hopping the train and going across Canada" in advance of Friday's release of "Where to Invade Next." Moore plays the role of "invader" as he visits several countries to steal ideas for improving the U.S. education, labour and justice systems.

During an interview with The Canadian Press, the Oscar-winning director sounded off on a range of topics including the U.S. primaries ("We're inside of a big clown car right now"); his disdain for mobile streaming ("Whatever you're watching on an iPhone is not a movie") and thoughts on his own mortality ("You could not be here a few minutes from now").

And Canada's supposed culpability in Flint's water disaster. It didn't take long for Moore to implicate Toronto in Michigan's environmental woes. He warned that the contaminated water crisis in his hometown of Flint — where lead from corroded pipes leaked into the city's drinking water — is everybody's problem.

The Canadian Press: These stories out of Flint are stunning and heartbreaking.

Michael Moore: No one's immune from it and everyone's responsible. Think about this. All the trash and crap that people in Toronto throw away every day, that ends up in Flint, Mich., you know. There's truck after truck after truck, every hour of every day coming across the Blue Water Bridge in Sarnia, Ont., to dump the garbage of Toronto in landfills in and around Flint. That's not even in the discussion of what's going on. Just like so many other things aren't being discussed in how Nestle is pumping out all the free, fresh water they can out of the ground (in Michigan) to bottle into what they call Ice Mountain water.

I mean, in a way, a lot of people here don't even know they're culpable.... If you're throwing out the trash tonight in Toronto, you're contributing to the poisoning of Flint, Michigan. And I'd like to have a discussion about that.

CP: How should the trash be treated?

Moore: The trash has to be dealt with in Canada. If it's produced by Canadians, if it's produced by people in a town, the people in the town have got to figure that out. Look, it's not just a problem for Toronto or Canada, it's everybody's problem. It's a worldwide problem.

You really have to be responsible for your own (crap). I mean isn't that one of the basic (things)? It's like the golden rule.

CP: "Where To Invade Next" includes stops in Italy, France, Finland and Slovenia. Why didn't you stop in Canada?

Moore: I always somehow find a way to bring Canada into my movies so I thought I would take a break. (Laughs) I knew I was going to do this movie at some point because I'd been thinking about how other countries do things for a very long time.... But in your last general election — not the one where (Justin) Trudeau (won), but the one before that — I wanted to film as one of my examples how you do your elections compared to ours.

So the election season goes five to eight weeks, a member of Parliament is limited to a very small amount of money to spend, the CBC provides equal time for the five parties that qualify.... But most importantly what I liked was the fact that in many places ... you guys have always voted with a No. 2 pencil on a white piece of paper. It's so basic and so simple and so not corruptible....

It was just a time thing. Maybe I'll use it with another election thing some other time. I don't know. I always have lots of Canadian ideas going on in my head.

CP: What do you think of the diversity debate surrounding the Oscars?

Moore: I support Spike Lee and Jada Smith and others, who have decided to boycott it.... Something's really wrong. It's not so much wrong with the Oscars, it's really about the industry itself. I belong to the directors' guild, I belong to the writers' guild, and I forgot what the statistic was but I think like 74 per cent of the directors' guild are white men and I think it's higher in the writers' guild.

So it's an issue with race and it's an issue with women. And it has to get fixed. The audience is the loser in this case because if you don't allow large chunks of the population the access, the ability to tell their stories, then we're missing out on some great stories, you know. I plan to be more active in trying to fix that.

CP: Are you boycotting the Oscars?

Moore: I chose not to go and I won't be watching.

In part, I've got other things that I'm going to be doing. I'm helping, at least from a distance ... Ava DuVernay and Ryan Coogler and other African Americans who are coming to Flint on Sunday to do a benefit and a thing for the people in Flint. They're going to live stream it so you could watch it anywhere and that's how they've chosen to spend Oscar night, is in Flint, Michigan....

I wouldn't say so much that there are some of us boycotting the Oscars, I believe that the Oscars have boycotted our fellow African Americans.