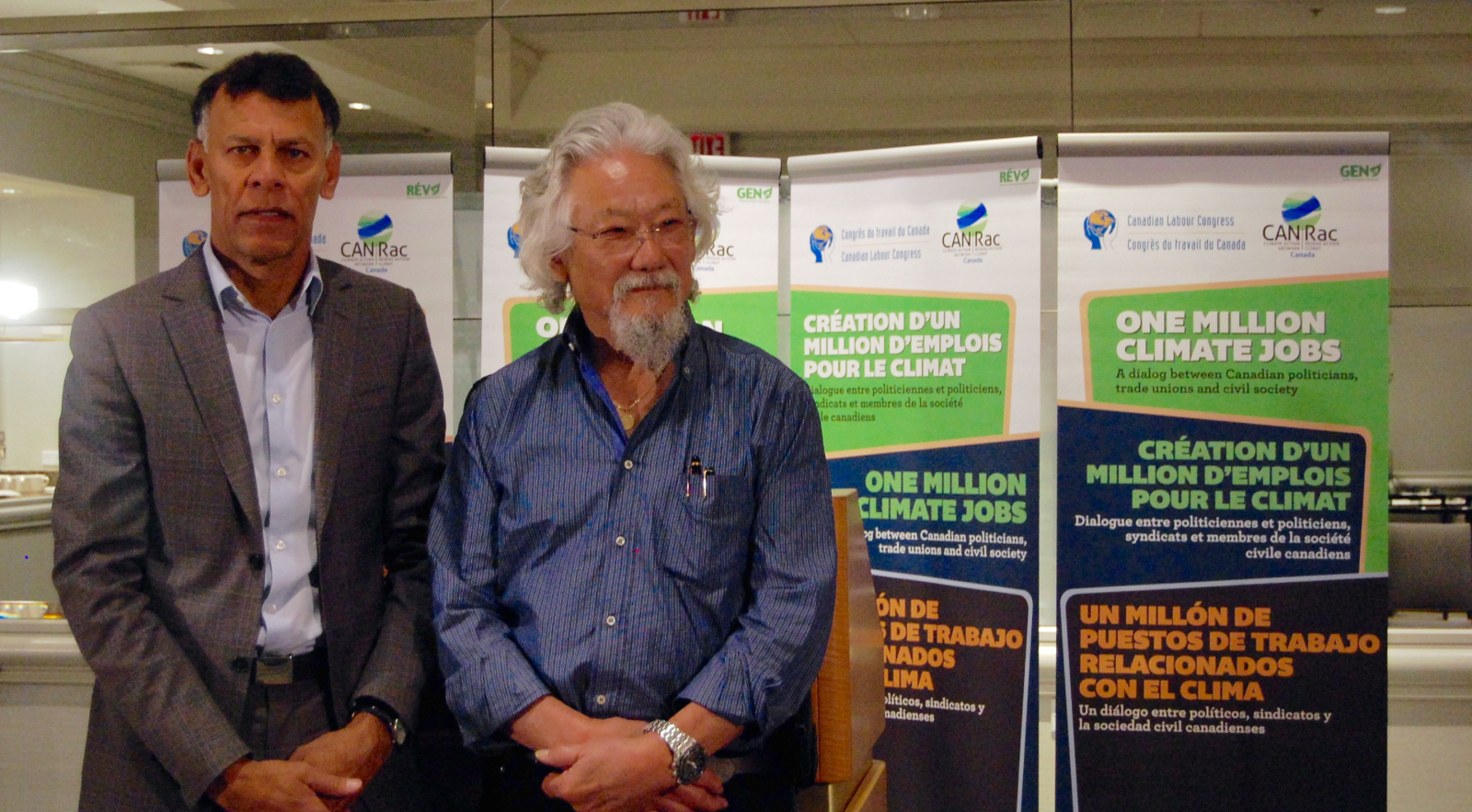 The Liberal government needs to make strategic investments if Canada is going to meet the climate change goals the country announced at the Paris Conference of Parties COP 21.

With that statement, President of Canadian Labour Congress Hassan Yussuff opened a press conference today in Vancouver, joined by renowned environmentalist David Suzuki. “The challenge is that we had 10 years of complete negative activity towards accepting climate change is real,” Suzuki said, before pointing out the first step that needs to be taken to work towards keeping global warming below 1.5°C. “The first thing is changing our mindsets.”

Suzuki and Yussuff laid out the labour congress's “One Million Climate Jobs Plan.” The initiative calls for urgent and “significant industrial transformation toward a new low-to-zero carbon economy,” with the goal of reducing greenhouse gas emissions by one third of the current levels, creating jobs and growing the economy.

In particular, the project seeks to both create a new labour force, and address the hundreds of layoffs in the fossil fuel sector. “Government needs to think about how it will help workers adapt to the changes that are coming by retraining the workers as they’re are losing their jobs and transitioning between industries, and by providing them with decent income,” the CLC president said.

According to Yussuff, there are four important courses of action to be taken over the next five years:

Clean Renewable Energy: Based on calculations by the Center for American Progress, the CLC says that by investing $23.3 billion in public renewable energy such as solar, wind, and geothermal power, Canada could create 290,000 indirect and direct jobs, while reducing GHG emissions between 44 and 110 million tonnes.

Green Buildings: The plan proposes $30 billion in investments to increase the energy efficiency of the country’s residential, commercial and public buildings. By doing so -the organization states- 438,000 jobs would be created, while reducing emissions between 31 and 126 million tonnes.

Public transit: “We need to find a way for people to get to work more efficiently,” Yussuff said. According to his study’s calculations, by investing $17.6 billion in public transit, 223,000 jobs could be created and the improvements would stop between 11 to 20 million tonnes of greenhouse gases from going into the atmosphere.

Higher speed rail transport: The plan proposes taking initial steps to start building higher speed public rail that moves people from Windsor to Quebec City; Edmonton to Calgary; and Vancouver to Seattle. By doing so, 101,600 jobs would be created “while initially reducing GHG emissions between 1 and 5 Mt.”

For David Suzuki, one of the key tactics to put the plan into practice and transition towards a greener economy is making use of the expertise of workers who are or have been linked to pollutant industries. “The important thing is that we keep people working so they can be contributing parts of our society and support their families, but it’s not going to be easy,” he said.

Suzuki pledged to give a chance to Prime Minister Justin Trudeau to make good on his promises. “He’s a politician, of course, so he has to promise that we can do all of this. I don’t know whether we can or not. There are going to have to be some very serious changes, but I think that we should seize every opportunity in making the transition we have to make.”