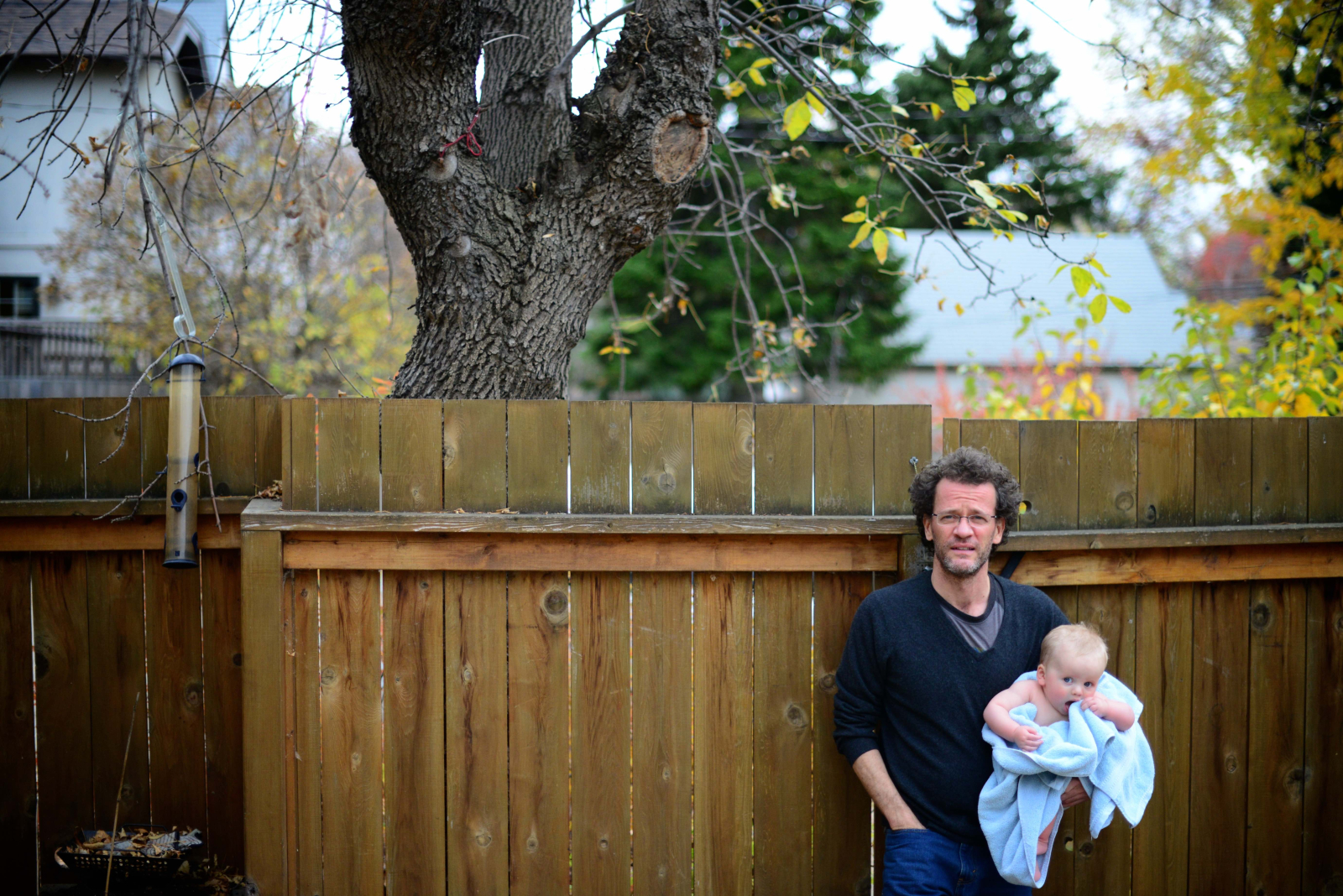 In his latest book, The High Mountains of Portugal, New York Times best-selling author Yann Martel is like a skilled dancer. He leads readers with a strong hand, gliding them through the landscape of his imagination, page by page.

The book achieves what he describes as the goal of fiction: “to go beyond the facts...to a greater subjective truth,” and to reach our “empathetic imagination.”

As in Life of Pi, his 2001 international best-seller, Martel writes about religion — specifically Christianity — in a mythical place and with such deft use of language that the reader is simply transported without noticing why. The High Mountains of Portugal is another tour de force, exemplifying the power of fiction, allegory and bold creativity.

Tomas is the first of several characters in the book who will live in the reader’s mind long after the book itself begins collecting dust. Divided into three sections, (“serendipitously,” said Martel when asked if there was a connection to the Christian trinity), the first is titled “Homeless,” and follows Tomas’s journey, which begins with his long walk backwards through town to his uncle’s house. The backwards walk, unique to literature as far as I am aware, is in defiance to a universe that has betrayed him, taking his wife, child and father all in one week.

Tomas travels from his hometown to his destination: the high mountains of Portugal, a place that doesn’t exist in actuality. It's an imagined land, explained Martel, in an interview from his home in Saskatoon, Sask. He chose Portugal as a setting because he has poignant memories from his travels there, and it sits on the periphery of Europe as Palestine once sat on the periphery of the Roman Empire during the time of Christ.

“The way we name places is the way that we start telling stories about them,” he said. “These are magical mountains, the mountains we climb in the mind.”

Tomas wants to conquer the mountain, an essentially negative quest and symbolic of an atheistic interpretation of faith, explained Martel. As the book progresses, the human relationship with the mountain changes until it becomes a place of contemplativeness and faith.

“Everything in life is achieved through hard work, through aspiring to do something," he told me. "You can’t be passive, especially in matters to do with ultimate reality, with destiny, with fate. Passivity won’t get you anywhere."

Interviewing Martel feels very different from the gliding sensation of poring through his book, akin to chasing after or lagging behind an athletic sprinter moving nimbly from history to science and metaphysical ideas. Martel spends years researching and writing his novels, and knows the material inside and out.

The innocent and tragic Tomas travels in an early iteration of a Renault, he explained. The journey is bumpy, both literally and figuratively — the motor is loud; the road perilous.

“Human life is no more than this: an attempt to feel at home while racing toward oblivion,” Tomas often thinks aloud during his travels.

For once the character reaches his destination, tragedy strikes and exacerbates his sense of loneliness and sorrow. He is struck by the lack of effect this great sadness creates: “surely the fields will notice; they will rise, dust themselves, and come closer to take a concerned look. The road will curl up like a snake and make sad pronouncements. The sun will darken with desolation. Gravity itself will be upset and objects will float in existential hesitation. But no.”

A distinct focus on Christianity

Martel characterizes his focus on Christ’s story as "dispassionate." He chose Christianity, he explained, because in it, God is "incarnate as a human being, to the extent of not only suffering but actually dying, which is unparalleled in religions."

The life of Jesus resembles all our lives, he added, in the sense that all are born, try their best, and then are then crucified at the end when their time has come. "We are killed off by life,” he said simply.

Like many people in the secular mainstream, Martel used to “despise religion,” and still “hates the Catholic church for its homophobia, its sexism, the deep sexism (that is) truly offensive, (and) its paternalism.” He now however, has come to respect some aspects of it:

“I see all these religions as metaphors of the same mystery that we cannot fully grasp…I do choose to believe that all of this material reality, underpinning it, there is some greater meaning," he explained.

In writing this book, Martel researched at length. He not only visited a car museum in England, viewed two autopsies in Saskatoon and travelled the roads his protagonists travel, but also read books about chimpanzees, every Agatha Christie novel from 1920 to 1938, and read and re-read Paul’s letters, many Christian texts and the Gospels with a particular focus on The Gospel of Mark.

The Gospels, told through parable, are truncated stories, manifested in this form as a result of oral storytelling. The Apostle Paul was the first to write down the narrative of Christ’s story, more than 10 years after his death, but before then, it was told by word of mouth, said Martel. Those parables, like The High Mountains of Portugal, require unpacking, just like a suitcase.

Tragedy travels by way of suitcase, nearly 40 years later, into the second part of the book, “Homeward.” It arrives with one of two characters named Maria, who visit a pathologist, Eusebio Lozora. The first Maria is Eusebio's talkative, clever and dead wife who philosophizes while her adoring husband listens, fascinated by her strikingly unusual ideas. Among them, she compares English author Agatha Christie to Jesus:

“The only modern genre that plays on the same high moral register as the Gospels is the lowly-regarded murder mystery. If we set the murder mystery of Agatha Christie atop the Gospels and shine a light through, we see correspondence and congruence, agreement and equivalence... (Agatha Christie) this new apostle answers the same questions Jesus answered: 'What are we to do with death?'”

The second Maria arrives at Eusebio's door carrying her dead husband inside a suitcase. He died of grief and she has come to the pathologist to see what is inside his body. Eusebio knows well that “every dead body is a book with a story to tell, each organ a chapter, the chapters united by a common narrative,” and the autopsy is a evocative scene of magical realism, the only true, “in a technical sense, magical realism in the book,” said Martel.

“There is never any pure reproduction of reality because reality is just what it is,” he explained. “To my mind, fiction — any fiction — even the most hyper realistic, working class kind of novel, is magical realism in the sense that any writing is a selection of reality. You are already altering it.

The central relationship in the third section, “Home,” is between a man, Peter and an ape, Odo. An ape also appears as a replacement for Jesus on a church’s altar cross, a bold image to put in any book. Even Martel describes its meaning as ambiguous:

“It could be a denigration of Jesus, but … just as well, it could be an elevation of all of creation.”

Apes and humans share more than 97 per cent of their genetic makeup, and Martel wondered why religions don’t include animals in heaven. It seems far to glean that he means not to demote Jesus or humans, but rather to elevate other species.

Animals are integral to his stories because they are full of mystery. It's a concept most of us understand, he said, having stared wonderingly at, or into the eyes of our domesticated animals. To Martel, they also represent a “vestige of old religion." If you think about it, he explained, beaten dogs still love their masters unconditionally, as we "beat our gods," who also love us unconditionally:

"Gods are full of mystery so is an animal," he summarized.

For Peter, whose life is disrupted by sorrow after his wife’s death, Odo brings peace. Peter leaves his cushy existence as a senator in Ottawa to move to a small town in Portugal where Maria-with-the-suitcase lived with her husband and son some 50 years before. But he doesn't go alone — he moves there with Odo, and together, they live in a house on the outskirts of town with no electricity and no telephone. Their days are spent walking the high steppes (high mountains) and wandering into town for coffee.

In this section, the story of faith deepens.

“The main impulse of religion, I think, the main thing it asks you to do, is to let go, to stop judging, to stop thinking you know better," Martel explained. "There is a bigger mind out there, there is a bigger plan.

"You are just a small, ephemeral blip so don’t try to understand, don’t be stupid, don’t be cruel, be kind and otherwise just let go. And in letting go, I think the direct consequence is a pulse of joy.”

An intersection of religion and art

Martel believes that both religion and art begin with a discomfort with the universe and disquiet with suffering. Artists describe this condition, whereas religion goes beyond to prescribe and make meaning of suffering. Martel, admittedly, writes his books to “understand something.” In this case he seeks to grapple with questions of loneliness, suffering and the role of faith.

It is in some ways a continuation of his exploration that began with Life of Pi where ground waters symbolically interconnected. In this book, Peter’s contemplative life and his faith come from Odo and the mountain.

For Peter, “the members of his own species now bring on a feeling of weariness in him. They are too noisy, too fractious, too arrogant, too unreliable.” And so, he moved “down to Odo’s lower status (and)…learned to unshackle himself from the race of time and contemplate time itself.”

In the last twirl of this wonderful dance, Martel imparts timeless, mythical wonder with another animal, the extinct Iberian rhinoceros. Peter and Odo see it from atop a boulder in a quiet middle-of-nowhere landscape.

"I wanted a last intrusion of the marvellous," said the author of why he chose to insert such an animal at the end of the story. "I was thinking that by this time people would be getting used to the chimpanzee, especially in part three because it is a real live one.” The last spin is truly a pulse of joy for readers.

Martel is on tour with The High Mountains of Portugal (published by Knopf Canada), and will be speaking at the Vancouver Public Library on Wed. March 16 at 7:30 p.m. He may already know his next book’s subject, he said, but until he has some time to think in his tiny studio behind his home, nothing is laid in stone.