Canada and U.S. aim to cut oil and gas methane pollution by nearly half by 2025 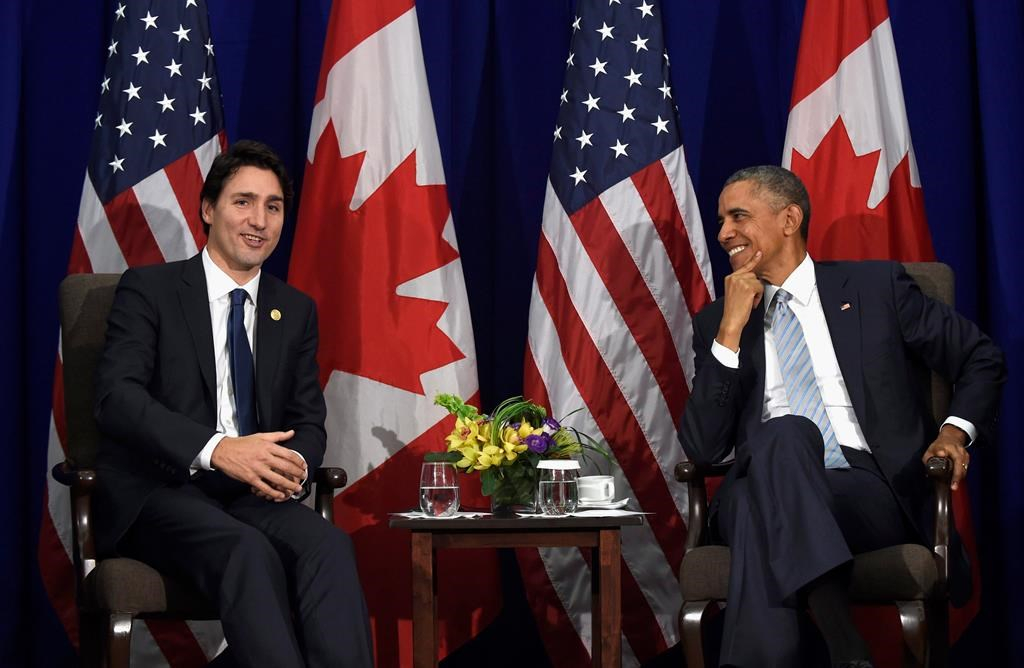 Prime Minister Justin Trudeau and U.S. President Barack Obama agreed to set new caps on methane pollution from the oil and gas sector as part of their joint effort to fight climate change, the two leaders announced on Thursday.

Both governments agreed to introduce new regulations with the goal of reducing heat-trapping methane emissions from oil and gas companies between 40 and 45 per cent below 2012 levels by 2025, a target widely applauded by environmental organizations across the country:

"We are thrilled to see the prime minister announce a national methane reduction target for the oil and gas sector," said Chris Severson-Baker, Alberta director of the Pembina Institute, in a news statement. "This announcement demonstrates the federal government’s willingness to coordinate provincial and territorial action toward a nation-wide methane reduction goal for Canada's oil and gas sector by 2017."

According to the bilateral agreement, Environment and Climate Change Canada is scheduled to publish the first phase of new climate regulations in 2017, while both countries work with international partners to introduce similar policies, and sign the COP21 Paris Agreement “as soon as feasible.”

When implemented, these commitments will represent a "tangible step forward" on emissions reduction in Canada, Severson-Baker, added, building on Alberta's November 2015 methane reduction commitment, and last week's commitment from B.C. Premier Christy Clark to align her efforts with Alberta.

Merran Smith, director of Clean Energy Canada, also greeted the announcement warmly, but said both Canada and the U.S. have a long way to go before truly seizing the opportunity of clean energy co-operation. For now however, the climate agreement contains "two good steps": first, the U.S. and Canada will study and implement ways to bring more renewable power onto the grid, and second, they have committed to developing long-term, low-carbon strategies in 2016.

“It’s great to see clean energy get priority treatment at a summit of leaders, but it shouldn’t be a surprise," Smith explained. "Clean energy is big business, with well over $50 billion invested in the U.S. alone last year.

“Canada’s clean electricity exports to the U.S.—valued at nearly $4 billion in 2014—could triple as the U.S. moves to curb its use of coal under President Obama’s Clean Power Plan. Working with the U.S. on transmission infrastructure and smarter grids would help realize Canada’s clean export potential."

The White House website released the full text of the U.S.-Canada Joint Statement on Climate, Energy, and Arctic Leadership on Thursday, setting priorities for both Environment and Climate Change Canada, and the U.S. Environmental Protection Agency. Below, an excerpt:

Building on a history of working together to reduce air emissions, Canada and the U.S., commit to take action to reduce methane emissions from the oil and gas sector, the world’s largest industrial methane source, in support of achieving our respective international climate change commitments. To set us on an ambitious and achievable path, the leaders commit to reduce methane emissions by 40-45 percent below 2012 levels by 2025 from the oil and gas sector, and explore new opportunities for additional methane reductions. The leaders also invite other countries to join the target or develop their own methane reduction goal. To achieve this target, both countries commit to:

- The U.S. Environmental Protection Agency (EPA) will begin developing regulations for methane emissions from existing oil and gas sources immediately and will move as expeditiously as possible to complete this process. Next month, EPA will start a formal process to require companies operating existing methane emissions sources to provide information to assist in development of comprehensive standards to decrease methane emissions.

Both Canada and the U.S. affirm their commitment to reduce use and emissions of hydrofluorocarbons (HFCs) using their respective domestic frameworks and will propose new actions in 2016. Canada and the U.S. are both demonstrating leadership by updating their public procurement processes to transition away from high global warming potential HFCs, whenever feasible, through government purchase of more sustainable and greener equipment and products.

The agreement also elaborated on collaboration for clean energy projects:

Building on the strong and ongoing efforts by energy ministers under institutional arrangements such as the Canada-U.S. bilateral framework on energy cooperation, the North American Energy Ministers’ recent understanding on Climate Change and Energy Cooperation, Mission Innovation, the Clean Energy Ministerial, and the Regulatory Cooperation Council, the leaders reaffirm their commitment to working together to strengthen North American energy security, phase out fossil fuel subsidies, accelerate clean energy development to address climate change and to foster sustainable energy development and economic growth. Specifically, the leaders pledge to enhance efforts in the following areas:

Lastly, the statement emphasized embracing "opportunities and to confront the challenges in the changing Arctic, with Indigenous and Northern partnerships, and responsible, science-based leadership" and called on Arctic nations and those with Arctic interests to embrace a new future:


Conserving Arctic biodiversity through science-based decision making.Canada and the U.S. re-affirm our national goals of protecting at least 17% of land areas and 10% of marine areas by 2020. We will take concrete steps to achieve and substantially surpass these national goals in the coming years. Specifically, we will work directly with Indigenous partners, state, territorial and provincial governments to establish this year a new, ambitious conservation goal for the Arctic based on the best available climate science and knowledge, Indigenous and non-Indigenous alike. We will also play a leadership role in engaging all Arctic nations to develop a pan-Arctic marine protection area network.

Incorporating Indigenous science and traditional knowledge into decision-making. Canada and the U.S. are committed to collaborating with Indigenous and Arctic governments, leaders, and communities to more broadly and respectfully include Indigenous science and traditional knowledge into decision making, including in environmental assessments, resource management, and advancing our understanding of climate change and how best to manage its effects.

Building a sustainable Arctic economy. We confirm that for commercial activities in the Arctic - including shipping, fishing, and oil and gas exploration and development - we will set a world-class standard by basing development decisions and operations on scientific evidence. Further, commercial activities will occur only when the highest safety and environmental standards are met, including national and global climate and environmental goals, and Indigenous rights and agreements. Canada and the U.S. will work to develop this year a shared and science-based standard for considering the life-cycle impacts of commercial activities in the Arctic.

Supporting strong Arctic communities. We commit to defining new approaches and exchanging best practices to strengthen the resilience of Arctic communities and continuing to support the well-being of Arctic residents, in particular respecting the rights and territory of Indigenous peoples. All Indigenous Peoples in the Arctic are vital to strengthening and supporting U.S. and Canadian sovereignty claims. We commit to working in partnership to implement land claims agreements to realize the social, cultural and economic potential of all Indigenous and Northern communities. With partners, we will develop and share a plan and timeline for deploying innovative renewable energy and efficiency alternatives to diesel and advance community climate change adaptation. We will do this through closer coordination among Indigenous, state, provincial, and territorial governments and the development of innovative options for housing and infrastructure. We also commit to greater action to address the serious challenges of mental wellness, education, Indigenous language, and skill development, particularly among Indigenous youth.

In moving forward, we welcome the upcoming White House Arctic Science Ministerial this fall, which will bring together Science Ministers from nations with Arctic interests, and the twentieth anniversary of the Ottawa Declaration, which established the Arctic Council in 1996. Canada and the U.S. commit to a regular bilateral dialogue to ensure progress towards the realization of these objectives, to continuing their strong cooperation on scientific work and research, and to advancing our shared Arctic leadership model through the Arctic Council.

A moment of firsts, as Trudeau arrives in the U.S. today