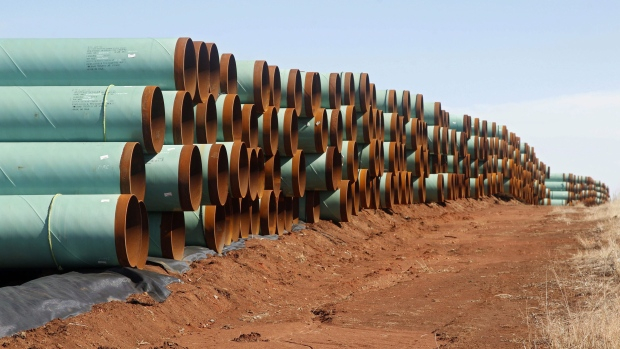 Miles of pipe for pipeline are stacked in a field near Ripley, Oklahoma. in this Feb. 1, 2012 file photo by Sue Ogrocki / The Canadian Press
Previous story

DES MOINES, Iowa — The last state permit needed for a pipeline that will carry a half-million barrels of crude oil daily from North Dakota to Illinois was approved Thursday by Iowa utilities regulators, who also gave the Texas-based company authority to use eminent domain for land that property owners are unwilling to voluntarily provide.

The Iowa Utilities Board voted unanimously to approve a hazardous pipeline permit for the so-called Bakken pipeline, 346 miles of which will cross through 18 Iowa counties and 1,300 parcels of land.

"We weighed the public benefits of the proposed hazardous liquid pipeline project against the public and private costs and other detriments as established by the evidence on the record," board member Elizabeth Jacobs said. "Together we weighed all the issues presented by the parties and found the issues of safety, economic benefits, environmental factors and landowners' rights to merit the most significant weight in reaching our decision."

The board had to decide whether the pipeline met the requirements of Iowa law, which authorizes approval of a permit only if it "will promote the public convenience and necessity."

Individual landowners and a coalition of environmental and property rights groups spoke out against the project, which drew 3,700 letters of protest to the board, voicing concerns about pipeline leaks that could harm farmland, rivers and streams. Farmers also opposed the pipeline, complaining it will decrease land values, disrupt productivity of farmland and damage timber areas.

Owners of 296 parcels of land have refused to sign easements allowing the pipe to go through their property. The board's approval means Dakota Access may now proceed with condemnation proceedings using eminent domain authority to force them to co-operate.

Opponents said they plan to appeal.

"While the ruling is certainly a setback and disappointing landowners will assess how to move forward on appeal and they are going through that process," said John Murray, a Storm Lake attorney who represents the Northwest Iowa Landowners Association. "We need to read the entire ruling to fully inform ourselves."

Lawsuits are expected to challenge whether the board has the authority to grant eminent domain authority to a company building a pipeline for profit. Such authority is frequently given to publicly owned utilities, but not often to for-profit companies. Dakota Access is owned by Phillips 66 and Energy Transfer Partners, both publicly traded companies.

In addition to a lawsuit challenging the overall project, landowners who have refused to sign easements also may fight land condemnation proceedings at the county level and appeal their individual cases to district court.

Dakota Access plans to have the pipeline completed and in service by the end of this year. It said the pipeline will be significantly safer than transporting oil by truck or railroad and that construction will create $1 billion in economic benefit to Iowa, including creating thousands of jobs.

The project must still receive approval from the Iowa Department of Natural Resources and The U.S. Army Corps of Engineers. Both organizations said they are nearing completion of their reviews.