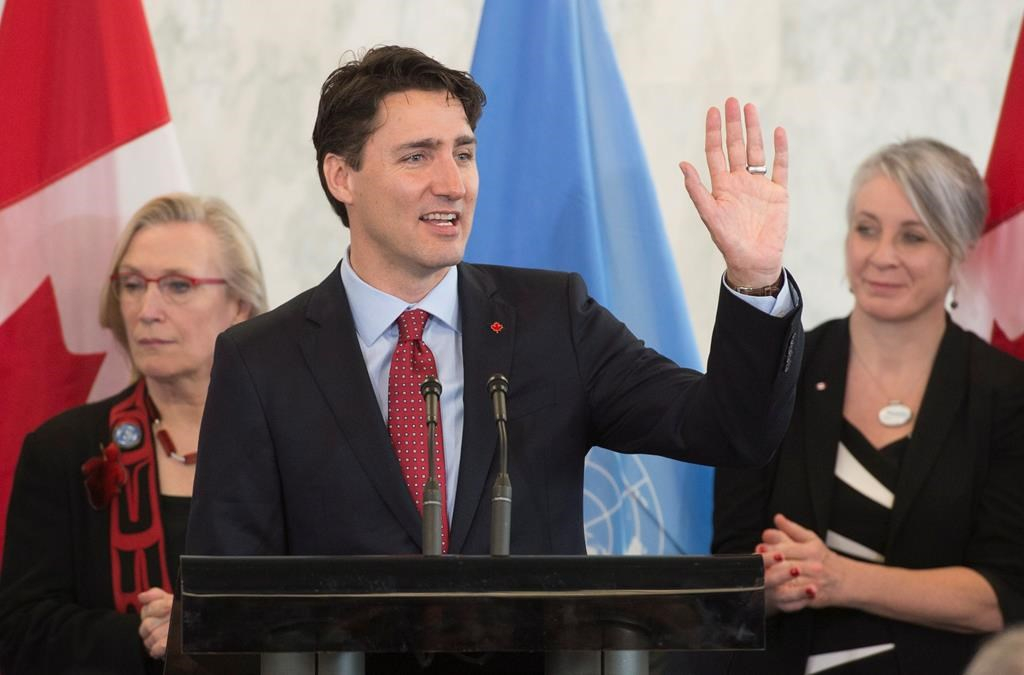 Justin Trudeau told large New York audiences Wednesday that he looks forward to someday being able to call himself a feminist without having it wind up in news headlines.

The prime minister told a packed United Nations convention hall that he foresees a generational shift, as more parents raise their kids to embrace the term as a endorsement of basic equality.

"I’m going to keep saying, loud and clearly, that I am a feminist. Until it is met with a shrug," he told the UN women’s conference Wednesday, in an auditorium filled with a near−total female audience.

"It shouldn’t be something that creates a reaction. It’s simply saying that I believe in the equality of men and women and that we still have an awful lot of work to do to get there. That’s like saying the sky is blue and the grass is green."

The event was one of several on a day where Trudeau announced to a photo−snapping crowd in the UN lobby that Canada was pursuing a seat on the security council in 2020; met with business leaders; and was honoured at an evening gala by the women’s group Catalyst for having formed a gender−parity cabinet.

He delivered a similar message to the evening crowd — an audience that featured high−power heads of famous companies like McDonald’s, Campbell Soup, Carnival and Shell.

He said everyone there had enjoyed some privilege, to wind up at a gala in a glitzy ballroom at the Waldorf Astoria hotel, and he urged them to use it to help others rise: "We must use that privilege... We need to remember to always challenge the status quo, even though it may be what got us here tonight."

Trudeau explained to both crowds that long before he’d uttered the now−famous phrase, "Because it’s 2015," his team worked in 2014, 2013, and 2012 to recruit talented female candidates.

He said that process was complicated by the fact that women were more likely to refuse career opportunities — because they were busy caring for children and elderly parents.

Trudeau suggested policies that encourage a work−life balance. He offered one potential example of parental leave that would only be available to men. A PMO official explained that the government isn’t actually considering this, but is looking at family−friendly policies including changes in the House of Commons rules for federal employees.

The moderator at the UN auditorium event, New York ABC news anchor Sade Baderinwa, told him: "With all the nods, and all the clapping, I think you’re well−liked in this room, prime minister."

He suggested in both events that companies might be moved to better gender balance just by making them address how many women are in their work forces and their boards.

"One of the things that has shown effectiveness is just making people report explicitly on the gender balance within their organization, within their boards at the highest levels," Trudeau said.

The Harper government’s last budget in 2015 included a proposal to require companies to either put a gender equality policy in place or explain publicly why they don’t have one.

Trudeau stressed in both events that Canada still has a long way to go. He cited the male−female earnings gap as one example and violence against women — especially aboriginal women — as a particularly egregious problem.

He described feminism as a generational trend.

Asked at the UN event how he started using the term, he referred to his parents. He said his mom was a feminist. He said the term didn’t apply to his dad, despite having been a human−rights advocate who introduced the modern Canadian Constitution: "He was a great guy — but I don’t think he’d ever be able to be qualified as a feminist."

He said he and his wife are teaching their kids — two boys and a girl — to embrace feminism. And he predicted that more and more people would do so over time, with young people leading the way.

"We should be standing up for women’s rights and trying to create more equal societies? Like, duh."