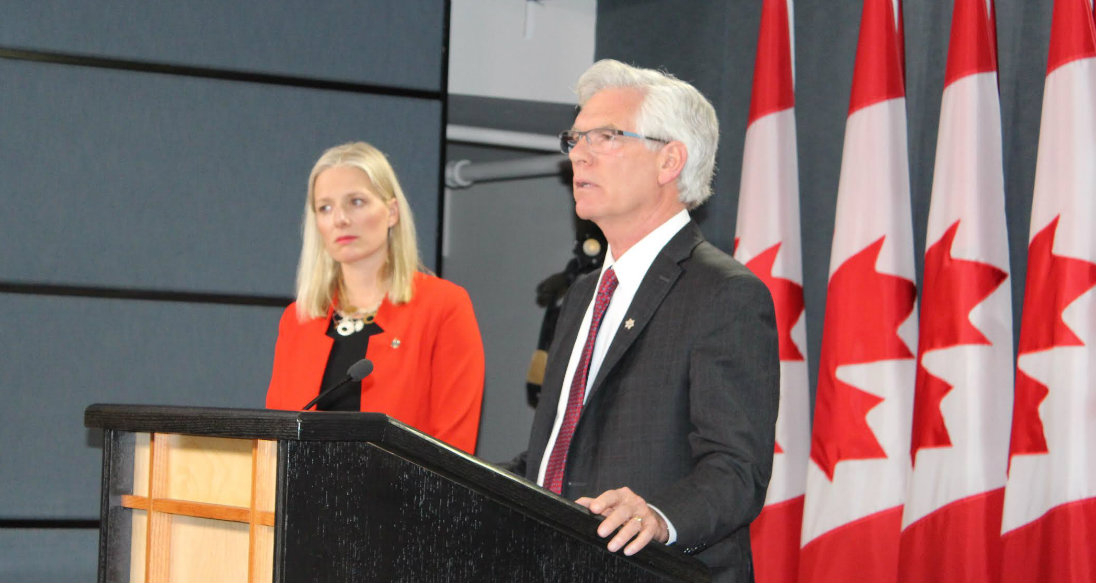 Now is not the time to phase out fossil fuel subsidies, Natural Resources Minister Jim Carr said Wednesday, despite what a Liberal cabinet colleague is billing as the greenest federal budget ever.

But a campaign promise to "phase out subsidies to the fossil fuel industry over the medium-term" did not make the cut in the first Liberal budget. In fact, the government locked in one recent liquefied natural gas subsidy until 2025.

Carr emerged from a caucus meeting Wednesday to say now is "not the moment" to start ramping back government subsidies for an oil and gas sector hammered by a global glut and price decline.

"You know, there are all kinds of issues that are important in the oil and gas industry right now and the government wants to express its support for the industry in a variety of ways — and in particular, as you will notice, people who are suffering because of the low commodity price," said Carr.

"Those are the priorities the government has chosen."

Prime Minister Justin Trudeau has made combatting climate change a central motif of his government and expectations continue to run extremely high in the environmental community.

However, with a budgetary deficit of almost $30 billion in the coming fiscal year, Finance Minister Bill Morneau's first budget elected to ramp up environmental spending relatively slowly, compared to the lofty Liberal rhetoric.

A large suite of environmental measures under the rubric of "clean growth economy" will see $111 million in new funding this year, ramping up to almost $1.5 billion in 2016-17.

"There has never been a budget that is greener," Environment Minister Catherine McKenna flatly asserted in an interview Wednesday.

"You can't just look at one piece of this budget and say 'that's the climate piece.' This is a whole-of-government approach where we're sending signals that, across the board, we're going to be looking at ways to reduce emissions and move in a much more sustainable way to grow our economy."

Environmental groups largely gave the budget a passing grade — with the persistent caveat that it's considered only a starting point for future action.

The David Suzuki Foundation, for example, described the Liberal emphasis on linking the economy and the environmental as "refreshing."

"At the same time, we're concerned that the level of investment doesn't match the urgency of the environmental challenges Canada faces," said CEO Peter Robinson.

The federal government committed earlier this month in Vancouver to a half-year negotiation with the provinces and territories over climate policies, including the contentious issue of carbon pricing. That's bought some time.

In the meantime, the feds are beginning to finance clean technology, including through a long-overdue accelerated capital cost allowance for clean technology firms to help them get financing.

"I suspect that's why most of the NGOs are happy, because they had been pushing for that stuff for years and it was just sitting there," environmental economist Dave Sawyer said in an interview.

Research and development assistance for the clean tech sector is also welcome, he said, as it fosters innovation and employment.

Sawyer noted that the auditor general reported in 2012 that Conservatives spent $9 billion on climate initiatives between 2006 and 2010, with little to show for it.

The Liberals will face similar scrutiny, which is how McKenna justifies the cautious environmental spending this coming year.

"We need to take a thoughtful approach to this and figure out what projects make sense and what direction we want to go," she said.

She said the budget "confirms and entrenches" the Canadian Environmental Assessment Agency for another four years, locking in controversial Conservative changes the Liberals bitterly opposed when they were introduced as part of a sweeping omnibus bill in 2012.

The budget also confirmed it will leave in place a Conservative tax break for liquified natural gas producers that runs through 2024.

"But I'm believing it now in spite of the evidence to the contrary in this budget ... They just committed to fossil fuel subsidies until 2025."