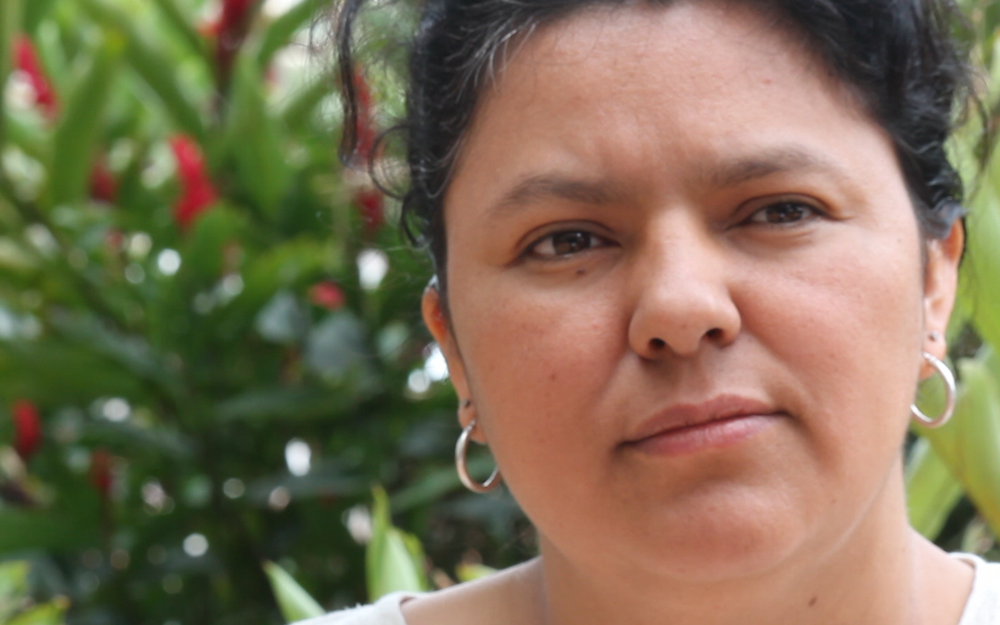 Prime Minister Trudeau's commitment to stand up for women's rights is put to the test by the assassination of Honduran environmentalist, Berta Cáceres.

Earlier this month in New York, Prime Minister Justin Trudeau called himself a feminist and declared in front of an international audience his commitment to stand up for women’s rights.

His first real test is how Canada will respond to the March 3rd assassination of prominent Honduran feminist and environmental defender Berta Cáceres. Despite more than three weeks of global outcry over her death, the Canadian government has chosen to say very little beyond a very short and meek statement issued by Canada’s Ambassador to Honduras.

We can, and must do better. Now is the time for Canada to show concrete global leadership on women’s rights. Calling for the protection of women at the front lines of struggle is crucial to the bigger picture of ensuring women’s rights.

We saw this first-hand in 2012 when we accompanied Nobel peace laureates on a fact-finding mission to Mexico, Guatemala and Honduras. We met hundreds of women, including Berta Cáceres, who were daring to stand up against violence, racism, and unwanted development projects in their communities.

We also heard about many more women who couldn’t be with us, including, as just one example, the terrible story told to us by two teenage girls of their mothers, who had ‘been disappeared’ for speaking up about a forest in their community that stood in the way of an industrial project. Women speaking out are seen as threats to big business and the status quo, and they are often killed. Many we met were organizing, marching and calling for ni una más! – not one more.

When we listened to Berta Cáceres, leader of the Civic Council of Popular and Indigenous Organizations of Honduras (COPINH), we were struck by the power in her voice and her analysis of how unchecked pursuit of foreign investment is stripping her, and her people—the Lenca—of their land and identity in Honduras.

As an environmental defender in Honduras, Berta’s work put her up against strong, corporate interests protected sometimes ruthlessly by the state. Honduras is considered to be the most dangerous country, per capita, to be an environmental activist.

Since the coup d’etat in 2009, an estimated 100 environmental defenders have been killed, and the United Nations Special Rapporteur on Human Rights Defenders says that women activists are considered to be particularly at risk. Berta Cáceres was no stranger to threats and violence and she continued to speak out until armed men gunned her down in her home.

Our voice in Honduras matters. Honduras is a burgeoning market for Canadian investment, which our government has vigorously promoted. After the 2009 coup d’etat, Canada signed a free-trade agreement with Honduras and pushed the Honduran government to adopt a new mining law that would benefit Canadian investors.

The law sidesteps the rights of Indigenous communities, so Berta’s death is an important reminder that we have a responsibility to ensure that Canadian investment is not synonymous with human rights abuses.

In the wake of Berta’s murder the cry of ni una más can be heard in all corners of the globe. Environmentalists, labour and women’s groups are calling for justice which can only come through a thorough, impartial and international investigation. In Canada, sixty organizations have signed and sent a call for action to the Canadian government asking for such an investigation and the protection of Berta’s family and COPINH members. We echo this call.

As Canadian environmental activists, we have worked for the water and the the land against the expansion of destructive industries within Ontario’s Niagara Escarpment and the Alberta tar sands.

Not unlike the women of Central America, we have organized, marched and called for our government to halt the exploitation of the planet for capitalist gains. But if our sisters can stand up for what is right while facing threats and actual assassinations, we surely cannot sit idly by and allow this business to carry on, protected by ruthless international actors operating with complete impunity.

We sincerely appreciate Prime Minister Trudeau’s attempts to build a name for Canada on the women’s rights stage. To do this he must use Canada’s political and economic weight to push for serious action for the protection of the women risking their lives to protect our Earth.

Canada’s significant economic investments in Honduras and around the world must prioritize lives and justice over profit margins. That starts with ensuring that Canada’s industries uphold the rights of Indigenous people to free, prior and informed consent in accordance with international laws.

On March 6, Berta Cáceres was not buried, but was planted, in her community of La Esperanza, Honduras. From the depths of the Earth, as Berta’s colleagues say, she will nourish our hope for a world where our land is respected and Indigenous peoples flourish. As Canadians, we call on our country to demand justice for Berta and use its influence to build a safe, secure future for women defenders worldwide.

Berta Cáceres, In Her Own Words is based on a 2012 interview with the Honduran environmental activist and co-founder of the Council of Indigenous People’s Organizations of Honduras (COPINH).