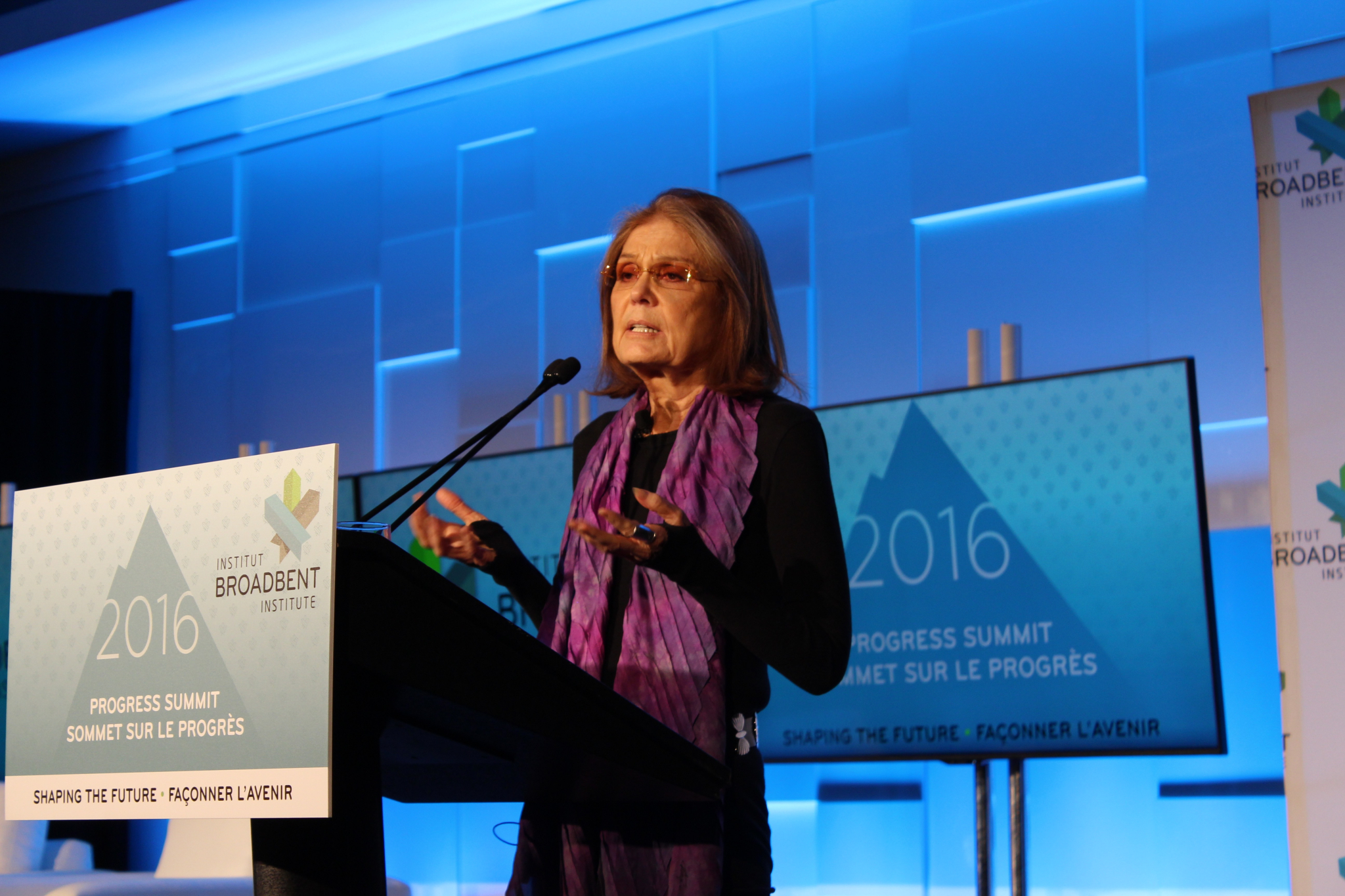 Feminist icon Gloria Steinem said she was glad to be speaking in a "Trump-free zone." Photo by Mike De Souza
Previous story
Next story

Gloria Steinhem told a packed downtown Ottawa hotel ballroom at the annual Progress Summit today that Donald Trump is a racist, but she expressed hope that Americans would choose to reject him at the polls.

“Don’t worry, we’re not going to elect him," she said today at the Broadbent Institute's annual conference. "You’re not going to be faced with doubling your (Canadian) population because we’ll all flee here."

Steinem drew laughter from the friendly crowd as she joked about the Republican presidential candidate and businessman, explaining that she was happy to be in a “Trump-free” zone.

Trump aside, activists from all walks of life must recognize the issues that bring them together to achieve change, the iconic American author and feminist, also said.

Instead of operating in silos, she said, many different movements defending rights, environmental issues, and other causes need to organize themselves in a circle instead of a pyramid.

“I think that we have long been kind of cursed with the more European idea of hierarchy, when in fact, had we kept the model of organizing before Europeans showed up, we would have understood that it was a circle,” Steinem said. “What we struggle for is that we are, as human beings, linked, not ranked and that we are linked to the environment. And I think that once we have it in our minds, we can never, never unremember it.”

Steinem noted that at a time when governments and the media are talking about the need for economic stimulus, she said they may be neglecting the potential benefits that would come from ensuring equal pay for women and men that do the same jobs.

“For women of all races and ethnicities and groups to be paid the same as a white guy who is down the same job or comparable job would be the biggest economic stimulus we could possibly have,” she said. “In the States it would put $200 billion more into the economy. And those women are not going to put that money into a Swiss bank account. No. they are going to spend it.”

She added that pay equity was also essential for households with single mothers with children. She said these families are most likely to depend on social services.

“So equal pay would diminish the needs for social services. it is a win-win,” she said.

“When people are asked why they are for him in public opinion polls, they say it’s because he’s a successful businessman,” she said.

"Somebody intelligently figured out that if he had simply invested at market rate, the $200 million bucks he inherited from his father, he would be richer than now. But he has gone bankrupt… stuck other people with his debt. He is not a successful businessman, he is a con man.

"He is a protest candidate," she said.