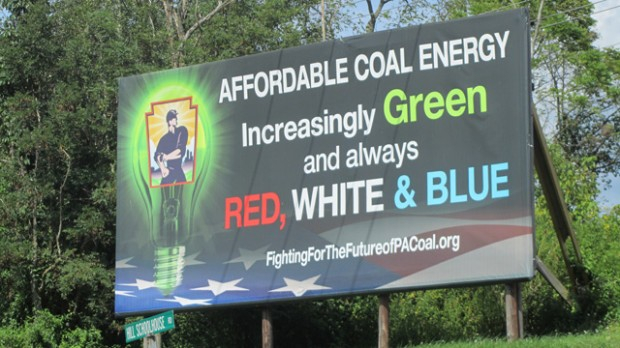 In the early years of DeSmog’s research into environmental propaganda, I thought of industry PR campaigns like “junk science,” “clean coal,” and “ethical oil” as misinformation strategies designed to dupe the public about the real issues.

Although there is obvious truth to that view, I now understand that propaganda is far more complex and problematic than lying about the facts. Certainly propaganda is designed to look like facts that are true and right, but not in a way we might think. What’s more, the consequences are far worse than most people consuming and even producing it realize.

Much of my new understanding comes from conversations with Jason Stanley, an American philosopher and professor at Yale University and author of an important new book How Propaganda Works. According to Jason Stanley, the danger for a democracy “raided by propaganda” is the possibility that the vocabulary of liberal democracy is being used to mask an undemocratic reality.

In this rich and thoughtful book Stanley defines political propaganda as “the employment of a political ideal against itself.” DeSmog stories about groups presenting ideologies or financial interests as objective and scientific evidence are paradigm examples of this type of propaganda.

“Propaganda that is presented as embodying an ideal governing political speech, but in fact runs counter to it, is antidemocratic … because it wears down the possibility of democratic deliberation,” Stanley writes.

It sometimes involves outright lies, but Stanley points to a bigger problem, which is that “sincere, well-meaning people under the grip of flawed ideology unknowingly produce and consume propaganda.”

My worry, alongside Stanley’s, is that when we can’t spot propaganda or don’t understand how it works, its detriment to democracy will grow to a point where it can’t be reversed.

The best example of this dangerous form of propaganda is currently playing out in the race for a leader of the Republican Party in the U.S., with its surprising frontrunner, real-estate tycoon and reality TV star Donald Trump.

In his campaign, Trump has described Latino immigrants as criminals and rapists and proposed to build a wall across theU.S. border to keep Mexicans out of the country. He’s also called for a “total and complete shutdown” of Muslims entering the U.S. as an attempt to crack down on terrorism and believes those already in his country should be registered on a special government database and required to carry special identification cards.

While it may sound like bluster to some, Trump’s efforts to build support by whipping up fear and anger about race and religion is unfortunately working, at least where popularity contests are concerned.

That’s even though people in his own party see him as reckless and dangerous for the country. Trump is now being regularly characterized as a demagogue in mainstream media, with parallels to Joe McCarthy, the Republican senator who is known for stoking anti-communist fears in the 1950s.

Canada isn’t immune to this propaganda-guided campaign strategy. Consider the Conservative-driven debate during last fall’s federal election around whether Muslim women should be allowed to wear the niqab during the citizenship oath. The former Harper government’s “Zero Tolerance for Barbaric Cultural Practices Act” also pandered to fears of immigrants, while claiming to address issues such as forced marriages and honour killings, which many pundits were quick to point out are already illegal under existing laws.

Understanding propaganda is key to stopping its spread

Obviously these examples of propaganda feed into negative stereotypes, but blatant bigotry is only part of the problem.

This style of rhetoric is not as much an attempt to persuade, as it is an act of cultural tribalism: the creation of a team divided against other teams in a manner that shuts down open-minded thinking.

Stanley writes that a democratic society is one that values liberty and political equality. It is a society suffused with a tolerance of difference. It rests on the view that collective reasoning is superior, “that genuine liberty is having one's interests decided by the result of deliberation with peers about the common good.”

These examples of propaganda pose a challenge for liberal democracy because they sabotage joint deliberations of this sort. They are touted as free speech but in fact undermine public reason by excluding certain groups.

Such ad hominem name-calling undermines our ability to question our perspectives, or respectfully consider the perspectives of others, Stanley says. It undermines the inclusive, rational debate at the core of liberal democracy.

“…flawed ideologies rob groups of knowledge of their own mental states by systematically concealing their interests from them,” he says.

Understanding what makes propaganda effective is at the heart of understanding political inaction on issues that scream out for action. Stanley is most worried about demagogic speech, saying it “both exploits and spreads flawed ideologies,” creating barriers to democratic deliberation. “It attempts to unify opinion without attempting to appeal to our rational will at all,” he says.

Stanley describes propaganda as a method to bypass the rational will of others. The consequences are widespread and can be long-lasting. Accumulated over time, propaganda becomes a turn off that discourages citizens from participating in democratic responsibilities, such as voting, the participation level of which is already embarrassingly low in free societies like Canada and the U.S.

The propaganda problem goes way beyond terrorism, impacting the entire world around us. Consider the harm being done to the planet by those who deny climate change is a reality or label Canadian oil as “ethical” and coal from West Virginia as “clean” to justify its aggressive expansion and government subsidies.

According to Stanley, it’s difficult to have a real discussion about the pros and cons of an issue when they’re slapped with these types of spin. He believes assertions like these, where words are misappropriated and meanings twisted, are often less about making substantive claims and more about silencing critics.

In his words, they are “linguistic strategies for stealing the voices of others.” Groups are silenced by attempts to paint them as grossly insincere, which in turn undermine the public’s trust in them. Consider the former Harper government’s labeling of environmentalists who opposed their aggressive oil sands expansion policies as “radical groups” funded by foreign interests trying to block trade and undermine Canada's economy.

When I first met Stanley in Harlem, he used the example of Fox News, which he says is silencing when it describes itself as ‘fair and balanced’ to an audience that is perfectly aware that it is neither. “The effect is to suggest there is no such thing as fair and balanced. There is no possibility of balanced news only propaganda,” Stanley says.

This style of propaganda pollutes the public square with a toxic form of rhetoric that insinuates there are no facts, there is no objectivity and that everyone is trying to manipulate you for their own interests.

Can the battle against propaganda be won?

So when facts are being spun and people mislabeled and it appears that you can’t trust what anyone says, why bother paying attention at all?
American linguist Deborah Tannen puts the problem this way, “when you hear a ruckus outside your house you open the window to see what’s going on. But if you hear a ruckus every night you close the shutters and ignore it.”

Propaganda makes it difficult for citizens to weigh facts honestly and think things through collectively. What’s more, it’s convinced many of us to disengage.

That, is the exact opposite reaction we should have at this time. Instead, we need to ensure the conditions for reasonable conversations about serious problems that impact society are made possible.

Stanley cites a tradition in political philosophy, dating back to Aristotle, called “defending rhetoric.” He argues there is a kind of propaganda that is necessary to help overcome obstacles to realize democratic ideals. That is speech that brings empathy and appeals to emotion, to bring reasonableness back into public discourse. In other words, fighting propaganda with propaganda that elicits empathy can help to reinforce the liberal democratic ideals of autonomy, equality and reason.

“The demand of reasonableness requires those deliberating about policy to take into account the perspective of anyone who may be subjected to those laws,” Stanley writes.

The antidote to demagogic propaganda is what Stanley calls civic rhetoric. It’s an attempt to share the perspectives of a group who have been silenced, or what he describes as “the tool required in the service of repairing the rupture.“

One of the most striking lessons in his book, How Propaganda Works, is a piece of advice on what we can do personally, about the dark art of propaganda.

Stanley writes: “In the face of the complexities we've discussed, perhaps a reasonable way to adhere to ideal deliberative norms, for example, the norm of objectivity, may be to adopt systematic openness to the possibility that one has been unknowingly swayed by bias.”

To me, the best way to fight propaganda is to become savvier about how it manipulates, how it actually works, as Stanley does in his work. It’s not just because we don’t want to become a victim of propaganda, we also don’t want to inadvertently contribute to its dark purpose.

As George Orwell wrote: “One defeats the fanatic precisely by not being a fanatic oneself.”

This story was republished with permission from Desmog Canada