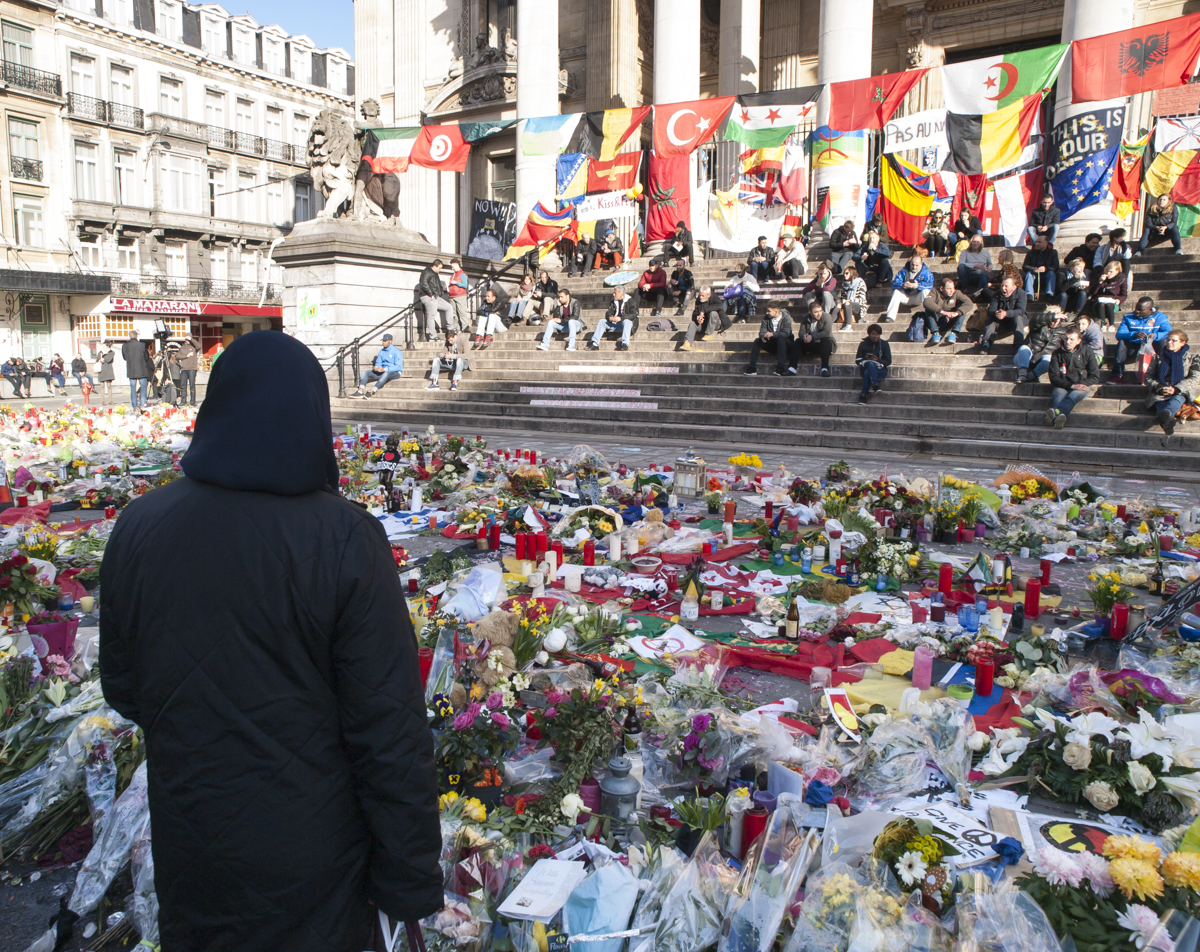 A muslim woman stands in front of the memorial to the bombings in Brussels. Photo by Joshua Hergesheimer
Previous story
Next story

Belgian officials are preparing to reopen the Zaventem airport, damaged two weeks ago in a series of terror attacks that have shaken Brussels, headquarters of the European Union. While security forces work overtime and soldiers patrol the streets, conversations are taking place about what the future will bring for the small European country with a big problem. 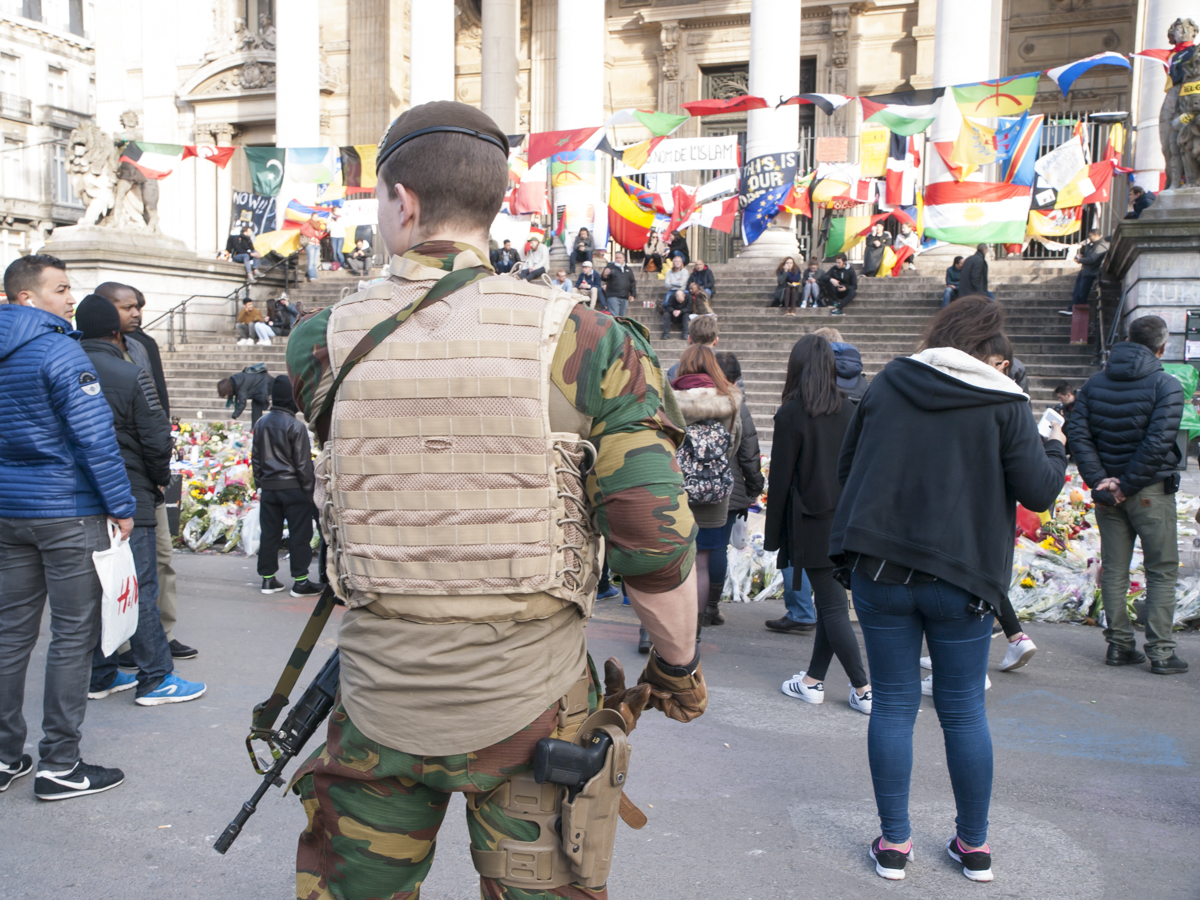 Belgian solider stands guard at the Place de la Bourse in central Brussels, which has become a memorial site to the victims of the March 22 bomb attacks. Photo by Joshua Hergesheimer

At 7:58 a.m. on March 22, 2016, a pair of powerful nail bombs packed in suitcases exploded in the airport, destroying check-in desks, shattering glass and causing carnage. At 9:11a.m., a third bomb exploded, this time on a metro train just outside of Maalbeek subway station, not far from the offices of the European Commission.

The Islamic State of Iraq and the Levant quickly claimed responsibility for the bombings. In total, 32 people died and nearly 300 were injured, making it the deadliest attach in the country’s history. The country is now on the highest alert level.

Brussels is a fashionable, refined city. Trams glide down cobblestone streets past graceful brick buildings, and the sidewalk cafes and bars are packed with smartly-dressed people sipping Chardonnay and nibbling charcuterie. These days, though a sense of normalcy has returned, Brussels still feels like a city on edge. Walk out the doors of Brussels Central train station and you’ll come face-to-face with Belgian soldiers wearing bulletproof vests and brandishing machine guns. They wave off attempts to photograph them.

The soldiers at Place de la Bourse, where a memorial to the bombing victims has sprung up, are more crowd-friendly. Each day the plaza fills with people laying flowers, writing inspirational messages in sidewalk chalk, expressing solidarity with Brussels. News crews from around the world have also gathered, cameras and microphones extended to record the sentiments of passersby. What’s changed, they ask. Are you worried about future attacks? And what now for Belgium?

While the questions flow freely, the answers seem elusive. It’s well-known by now that Belgium has a serious problem with Islamic extremists. The much-maligned Molenbeek neighbourhood, home to large numbers of Middle Eastern and North African migrants, has become a symbol of everything that has supposedly gone wrong with Belgian integration. The Charlie Hebdo gunmen are believed to have connections to Molenbeek, and the Paris attackers of November 13 had links to the area, and one of the alleged perpetrators, Salah Abdelslam, was captured by police after months in hiding there.

The Molenbeek neighborhood is seen by many as a microcosm of the country’s problems writ large. Though Belgium is a small country, with just over 11 million residents, it has the highest proportion of foreign fighters who have travelled to war-torn Iraq and Syria: nearly 520 citizens have left to wage jihad. Closer to home, a radical group calling itself Sharia4Belgium has stoked the fears of those who feel the country is losing the battle against extremists.

The issues involved are complex — terrorism, security, migration, integration — and devising solutions is proving challenging. While security services are occupied with trying to prevent future attacks, a larger set of conversations is taking place between diplomats, policy makers, police and social workers about how to confront radicalization. And at street level, the coffee shops and bars are buzzing with heated debates about the failure of integration in Belgium’s cities, worry about immigration from Muslim-majority countries, and the encroachment of religion into Belgian society.

While right-wing political groups are exploiting the terror attacks to mount an offensive against what they perceive as the ‘Islamification of Europe,’ the vast majority of people are realizing that they can no longer avoid discussions about these uncomfortable issues. While in the past sentiments and resentments about non-integration may have been dismissed as ‘racist’ or ‘xenophobic,’ there is a dawning realization that not having these conversations — in essence, doing nothing — is no longer a viable strategy. But there are no easy answers to these questions, about what can be done to stop the rise of extremism.

In an interconnected Europe, Belgium's problems are not only its own. They are the continent's problems...and solutions are badly needed if the European Union is to provide security for its citizens while ensuring civil liberties are respected.