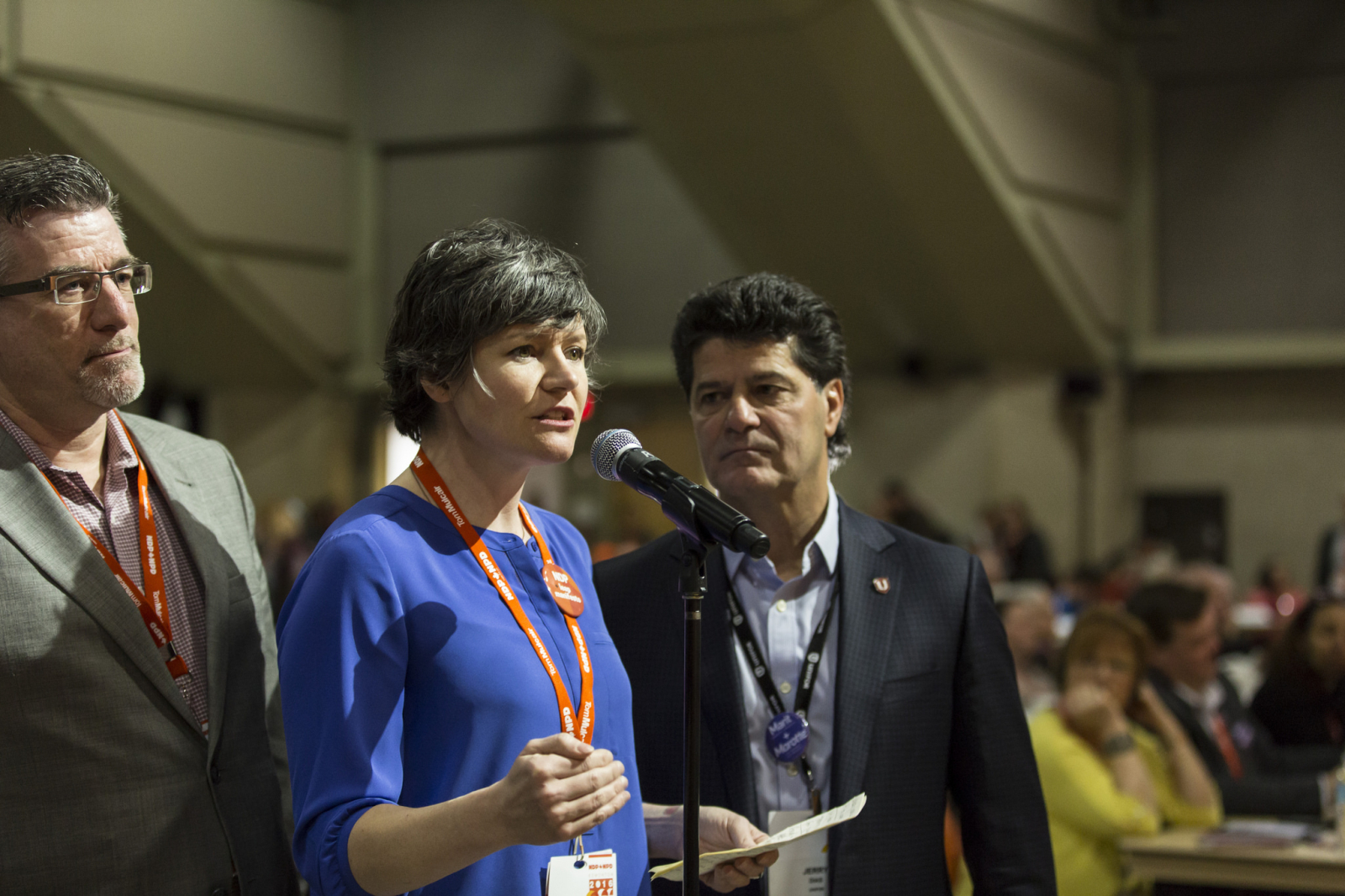 Delegates clashed at the NDP convention in Edmonton about the party's future direction, after a devastating loss of seats in the 2015 election. Two different visions for the NDP came to a head at the Shaw Conference Center: one championing pragmatic, disciplined politics, the other fighting for inspiration and principle.

The votes on Sunday marked a strong desire for change in the party, with delegates choosing to replace Thomas Mulcair and to support discussions of the Leap Manifesto, a bold policy blueprint calling for Canada to transition off fossil fuels toward renewable energy by 2050.

The centrist experiment initiated by late Jack Layton seemed to come crashing down in 2015 with the elections results under Thomas Mulcair, who some argue was more like Canada's Tony Blair, rather than a socialist firebrand. During last year's election, Mulcair tried to present a pragmatic alternative to the Harper’s Conservatives, with promises of balanced budgets, no tax hikes other than a slight bump on corporate taxes, and a sustainable plan for the Alberta’s oil sands. Critics said this gave the Liberals space to shift left and take votes away from progressive voters.

What would CCF-NDP giant, the late Tommy Douglas, think of his party’s division today?

“Tommy must be rolling in his grave,” said John McNamee, a delegate from Ontario, who has been a social democrat for over 60 years. McNamee felt Douglas wouldn’t be happy about the NDP's internal conflict in the pursuit of political power.

In 1983, Douglas took the stage during the 50th anniversary of the Regina Manifesto, which proposed social service programs such as publicly funded universal health care. His message to the audience was simple—he would never choose political power at the cost of NDP principles.

“If I could press a button tonight and bring a million people into this party, and knew those people were coming for some ulterior motive, but they didn’t understand the kind of society we are trying to build, I wouldn’t press the button, because we don’t want those kind of people,” Douglas had said at the time, to loud applause.

During that convention, the NDP was also divided between pragmatic and visionary politics. Alberta NDP leader Grant Notley, and NDP Leader Saskatchewan, Allan Blkeney, asked the federal leader Edward Broadbent to change direction. The federal NDP had sunk in popularity, and lost support of Western Canadians.

Multiple delegates interviewed by the National Observer said the Leap Manifesto reminded them of the CCF’s radical founding paper of 1933, the Regina Manifesto.

“The Leap Manifesto reassembles, in many ways, the Regina Manifesto,” said Morle Scheene, a delegate from Edmonton whose parents assisted the founding convention of the pre-NDP Co-operative Commonwealth Federation (CCF) in 1933.

Scheene, who has been part of the CCF-NDP for decades, said the Leap Manifesto could help pull the party back to its left-wing roots.

Avi Lewis, one of the manifesto's main backers, agreed, saying both manifestos were aimed at solving the big issues of their time. The Regina Manifesto was aimed at helping workers, farmers, the sick — meanwhile, the Leap Manifesto was drafted to solve the crisis of climate change and social inequality in Canada.

The manifesto will “play a key role in the renewal of the NDP, rooting the process in a bold, inspiring, left vision of Canada… the manifesto is a high-level statement of principles that is in line with the aspirations, history and values of the party,” Lewis said.

“(Both manifestos) have similar fundamental values where it is about caring about humans, or the nature,” he said, adding that both co-operative economic models, and have same political goals of “stability and sustainability.”

The Leap Manifesto: an echo of the party’s radical past

In this struggle for identity, even before the NDP convention officially started, two dozen NDP riding associations drafted their own resolutions urging the party to embrace the manifesto, and the NDP youth caucus even pushed to adopt the Leap Manifesto in its purest form.

After a heated debate on the floor of the convention, the party voted not to adopt it, but supported a resolution for riding associations to debate the manifesto in ridings across the country as part of a pre-convention policy process leading to 2018 NDP convention.

But in addition to giving new direction for NDP delegates, the Leap Manifesto was also a source of conflict in the party, with many from Alberta speaking out against it.

Alberta NDP Premier Rachel Notley, most notably, warned at the event that embracing the Leap Manifesto would damage the NDP's electability. She strongly urged Canadians to support building oil pipelines to tidewater and help Albertans struggling with the oil crisis.

Her argument was countered by Stephen Lewis, a former Ontario NDP leader, as he gave an impassioned speech in defense of the manifesto's principles. He argued that renewable energy would be the great job creator of the 21st century, which would ultimately lead Canada toward a brighter economic future.

Not everyone at the convention shared his enthusiasm. Delegates from Alberta were especially cautious about the manifesto.

"What concerned me about the Leap Manifesto is, it excludes a lot of people who depend on good paying jobs to support their families — I think it’s a little short sighted," said Jeremy Johnston, a delegate from Alberta.

"I would just hope that the strongest proponents of the manifesto can come to reason and understand that there actually is a solution that benefits oil and gas and renewables."

Mike Hubert, also from Alberta, says the party have to deal with reality, and described the Leap Manifesto as being too radical.

“Somewhere between Rachel Notley and green part of this party is where we are going to end up,” he said.

One thing was clear at the end of the convention: whoever enters the NDP leadership race will have to face to the party’s identity crisis and ongoing ambivalence over fossil fuel project development.