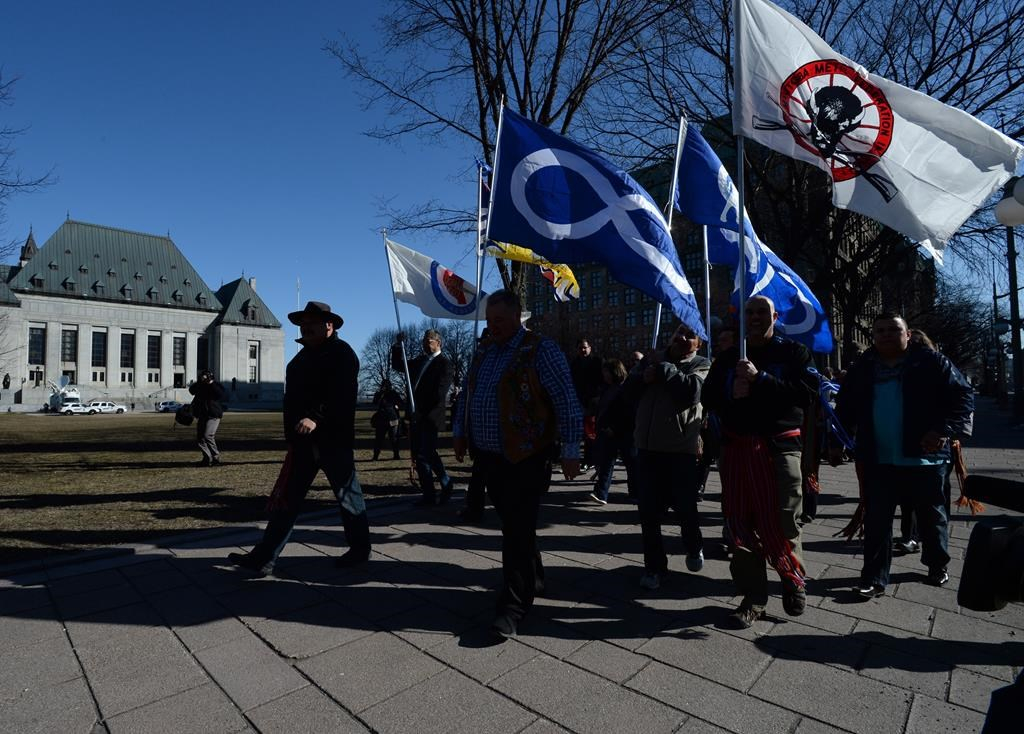 Canada’s 600,000 Metis and non−status Indians are indeed "Indians" under the Constitution, the Supreme Court of Canada declared Thursday in a long−awaited landmark decision more than 15 years in the making.

"It is the federal government to whom they can turn," the unanimous 9−0 ruling said.

The high court was also asked to rule on whether the federal government has the same responsibility to them as to status Indians and Inuit, and whether they have a right to be consulted by the government on their rights and needs.

No need, the court said.

"Restating this in declarations would be of no practical utility."

The Congress of Aboriginal Peoples joined with several individuals, including Metis leader Harry Daniels, in taking the federal government to court in 1999 to allege discrimination because they were not considered "Indians" under the Constitution.

Some 17 years later, the ruling is sure to have an impact on the relationship between the federal government and 600,000 Metis and off−reserve Indians across the country.

Daniels died in 2004, and his son Gabriel was added as a plaintiff the following year.

"I’m overwhelmed, I have a heavy heart right now," an elated Gabriel Daniels said after the decision was handed down.

"I am just thinking about my dad. I’m not going to start crying... He would be climbing the walls … he would be happy but he’d be focused on things to come."

In the moments following the decision, the building’s foyer filled with Metis and aboriginal stakeholders, all of them barely able to contain their delight. As they spoke, whoops of joy and hollers of celebration echoed through the building.

One Metis leader said the ruling would have implications for future negotiations with the government over lucrative natural resources.

Ron Quintal, president of the Fort McKay Metis Community in Alberta, said his community is "completely surrounded" by oilsands development.

"The oilsands and government have always walked over top of us and it’s been hard for us to get any kind of consultation or any type of mediation for that matter with the oil companies," he said in an interview.

"This is going to allow us to have an actual voice where industry and government have no choice but to work with our people."

Abella said Thursday’s ruling was another chapter "in the pursuit of reconciliation and redress" in the long history between Canada and its Indigenous People.

"The constitutional changes, the apologies for historic wrongs, a growing appreciation that aboriginal and non−aboriginal people are partners in Confederation . . . all indicate that reconciliation with all of Canada’s Aboriginal Peoples is Parliament’s goal," Abella wrote.

The government considered Metis to be Indians as far back as 1818 and the notion was upheld after Confederation, Abella wrote in a ruling that offered a sweeping review of government inquiries and studies of aboriginal relations dating back decades.

"Both federal and provincial governments have, alternately, denied having legislative authority over non−status Indians and Metis," the ruling said.

"This results in these indigenous communities being in a jurisdictional wasteland with significant and obvious disadvantaging consequences," it added, which included depriving them of programs, services and other government benefits.

Jason Madden, lawyer for Metis National Council, an intervener, said the ruling was a "game changer" and a "slam dunk" because it upheld the notion that the government has a duty to negotiate with Metis.

"There is no way that the federal government can avoid or hide from this issue any longer," he said in an interview. "It’s got to be positive negotiations with Metis just as much as there is with First Nations."