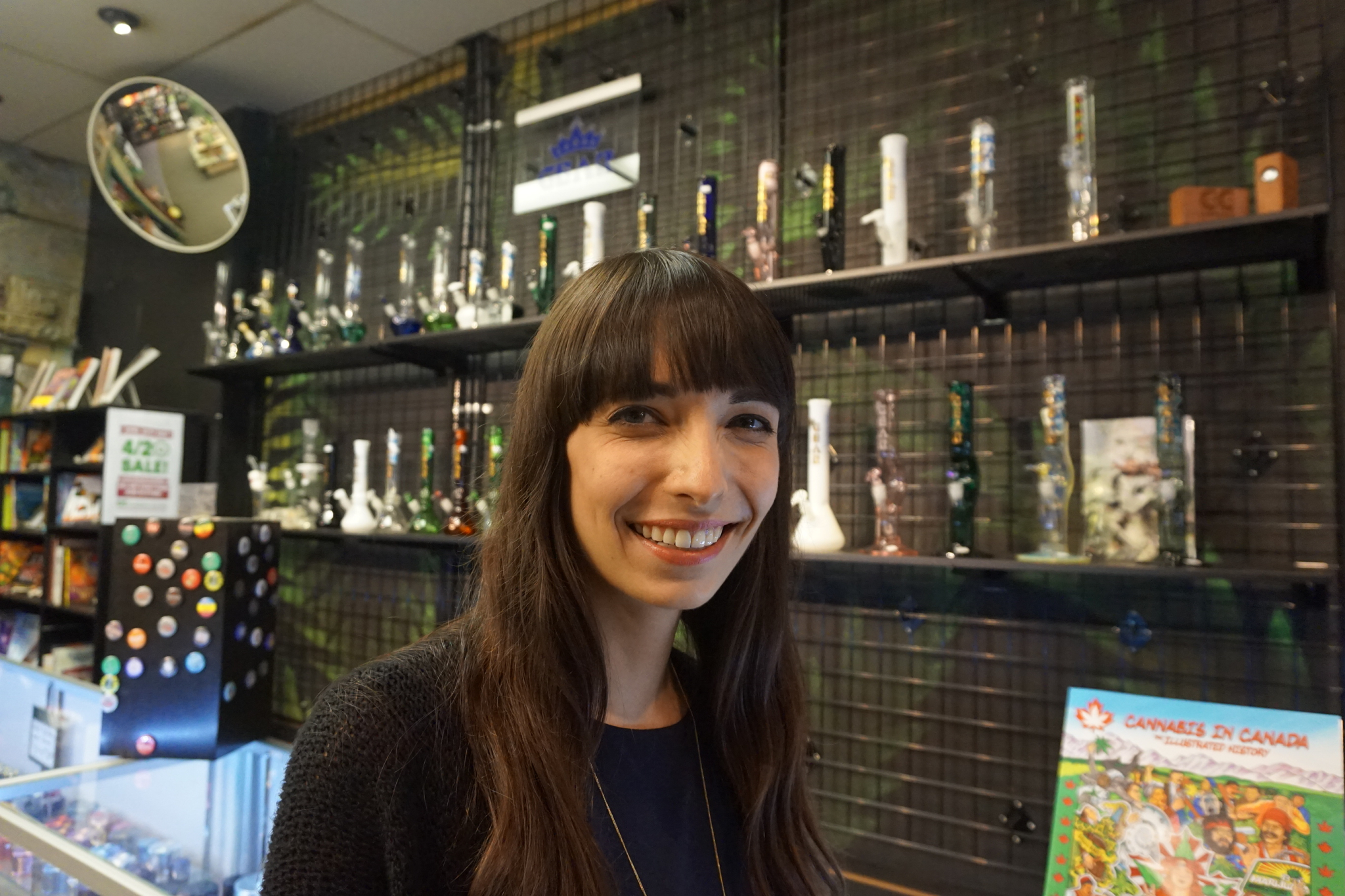 Visitors to downtown Vancouver would be forgiven for assuming marijuana is legal in the city.

In the building where Jodie Emery works, the smell of marijuana permeates every room. Colourful, pro-weed posters are plastered all over the walls in the stairwell, and people casually walk in and out with the substance, sometimes stopping to pet one of several cats lounging on the floor.

An estimated 50,000 people are expected to show up on Wednesday for Vancouver’s annual 4/20 celebration, which will be held at Sunset beach this year. Pot smokers use "4/20" as a code word for their pastime and traditionally celebrate this every year on April 20.

“Everyone thinks it’s legal, so they’re all expecting to come out and party,” said Emery, an outspoken marijuana advocate. She's the co-owner of Cannabis Culture and wife of "prince of pot" activist Marc Emery.

In reality, marijuana is still not legal—police report a pot possession incident every nine minutes in Canada. When the Liberal party campaigned last year on the promise of legalizing and regulating marijuana, pot advocates were excited by the prospect of a pro-marijuana prime minister who openly admitted to smoking pot in the past.

"We made posters and the website as well, and I campaigned for a year as a Liberal Party nomination candidate for Vancouver East, and spent years more promoting the party and signing up members," recalls Emery, who focused the 2015 Vancouver 4/20 event at urging people to vote Trudeau and oust Stephen Harper.

“It was a great celebratory mood," Emery recalls, of the election. "We thought we just had to get rid of Harper and [then] everything would be great....and it’s not quite that way."

Since then, government efforts to legalize weed appear to have hit a snag, due to complications with international treaties.

"I'm very disappointed and concerned that the Liberals aren't including marijuana experts in their consultations so far, which are only including groups like police and mental health experts— the traditional opponents of legalization," Emery says.

"Bill Blair did tell me in person in Parliament at the Liberal Senate Legalization Forum in February that he would like to speak with me. But he hasn't reached out yet." Blair, a former Toronto police chief who's now leading the legalization file, is currently in New York attending UN talks on the war on drugs.

Meanwhile, the industry of marijuana growers and dispensaries has taken root in Vancouver and sprouted in other Canadian cities. With legalization still in relative legal limbo, city governments have begun stepping in to regulate and manage the industry.

In Vancouver, new zoning laws which mandate that dispensaries cannot operate within 300 metres of each other, or near schools or community centres come into effect on April 29.

Roughly two-thirds of the dispensaries in the City are threatened by these changes, and of the 176 business applications submitted by dispensaries last year, just 11 were approved.

In Toronto, city councilor Joe Cressy is calling for the closure of every dispensary in the city, citing the illegal nature of the business.

It all seems unnecessary to Emery, who views dispensaries as a positive force in the community, providing a service to fulfill existing marijuana demand in a safe and open way.

“The cities should really just back off and wait for the federal government to decide in the next five months what legalization will look like,” said Emery. "There’s no reason to keep fearing, and trying to push marijuana into the shadows. The fact that politicians are against legalization, means that they’re for prohibition, which means that they’re supporting organized crime. Any politician who is opposed to marijuana being legal and above board is asking for it to stay underground, and for the same problems we experience today to go on forever in the future.”

Last February, Justice Michael Phelan struck down existing laws around growing medicinal marijuana in the home as unconstitutional, giving the government six months to draft new legislation on the issue. In a sense, he set the deadline for the Libreals to make progress toward legalization.

To Emery, the difficulty lies with the implementation.

“It’s a concern that government and the lobby groups want to control this industry, but the industry already exists. The growers and dispensaries that are operating right now are meeting the needs of the people. It doesn’t make sense for pharmacies or liquor stores to want to try and take this industry away,” said Emery.

As for concerns about quality control, including recent warnings that some marijuana in the province was laced with fentanyl - a powerful and potentially deadline painkiller - Emery argues such products wouldn't be sold by dispensaries.

"There aren’t any dispensaries out there who want to sell some hard drugs mixed in with the weed,” she said, saying many stores do their own testing for mould or other substances that could harm the user.

Introducing a new tax might also be complicated. With substances like alcohol and tobacco, an excise tax— more commonly called a “sin tax” — is implemented to discourage their use. But taxing marijuana could be tricky, since it can also be used for medical or pain treatment purposes.

“It’s all sorts of different things to different people, so it’s a challenging thing to try and regulate,” said Emery.

“I think we need to look at two different standards for Marijuana quality control. You’ve got the general public at large who don’t mind smoking a joint, and you’ve also got those who want [medical marijuana]."

She said as a start, policy makers should consult marijuana advocates with strong community ties who can help advise on comprehensive legislation.

“We hope that the federal government will actually turn to those that actually know everything about marijuana. Right now, it just seems like they want to introduce a new form of prohibition called 'legalization,” said Emery.

With more and more countries looking to legalize marijuana, the UN General Assembly Special Session on drugs could potentially reflect a shift in international opinion towards recreational drugs.

For the local stores that are faced with closure on April 29, however, the more immediate concern is whether they will be able to keep existing at the end of the month.

“All they want is to stop being punished and ostracized and targeted,” said Emery. “They want their product to be legal.”