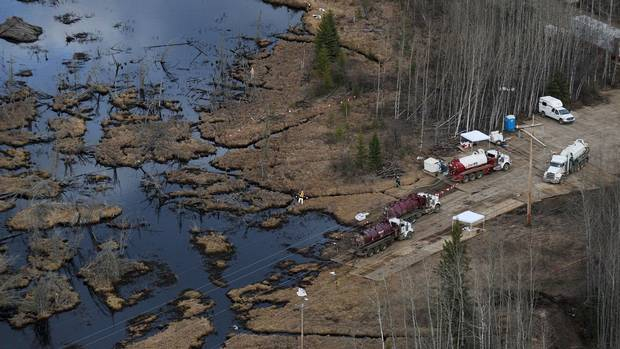 "Aging infrastructure is an issue for the province," said Jim Ellis, head of the agency which released a three-year strategic plan this week.

Ellis said the regulator has already compiled a database that locates and assesses Alberta's thousands of abandoned wells. Now it's time to do the same for pipelines, wellheads, compressor stations and all the other industrial facilities a century of energy development has left on the province's landscape, he said.

"We now have a database on what wells there are, what state they're in," Ellis said.

The database is to be compiled from agencies that preceded the current regulator, which brought together three different bodies in 2013. By the time it's complete in March 2018, the database will detail the age, location and condition of about 415,000 kilometres of pipe and 50,000 oil and gas facilities.

The facilities — especially pipelines — will be ranked according to the human health and environmental risks they pose and dealt with accordingly, said Ellis.

He pointed to the effort his agency is already making on cleaning up 37,000 abandoned wells that dot Alberta. By January, he said, 6,800 such sites had been cleaned up.

Targets and procedures for pipeline cleanups are being developed.

"We will sit down with stakeholders and government to look at this and determine how we're going to move through this."

The regulator also hopes to increase public confidence in its work. It wants its overall approval among Albertans who are aware of the agency to increase to 80 per cent from about 77 per cent.

Polling released last summer suggested approval rates by industry were already at 90 per cent. That means the regulator will have to work on First Nations, landowners and environmental groups, where only between half and two-thirds of respondents were confident in its ability.

"We know that's the focus we have," said Ellis.

"One of the things I want to do over the next couple of years is to refocus on indigenous people. As a regulator, we can do a better job."

First Nations have criticized the agency for not allowing them to speak at public hearings on energy projects adjacent to or on their traditional land. Ellis wouldn't comment on whether the regulator would loosen its rules on who gets standing to appear.

He did point out a recent pipeline hearing held a special session on the Driftpile First Nation to make it easier for elders to testify.

Chris Severson-Baker of the Pembina Institute, a clean-energy think-tank, said there's real urgency to tidy up the legacy of Alberta's oilpatch.

Low oil prices have crimped the cash flow that used to pay for cleanup, he said. As well, carbon pricing will place further demands on industry funds.

"That may mean there's more infrastructure there that needs to be reclaimed and cleaned up," said Severson-Baker. "We need to make sure that there's a lot of progress on that in the next few years in order to avoid a situation where there's not enough cash."