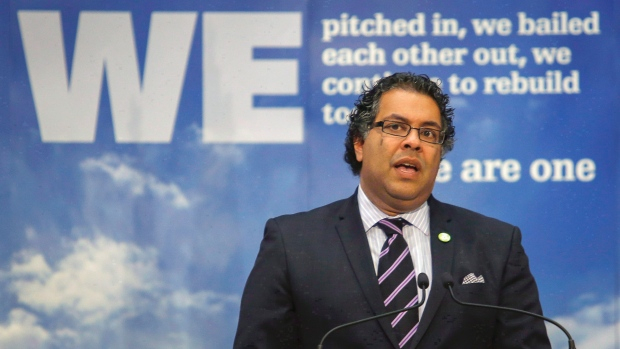 Calgary Mayor Naheed Nenshi has apologized in a news release for using a coarse word during the ride. Photo by The Canadian Press
Previous story
Next story

Calgary's mayor says he had no idea his comments bashing Uber were being livestreamed while he was using a rival ride-hailing service during a recent trip to Boston.

Naheed Nenshi has apologized in a news release for using a coarse word during the ride to describe Uber's CEO, Travis Kalanick, and he says he wasn't clear when explaining what he considers to be holes in Uber's background checks for drivers.

Nenshi was in Boston to give a speech at a conference at MIT and was catching a ride with Lyft when he discussed his views with the driver on ride-hailing services.

Uber Canada spokesman Jean-Christophe de Le Rue says in an email that it's "disappointing" to see the mayor "stoop to name calling" and he defended the company's background checks, noting they're the same as ones done by other national and provincial organizations.

Lyft did not immediately respond on Saturday to a request for comment.

The video has been posted on several websites, and Nenshi appeared not to be aware others were listening in until the driver told him at the end of the ride.

"Who knew I'd have my very own episode of Taxicab Confessions? I should have stuck with Carpool Karaoke," Nenshi said in the release Saturday afternoon.

"I was not aware that this driver was live broadcasting our discussion on the Internet, and he certainly didn't have my consent to do so."

Still, Nenshi said a person should be the same person in private as in public.

Uber temporarily suspended operations in Edmonton and Calgary earlier this year after the Alberta government announced it would not make insurance available to drivers until the summer. The province says it will also require drivers to have at least a Class 4 driver's licence, which is a commercial licence.

The driver states in the video that he also drives for Uber.

Nenshi explained in the release that he often uses services like Uber and Lyft when travelling to places where ride-hailing services are legal, and that he speaks with drivers so he can learn more about their jobs. He said he's always up front about who he is, and described his conversation with the driver in Boston as "free-flowing."

"I told him the story, repeating what I have said many times publicly: that Calgary's rideshare regulations are not unreasonable, and that Uber, in particular, has been very difficult to deal with. I've called them 'jerks' publicly in the past, but this time I used a more colourful term," Nenshi stated.

In the news release, Nenshi said he was not aware of anyone convicted of a sexual offence clearing the background check used by Uber in Calgary.

"I realize that I did not explain myself clearly at all. I apologize for any confusion that I have caused," Nenshi said in the release.

"It is a national standard check used by many national and provincial organizations," Uber said.