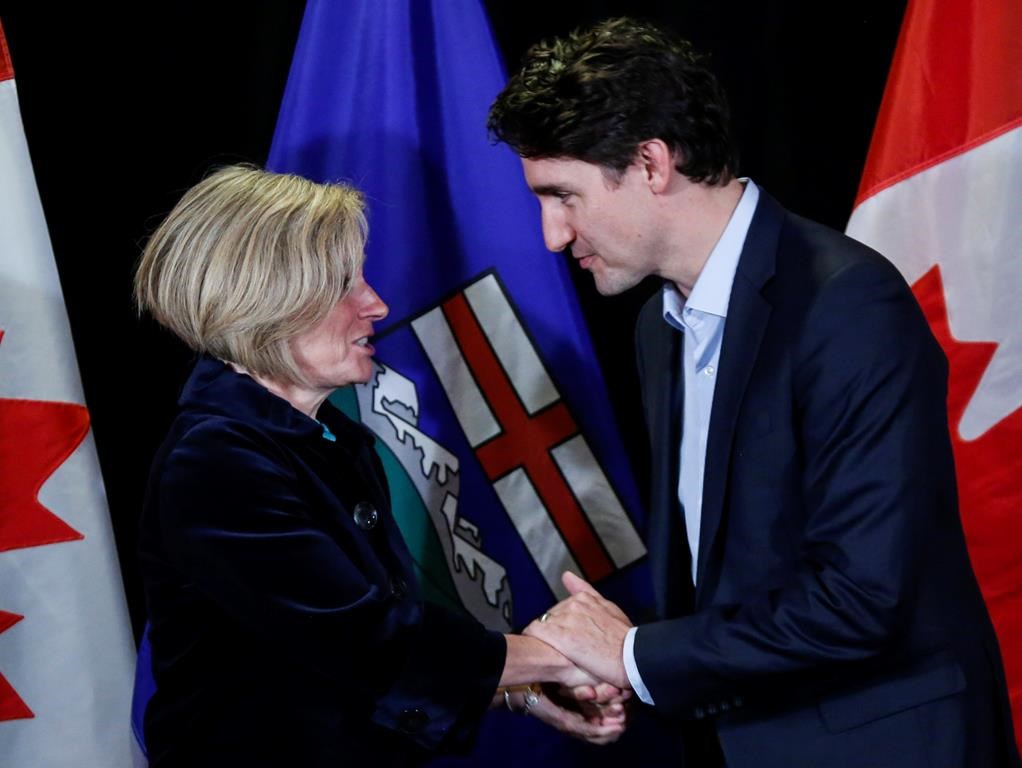 Alberta Premier Rachel Notley’s pleas to the federal cabinet to give the province a pipeline and enrich employment insurance seem to be gaining little traction.

Notley met with Prime Minister Justin Trudeau privately on Sunday and then addressed about half the cabinet at the beginning of a three−day retreat in Kananaskis, Alta.

But on Monday morning, even as ministers said the meeting with Notley was productive, there were no signs that anything was changing for the Ottawa−Alberta relationship.

"I have been tasked with implementing a formal moratorium and we’re working on that," said Garneau.

But he would not say if the ban would be temporary or permanent.

He said ministers learned more from her about the tough economic times in the province and the need for market access.

"It was very useful, and I was very glad my colleagues had the opportunity to hear directly from the premier of Alberta," said Carr.

Infrastructure Minister Amarjeet Sohi said cabinet is "keenly aware" of the challenges Alberta is facing and the need to get resources to market. But he made no promises.

"We need to get the right price for the resources that we have, and that we’re getting those resources to the international market, but we need to do it in a way that’s sustainable, that achieves the goal of economic growth as well as environmental sustainability," said Sohi.

Notley said last night that the meeting was an opportunity to educate and to emphasize the link between the province’s and Canada’s economy.

She said she emphasized the province’s new climate change policies to cabinet while advocating for more pipeline support.

"You know, two Conservative governments — both at a federal level and at a provincial level — came together to fail on the issue of getting a pipeline approved because they paired that with a refusal to deal with climate change, and a refusal to deal with the fact that people distrusted the process that was in place," she said.

Indeed, one of the first things the Trudeau government did upon taking office was to highlight the new climate change commitments made by Alberta and trumpet the new working relationship with the province.

Notley said the interests of Alberta were well−served at the Sunday meeting despite not securing any firm commitments on employment insurance or pipeline support.

Candice Bergen, natural resources critic for the federal conservatives, said the best way to help Albertans is to help the energy sector.

She said the Liberals should reverse their plans for a crude tanker moratorium, and added that the lack of updates on the issue was creating more uncertainty in the industry.

"The minute they were elected they announced they were going to be putting in a moratorium; that sent a signal that Northern Gateway was dead, then they went crickets on it, they went silent," said Bergen.

"It sent the signal, as the Liberals have been doing consistently, that Canadian oil is closed for business."