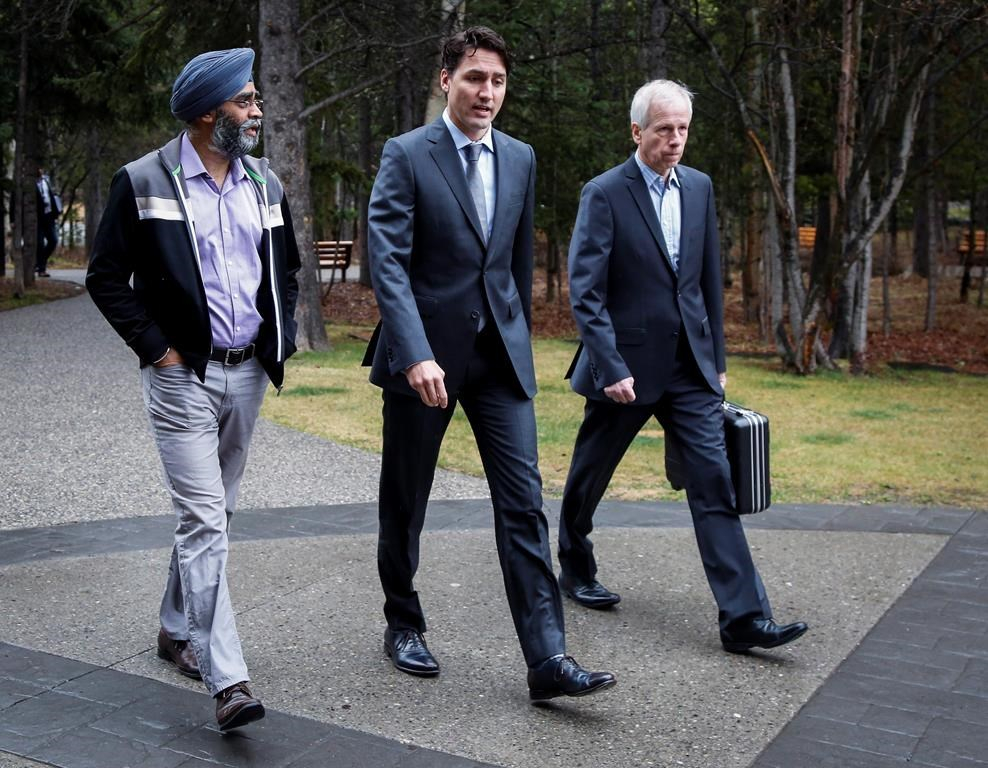 Prime Minister Justin Trudeau and his 30 ministers holed up Sunday at a luxury mountain resort in Alberta to discuss the devastation wrought by plunging oil prices on the province’s economy.

Premier Rachel Notley met privately with Trudeau and then gave a detailed presentation to about half the cabinet in the evening at which she drove home the message that a healthy Alberta economy is a necessary precondition for robust national economic growth.

She spoke of the desperate need for a pipeline to get the province’s oil sands crude to tidewater and for a quick start to job−creating infrastructure projects.

And she reiterated her objections to a recent boost in Employment Insurance benefits for hard−hit regions of the country, which wound up excluding Edmonton.

"I think that the interests of Alberta were well−served today," she said following her presentation.

However, she got no specific promises on any of the issues she raised.

And not all cabinet ministers attended the detailed session with Notley, choosing instead to attend other presentations being given at the same time or to flit from one to another.

Among those who didn’t plan to attend Notley’s presentation was Finance Minister Bill Morneau, whose maiden budget last month introduced the EI changes and promised billions in infrastructure funding.

"I’m going to another presentation right now. I think hers is over−subscribed," Morneau told reporters during a brief break.

Nevertheless, he said the mountain location of the three−day retreat was "very much on purpose because we wanted to be here in Alberta ... to understand better the challenges."

Morneau defended the formula by which the federal government calculated which regions of the country are entitled to beefed up EI benefits but appeared to leave the door open a crack to modifying it.

"That’s where we’re at right now and I appreciate that Premier Notley, you know, is anxious to make sure that people across the province are well served."

On pipelines, Natural Resources Minister Jim Carr said the federal government understands "how important the energy sector is for Canada and for Alberta; we know that the sector is going through a very difficult time at the moment."

But he offered no new hope for speedy approval of any of the three proposed pipelines that are currently mired in the environmental review process and facing stiff uphill battles with public opinion.

"We want to move our natural resources to tidewater sustainably and we’ve announced a set of principles that will guide us along that way," Carr said.

Notley said she agrees with the approach the Liberal federal government is taking, which she argued is more likely to produce results eventually than the pipeline cheerleader approach taken by the previous Conservative governments in Ottawa and Edmonton.

"You know, two Conservative governments — both at a federal level and at a provincial level — came together to fail on the issue of getting a pipeline approved because they paired that with a refusal to deal with climate change and a refusal to deal with the fact that people distrusted the process that was in place," she said.

Like Trudeau, she argued that Canadians are more likely to support a pipeline if they have faith in a beefed up environmental review process.

Notley spent some time during her presentation educating federal ministers on her own government’s climate change plan, including a cap on greenhouse gas emissions.

"We are working with them to sign bilateral agreements as quickly as possible and our goal is not to lose this construction season," he said.

Earlier Sunday, as the prime minister and his ministers arrived for the retreat, Trudeau said the gathering would give cabinet a chance to focus on the "challenges and opportunities" facing Alberta.

It’s also a chance for his cabinet to take stock of what they’ve accomplished in their first six months in power and "all the hard work" that lies ahead, he said.

This is the second cabinet retreat Trudeau has held.

The first, at a seaside resort in New Brunswick in January, cost almost $150,000 and the price tag for this one is likely to be similar.

But Trudeau said it’s important for him and his ministers to get out of the Ottawa bubble.

"One of the things we talked about a lot during the ... election campaign was the need to get out and be strong voices for our communities in Ottawa," he said after strolling through a chilly rain with his ministers shortly after arriving at the Delta Lodge at Kananaskis, a spectacular resort nestled in the Rocky Mountains about 80 km. west of Calgary.

"And that requires us, MPs and ministers, to be engaged on the ground, connecting with people and that’s exactly what we’re doing."

In addition to Notley, ministers could attend other presentations Sunday by several experts:

— Management consultant Dominic Barton, recently appointed by Morneau to head up his economic advisory council, which is supposed to advise the government on how to foster economic growth in the face of the collapse in oil prices.

Head of the prestigious global consulting giant McKinsey & Co., Barton has close ties with business and governments in Asia. He was to give a presentation to cabinet about "China and the global growth agenda."

— Dan Gardner, co−author of "Superforecasting: The Art and Science of Prediction."

The retreat wraps up midday Tuesday.