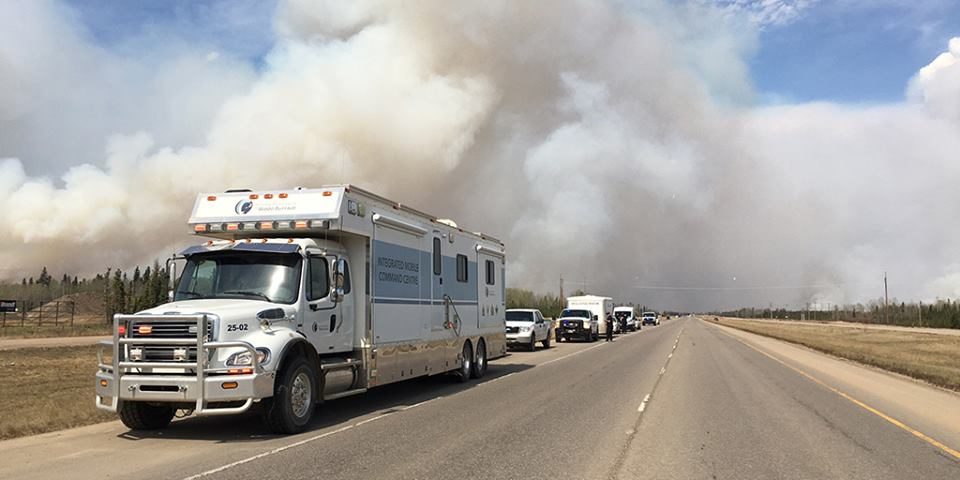 A massive convoy is underway to move evacuees stranded at oilfield camps north of Fort McMurray, Alta., through the fire-ravaged community to safe areas south of the oilsands capital.

The RCMP and military are overseeing the procession of an estimated 1,500 vehicles, which began around 6 a.m. Friday, four days after a mandatory evacuation of Fort McMurray that was triggered by a nearby wildfire.

Sgt. John Spaans, an RCMP spokesman, said 50 vehicles at a time are being allowed to go through Fort McMurray on Highway 63.

Spaans said the RCMP will be marshalling the movement with cars at the front and rear, with police monitoring progress overhead in military helicopters.

"That's why we had the helicopters ... just to make sure the motorists and responders are safe in case there's a sudden change in fire direction," he said.

"They would be able to notify everyone immediately."

All intersections along the convoy route have been blocked off to ensure no one goes astray. Police said no one will be allowed to stop.

It's hoped that all the vehicles can get out of the area Friday, if the weather, fire and road conditions co-operate, Spaans said.

Prime Minister Justin Trudeau said Friday that Ottawa has met all of the Alberta government's requests for assistance, including providing air assets and 7000 cots for evacuees in emergency shelters, with 13,000 more on the way.

"We continue to monitor the situation closely with high temperatures and shifting winds changing rapidly, and we continue to urge caution to all evacuees," Trudeau said at a funding announcement in Toronto.

"I'd like to remind folks to keep donating the Red Cross. The federal government will match individual donations as we all stand together, as Canadians do, for our friends and family."

Crews fighting to save Fort McMurray from rampaging flames water bombed the city Thursday to try to keep away a wildfire so intense it has spawned its own weather.

"It was creating its own high winds yesterday and even lightning was coming from the smoke clouds it created," Chad Morrison of Alberta Forestry told a briefing in Edmonton on Thursday.

He said the fire continued to grow Thursday, but at a slower rate than before, and the spread was happening in forested areas away from the community.

"We're still here, we're still battling," he said. "Things have calmed down in the city a little bit, but guys are out as we speak, fighting fires, trying to protect your property.

"The beast is still up, it's surrounding the city, and we're here doing our very best for you."

Officials could not update the number of structures that have burned — already at 1,600 — saying crews had not had the time.

Morrison said there were 22 water bombers at work and more were coming in, including four from Quebec.

"But let me be clear: air tankers are not going to stop this fire," he said. "It is going to continue to push through these dry conditions until we actually get some significant rain."

Meanwhile, firefighters continued to fight the blaze near the evacuated community of Anzac, where the flames were getting closer to buildings.

The risk in the rest of the province also remained high and a provincewide fire ban was issued Thursday afternoon.

Premier Rachel Notley told a news conference Thursday that officials cannot speculate on when it might be safe for residents to return to the city except that "it will not be a matter of days."

She said even when the fire situation is brought under control, officials will need time to assess buildings and infrastructure so that people can be brought back safely.

"Trust us that we have your backs."

The fire, which had been menacing the oilsands capital since the weekend, rode a rapid shift in winds Tuesday afternoon to cut through the city on an east-west axis. It divided the main road and sent 80,000 residents fleeing in opposite directions under a mandatory evacuation order.

The fire remained wrapped around the west and southern edges of the city. If Fort McMurray were the face of a clock, flames surrounded it from the numbers four to 11.