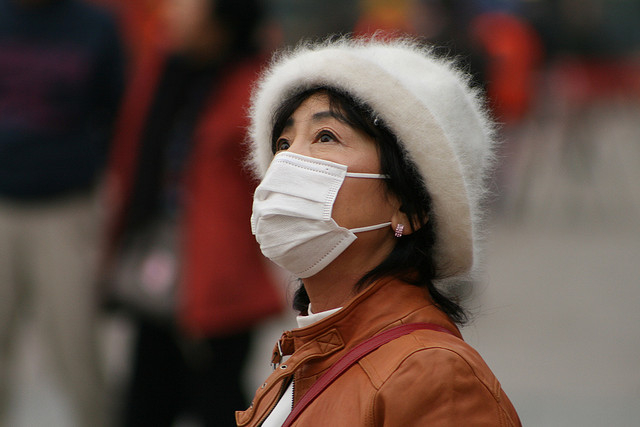 Woman protects herself from pollution in China. December 3, 2009. Photo by Nicolò Lazzati.
Previous story
Next story

More than 80 per cent of people who live in major cities around the world are exposed to dangerous pollution that puts their health at risk, says a new report released today by the World Health Organization (WHO).

Cities with the lowest-income populations are the most affected, the report said, based on data from 3,000 cities in 103 countries.

Dr. Carlos Dora, who is the coordinator for the organization's Interventions for Healthy Environments unit, said this information provides some compelling reasons for governments to do more to tackle pollution from industrial smokestacks, while increasing renewable power production - such as solar and wind - and promoting more rapid transit options.

But based on a database of urban air quality, 98 per cent of cities in low- and middle income countries with more than 100,000 inhabitants do not meet WHO air quality guidelines. In high-income countries, that percentage decreased to 56 per cent, the report said.

The research was based on a review of small and fine particulate matter (PM10 and PM2.5) in 795 cities in 67 countries between 2008 and 2013. PM10 and PM2.5 include pollutants such as sulfate, nitrates and black carbon, which penetrate deep into the lungs and into the cardiovascular system, posing the greatest risks to human health.

Among other key findings, the organization discovered that global air pollution levels increased by eight per cent, and that low-and-middle-income countries in the Eastern Mediterranean and South-East Asia Regions experienced the highest spikes, with annual mean levels often exceeding five to 10 times the recommended WHO limits.