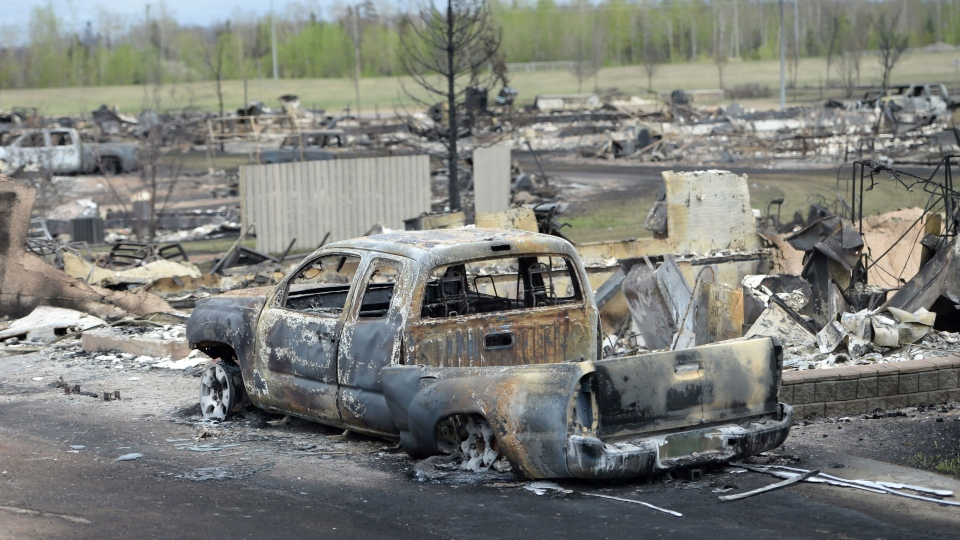 A burned pickup truck lies in the rubble of the fire-damaged city of Fort McMurray, Alta. on Monday, May 9, 2016. Photo by Canadian Press.
Previous story
Next story

As Fort McMurray continues to smoulder in the wake of raging wildfires, an Insurance Bureau of Canada (IBC) expert is grimly assessing the nation's losses from climate instability.

From the devastating 2013 floods in southern Alberta, which cost the insurance industry $1.8 billion, to the massive fire that destroyed much of Slave Lake, Alta. in 2011, leading to more than $700 million in damages — there's no denying that climate change is a reality from the perspective of insurers.

"It’s happening," said Bill Adams, IBC vice-president for the Western and Pacific Region. "The wake-up call is now. There has been a radical shift in the frequency, severity and nature of insurance claims that we’re seeing as an industry in Canada."

According to IBC, insurance payouts from extreme weather have more than doubled every five to 10 years since the 1980s, and since 2010, claims have hovered between $1 billion and a historic $3 billion, compared with an average of $400 million per year from 1983 to 2008.

Today, insurance companies across the country are gearing up for what promises to be one of the costliest — if not, the most costly — natural disaster in Canadian history in the oil town of Fort McMurray, where a wildfire so powerful it has been nicknamed “the beast,” has ravaged homes since last week.

More than 2,400 structures have been destroyed and another 500 have been damaged.

"I don't think we are adapting to our new weather reality nearly as quickly as we need to," Adams insisted. "I think most Canadians are largely if not (completely) oblivious. Those who are paying attention are those who have either always been engaged and had an understanding of it, or people who have been affected."

While the Fort McMurray fire alone is not enough to raise insurance premiums, he explained, a rash of wildfires across the country certainly could. It could take anywhere from one to three years to establish a trend, and once a trend is established, the costs will likely rise.

They certainly did after the 2013 floods in southern Alberta, he said, where some insurance companies are reported to have raised their average home insurance premiums by up to 20 per cent.

A graphs shows an upward trend of natural disaster claims in Canada over three decades. Graphic by the Insurance Bureau of Canada.

An analyst from the Bank of Montreal estimated last week that insurance claims related to the massive blaze in Fort McMurray could top $9 billion, but boots have yet to hit the ground for a formal damage assessment of the city, where firefighters are continuing to monitor hot spots and wind patterns that could bring the flames raging back into tow.

People who live in dry areas "should be concerned"

If there is one lesson to be learned from such disasters, it's that governments and homeowners can all take steps to be more prepared when tragedy strikes, said Sumeet Gulati, professor of environmental and resource economics at the University of British Columbia,. An attitude of "complacency" is dangerous, he explained, as the signs of a changing climate — increased precipitation, warmer temperatures, earlier snow melts, etc. — are everywhere for all to read.

On the part of municipal, provincial and federal governments, the professor said emergency preparedness means co-operative urban planning that reflects the risks. Communities in danger of fire, flooding, drought, or earthquakes should include appropriate infrastructure, he explained, and it's time to update building codes to better handle disaster.

He acknowledged that such preventative planning is expensive, potentially signaling the end of high-risk hillside, river, and coastal properties. It could also mean re-zoning Crown and municipal land and even going so far as to rule that Canadians cannot live in certain areas.

“Eventually we’ll learn either to budget more or not to be in harm’s way," Gulati said simply.

Co-operation between governments and insurers

Adams, too, encouraged more co-operation between levels of governments in dealing with the climate crisis. For decades, he said, each has downloaded the costs and responsibilities of preparedness to one another, resulting in a heavy burden on homeowners and municipalities with fewer resources to tackle the problem.

“We need to have a much more holistic approach to understanding the risks we face as a country, as provinces and at the community level, and all be committed to doing our part to building a more resilient Canada," he told National Observer.

One area where governments and the insurance industry in particular have an opportunity to collaborate, he explained, is policy adaption in the face of extreme weather events. Even after Alberta's epic floods in 2013 for example, overland flood insurance remains widely inaccessible throughout the country — either it's too unaffordable for those in high-risk areas, or they simply cannot be insured.

“It likely never will be available to those who are at the highest risk of flooding,” he said. “We could insure 90 per cent of Canadian homes from water however it gets in, but that would deal with about zero per cent of the problem we face in our country.”

This is where governments can chip in and make sure such options are available to everyone, he explained. At that point, the burden rests with the country's homeowners, who can fortify their properties for whatever extreme weather may target their region, he added.

This is sound advice, according to John Clague, a professor of natural hazards research at Simon Fraser University, who encouraged Canadians to heed the warnings of insurance companies.

"The reinsurers have a very strong research base," Clague explained. "They’re probably some of the most knowledgeable groups on climate change, short of atmospheric scientists.”

The Insurance Bureau of Canada predicts the frequency and severity of extreme weather events will increase over the next few decades.

Clague encouraged Canadians to disaster-proof their properties before tragedy strikes, whether that means installing fire-resistant roof shingles, a backwater valve in the basement to prevent sewer overflow, or upgrading to insulated concrete walls. From clearing gutters regularly to making sure wall cracks are sealed, he said there are dozens of measures homeowners can take to reduce their risk in the event of extreme weather.

"It may all be seem trivial, but in fact if those are practiced you really do reduce the amount of loss when a wildfire occurs," Clague explained. "People don’t like it, but tough luck. There still is going to be risk, but you can lower it.”

These are great ideas for

These are great ideas for adapting to the threats of climate change. Maybe now that the insurance industry is aware of the cost of this world-wide threat, we can take action to stop the activities that are causing the problem, like the fracking that is causing huge increases in methane emissions, destroying air, water and soils and severely damaging human and animal health in Alberta.