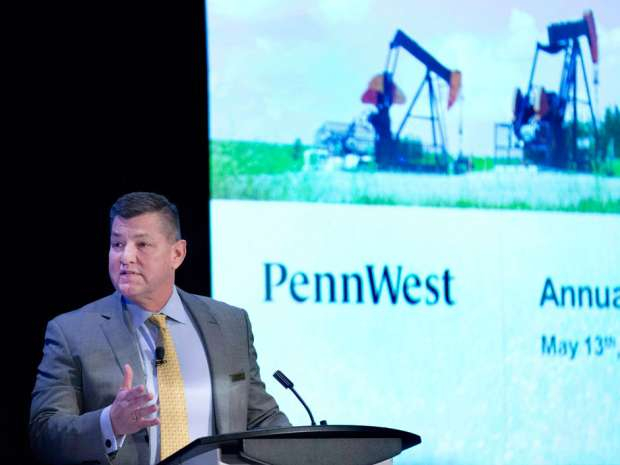 Penn West President and CEO David Roberts at the company's annual general meeting in Calgary on May 13, 2015. File photo by The Canadian Press.
Previous story
Next story

Concerns mounted in the oilpatch after one of Calgary’s oldest oil and gas production companies warned Monday it was facing the possibility of defaulting on its debt by the end of next month.

Penn West Petroleum Ltd. (TSX:PWT) said it could be in violation of its agreements with its lenders by June 30 if it can’t negotiate some form of loan relief.

The firm, the latest member of the oilpatch to face a showdown with lenders amid depressed crude prices, said it has hired investment banking firm Rothschild Group and accounting company PwC as advisers to try to ease its loan conditions.

A default would allow the lenders to demand immediate repayment.

"We are focused on reaching an agreement with our lenders in the current quarter," Penn West chief financial officer David Dyck said on a quarterly earnings conference call.

"Otherwise, at current commodity price levels, we believe we will not be in compliance with our existing financial covenants at the end of the second quarter."

Dyck said Penn West was in compliance as of the end of the first quarter on March 31.

Meanwhile, junior oilsands producer Connacher Oil and Gas Ltd. (TSX:CLC) announced Monday afternoon it had asked an Alberta court for protection from its creditors under the Companies’ Creditors Arrangement Act.

Connacher emerged from court protection last May after arranging a restructuring that resulted in creditors owed $1 billion taking almost all of its equity. It said Monday it plans to ask the court for permission to seek a buyer.

Penn West president and chief executive Dave Roberts said Monday that Penn West will continue to sell assets, adding to $1 billion in sales since the end of last year.

"I believe we can achieve more and we will continue to strive for additional asset dispositions to further reduce our debt," he said on the call. "Our top priority for 2016 remains improvement in the health of our balance sheet."

Under an agreement with its lending syndicate, Penn West must maintain a certain ratio of senior and total debt to adjusted earnings. But low commodity prices and shrinking production have reduced earnings much faster than debt.

Analyst Brian Kristjansen of Dundee Capital Markets said even if Penn West is able to negotiate loan relief, it will likely pay for it in much higher interest, and it may be forced to sell off oil assets it otherwise wouldn’t.

"The company has said repeatedly in the past they are not going to sell their best assets but, when push comes to shove, they’re going to have to," Kristjansen said.

While all Calgary energy producers have been hit by lower commodity prices, Kristjansen said intermediate−sized Penn West and rival Lightstream Resources Ltd. are most at risk of action by their lenders because of their high debt levels.

Earlier this month, Lightstream announced that its lenders had slashed the amount it was able to borrow from them from $550 million to $250 million, but they owe those lenders $371 million. That kicked off a 90−day countdown to renegotiate with the lenders, sell assets or pay down debt and avoid default.

"There’s a dire need for something to happen," Kristjansen said.

Shares in Penn West plunged to penny−stock status Monday, settling at 82 cents on the Toronto Stock Exchange, a decline of nearly 22 per cent from Friday’s close.

The company was founded in 1979. It reduced its workforce by 560 people last year, leaving 718 employees at year−end.