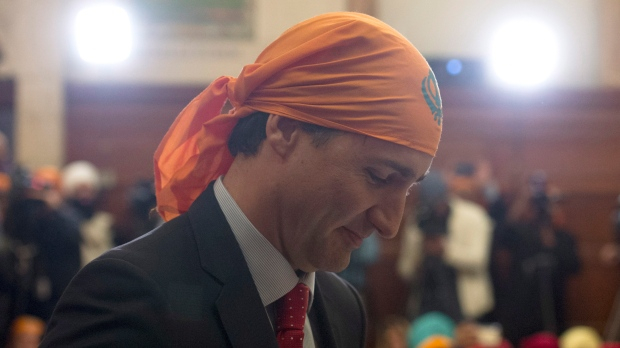 Prime Minister Justin Trudeau at a Vaisakhi celebration on April 11, 2016. File photo by The Canadian Press.
Previous story
Next story

Nimrat Randhawa's family first tried to get into Canada in 1914.

Her great-great grandfather chartered the ship Komagata Maru, filled it with 376 Indian passengers, nearly all of them Sikhs, and they sailed to the shores of British Columbia in search of a new life.

Fast forward more than a century and South Asians are the single largest visible minority community in the country, with Statistics Canada estimating that they will represent one in every three people in the Toronto area alone by 2031.

The community's influence is also reflected in the corridors of power in Ottawa — 23 South Asians, 17 of them Sikh, were elected last fall.

It's expected all will be on hand Wednesday for Prime Minister Justin Trudeau's historic apology for what happened next with the Komagata Maru some 102 years ago.

Canadian officials refused to allow the Indians in, arguing the ship's passengers were violating immigration laws even though they were British subjects just like every other Canadian of the time.

The ship was forced back to India, where 19 were killed in a skirmish with British authorities and dozens of others were imprisoned or forced into hiding, including Randhawa's great-great grandfather.

The family would continue their lives in India, the dream of moving abroad deferred for more than 70 years, until 2003 when — despite their family's history — the Randhawas applied again to enter Canada and were accepted.

Randhawa will be in the public gallery of the Commons on Wednesday to watch the apology — something that she believes will prove that the Canada her family moved to is entirely different from the one that rejected them all those years ago.

"We can say that Canada is a multicultural community," she said, "but when you start to see things like this happen, you realize that it actually is."

Multiculturalism had only just become a buzzword in the 1980s, when Moe Sihota became the first Indo-Canadian elected to the B.C. legislature and began his long, difficult crusade to correct the Komagata Maru injustice.

Sihota's initial efforts were met with ridicule and neglect. It would take until 2008 for the B.C. government to formally apologize, and another eight years for Parliament to follow suit — proof positive, he said, of how diversity can shape politics.

"The face of Canada is somewhat better represented now in our Parliament than years before," said Sihota.

"With that comes a collective understanding, sympathy and appreciation of the significance of these events and the need to apologize for them."

The Conservative government issued an apology of its own, but former prime minister Stephen Harper delivered it in B.C., not in the House of Commons. For Randhawa, it was an important distinction.

The laws that excluded her family were drafted and debated in the House of Commons and so the apology should come from there, she said.

Harper's decision not to apologize in the Commons was seen as a slight by many Indo-Canadians. The Liberal promise to do so was on Randhawa's mind last fall as she prepared to cast a ballot for the first time in a Canadian election.

"It factored in," she said. "It was time to give someone else a chance and see what they would do."