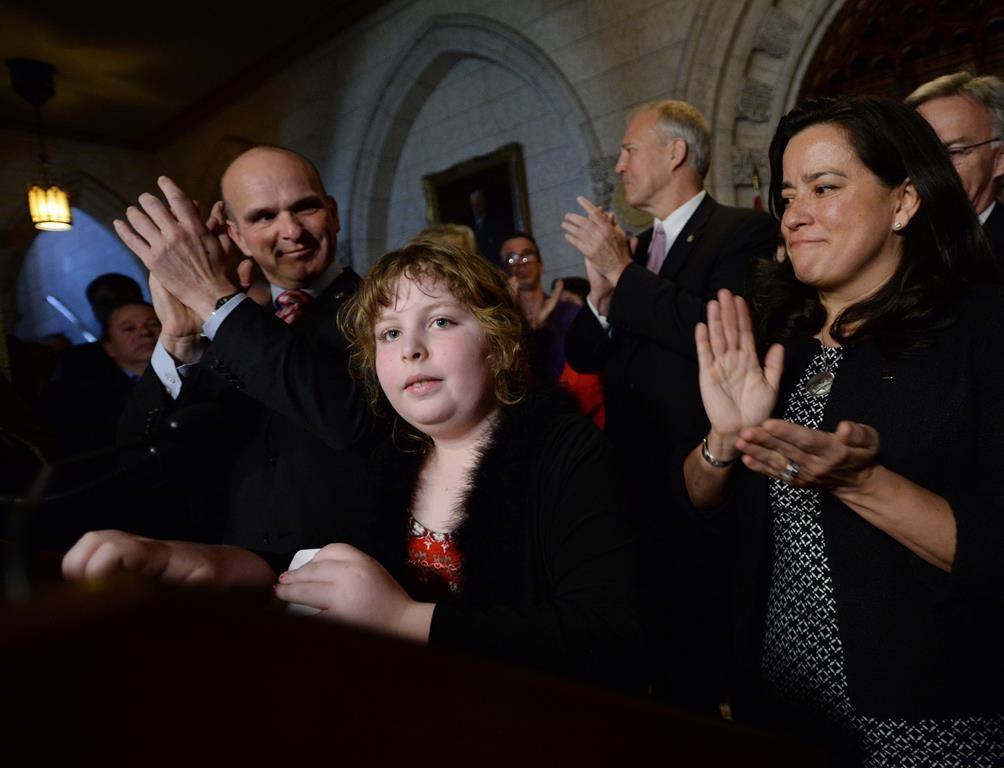 Ten-year-old transgender girl Charlie Lowthian-Rickert and Justice Minister Jody Wilson-Raybould at a press conference after introducing legislation on anti-transgender discrimination on May 17, 2016. Photo by The Canadian Press.
Previous story

Transgender Canadians and human−rights champions cheered Tuesday as the Liberal government introduced legislation that would make it against the law to discriminate on the basis of gender identity or expression.

The legislation would, if passed, make it illegal under the Canadian Human Rights Act to prevent someone from getting a job or to discriminate in the workplace on the basis of the gender they identify with or outwardly express.

It would also update the Criminal Code to extend hate speech laws to include gender identity and expression.

Criminal laws would also be updated to make it a hate crime when someone is targeted because of their gender identity or gender expression, meaning judges would have to consider it as an aggravating factor in deciding what sentence to impose.

"We live in a time when discrimination in any form is completely unacceptable," Justice Minister Jody Wilson−Raybould told a news conference Tuesday after introducing the bill.

"This is a message of hope to ensure that we recognize gender identity and gender expression and provide the ability in our country for people to feel safe and secure in who they are."

She said it is necessary to make it unequivocal in law that transgender persons have the right to live free from discrimination, hate propaganda and hate crimes.

The law was introduced on the International Day Against Homophobia, Transphobia, and Biphobia.

Ten−year−old Charlie Lowthian−Rickert, who was at Wilson−Raybould’s side throughout the news conference, stepped to the podium before a phalanx of cameras and confidently expressed her gratitude to those who had helped bring the bill to the House.

"Thank goodness this bill is passing because it will protect us from...hateful propaganda, assaults, rape — stuff like that," said Lowthian−Rickert, who was born a boy but identifies as a girl.

"It could protect us and stop the people who would have just gone off and done it in the past and discriminated or assaulted us. Now it could be stopping them and then basically punishing them if they actually do it.

"I feel much safer."

Similar legislation has failed to pass Parliament on multiple occasions, including the most recent attempt last year by NDP MP Randall Garrison, whose bill was gutted in the Senate.

This bill is different, said Garrison — who also stood alongside Wilson−Raybould in a rare display of cross−partisan solidarity — because it’s a government bill rather than a private member’s bill, which rarely become law.

Wilson−Raybould wouldn’t say whether Liberal MPs would be allowed to vote their conscience on the bill or be forced to support it. But she did say she hopes to have support from all parties.

"We look forward to have support from all sides of the House to put forward this incredibly important piece of legislation."

Later in the House of Commons, however, Garrison sought to introduce a motion that would have seen the bill passed speedily with the consent of all parties, but was promptly rejected.

Wilson−Raybould also said the law, when passed, would ensure data is collected around violence against transgender Canadians.

A survey conducted by Trans Pulse Project in 2010 showed that out of the almost 500 transgender respondents in Ontario, 20 per cent reported having been physically or sexually assaulted, though not all of them reported the assaults to police.

The respondent−driven sampling survey found 13 per cent reported being fired and 18 per cent refused a job because they were transgender.

Groups including Trans Equality Canada, Amnesty International, the Centre for Israel and Jewish Affairs, and the Canadian Association of University Teachers all praised the move by the Liberals, calling it a long overdue move in the path towards equal rights for all Canadians.

Existing human rights laws extend some protections to transgender Canadians under the sex discrimination category, but there have been few cases before the federal human rights tribunal, so the scope of the protections themselves aren’t all that clear.

The same situation exists for hate speech and hate crime laws: violence against transgender persons may have been captured before, but it wasn’t clearly spelled out.

The legislation the government introduced Tuesday would clarify all of that.

"It’s a good first step because that allows for the ability at the federal level to challenge things in court if needed," said Talia Johnson, an Ottawa−based counsellor.

"Any human rights legislation only goes so far, so we need to also work on education so that cases don’t have to come forward in the first place. It’s often very hard to prove discrimination, especially in employment and other areas like that."

Once passed, the Canadian Human Rights Commission would likely provide detailed guidance to employers and employment lawyers about what the new laws mean, and raise awareness about the news laws to the general public.