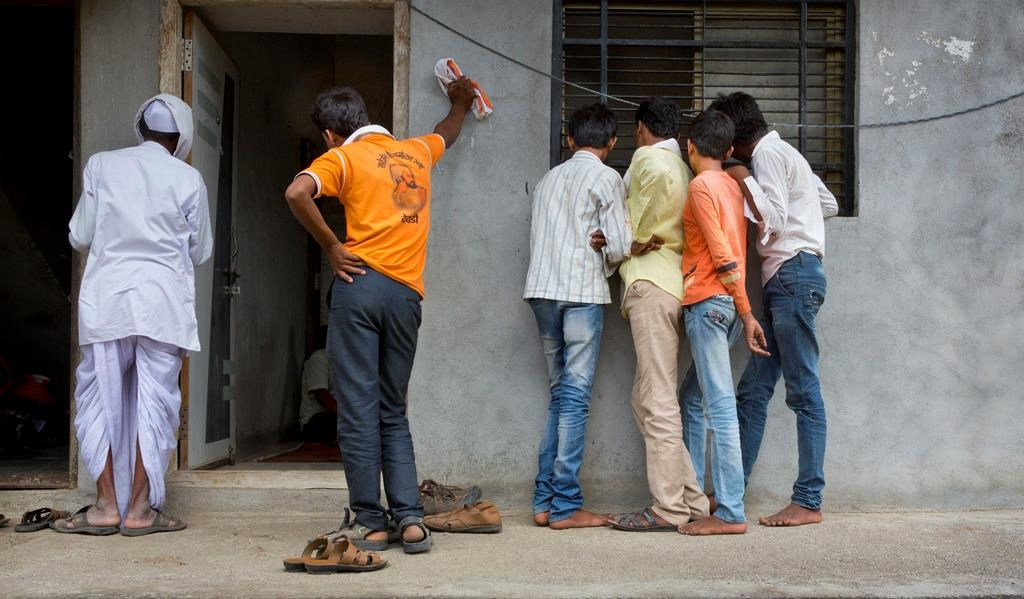 For two years the farmer was hopeful. He borrowed hundreds of thousands of rupees (thousands of dollars) to build a pipeline that connected a local dam to his fields of cotton and sugarcane. Two years ago the water stopped. The debts kept growing.

This month, Srikrishna Pandit Agee walked out into his fields in Marathwada, a central Indian region devastated by two successive failed monsoons and a crippling drought, and hanged himself from a tree.

"Constant failure of crops. Very low produce. He couldn’t recover the investments, could not pay back the bank loans. That’s why he killed himself," his brother Umesh Pandit Agee said. The widow of the 41−year−old sat with her three young children holding a framed photograph of her husband. The family still must pay back the loans or risk losing their land.

Some 400 farmers have killed themselves so far this year in the parched Marathwada region, which is home to about 19 million people. It’s located in the otherwise prosperous Maharashtra state. And it’s not alone in its sweltering misery.

The dry wells, shriveled stubble of sugarcane fields and withered fruit trees across the region reflect the suffering of hundreds of millions of Indians across at least a dozen other states that are under the grips of a severe drought.

Monsoon showers, which normally run from June to September, are crucial in a country where 60 per cent of the population works in agriculture and less than half the farmland is irrigated.

For the average farmer, who lives and earns from season to season, a poor monsoon means food must be carefully rationed because he has little money to spend.

With dreams of a good harvest, most small− and medium−scale farmers borrow money, often at exorbitant interest rates of up to 10 per cent per month, to buy seeds and fertilizers and hire tractors.

Consecutive droughts are enough to wipe out most small farmers’ meagre savings and push them into destitution.

In Marathwada, locals say the current drought is one of the worst in living memory.

The situation was so dire in that in April the Maharashtra state government began sending millions of litres (hundreds of thousands of gallons) of water to Marathwada’s worst−hit Latur district on a "water train."

Small farmers have been pushed into poverty. Poor farm labourers, hired by middlemen to work on large farms, have been forced to work for little or no money. Cattle farmers forced to bring their herds close to water supplies live in lean−tos and cook over open fires.

In every village in the region there are several locked and abandoned homes. Tens of thousands of people have been forced to abandon their villages and head to slums in bigger cities to earn a living.

Landlocked Marathwada has historically suffered from water shortages, but decades of poor agricultural and water management policies have pushed the region to the brink.

Scientists and activists have long warned that relentless groundwater extraction has led to a steep drop in water tables across India — the world’s fastest rate of groundwater decline.

In the village of Masurdi alone, there are about 70 wells between 18 to 25 metres (60 to 80 feet) deep but they are all dry, says the headman, Nana Berde.

"Bore wells as deep as 500 metres (1,640 feet) have all gone dry. The underground water level has dropped so much that there is no water at all," he adds.

A recent agricultural shift has made things worse. Farmers who once grew millet, sorghum and other cereals have turned to sugarcane, which fetches more money but is a water−guzzler.

People like sugarcane worker Baburao Majmule now find themselves trapped between the middlemen who hired them and the farm owners who paid for the labour.

"The contractor had taken more money from the owner, and we were given a small amount of it to work in sugarcane factory. The contractor disappeared and the owner did not allow us to leave until he recovered all of his money," he said.

India’s meteorological department has said this year’s monsoon rains could be above average, as El Nino — a warming of the eastern Pacific Ocean that leads to dry spells in South Asia — recedes.

In the eight districts of Marathwada, that is still a distant dream. Though the rains usually hit the southern tip of India by June 1, it typically takes until late June for this area to begin to experience monsoon showers.

But in Taka village, residents long for that moisture and intend to make the most of it. They are digging a well — not with any hope of reaching the water table, but to create storage space for when the rains finally fall.