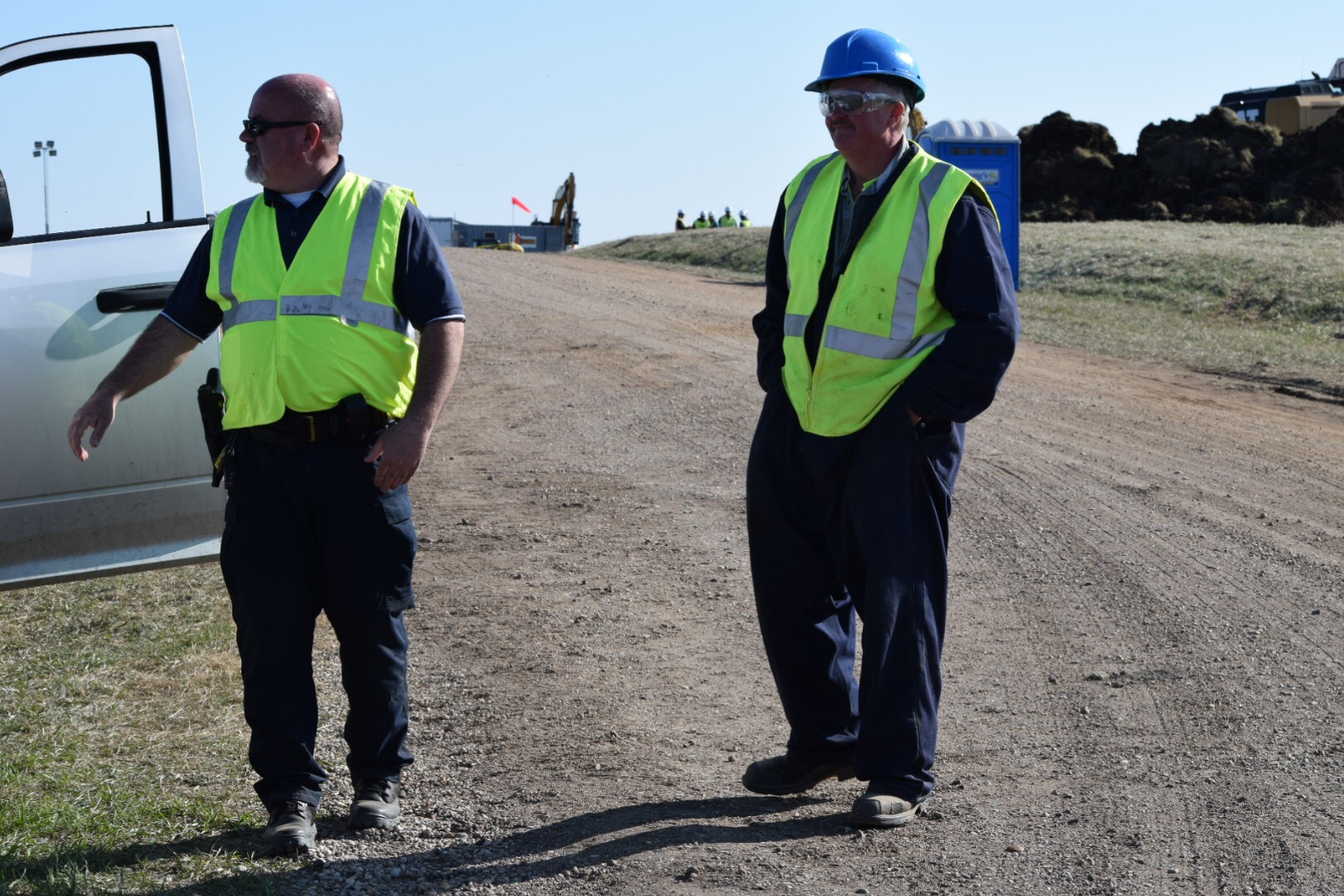 Guards protect the site of an April 2016 oil spill from the Keystone pipeline in South Dakota. File photo courtesy of Cindy Myers.
Previous story
Next story

A federal watchdog has ordered TransCanada Corp. to clean up a mess left over at drilling sites used for preliminary work on the stalled construction of the controversial Keystone XL pipeline project.

The work disrupted the habitat of some endangered amphibians and rare plant species disrupted during 2012 drilling work beneath the Red Deer and South Saskatchewan Rivers - two major Canadian waterways in western Canada, said the watchdog, Canada's National Energy Board (NEB), in a new order issued against the company on Tuesday.

The order is the regulator's second attempt in recent months to convince the energy company to follow the rules. TransCanada was required to reclaim the disrupted areas, including managing weeds and controlling erosion, as the project proceeded, but the company defied the rules because the project was stalled in its approval process, the NEB explained in the new order.

"The Board is of the view that precautionary measures are necessary for protection of the environment," the NEB said in its latest order.

"In light of Keystone’s response and given the current status of the project, the Board has to issue an order requiring Keystone to conduct additional environmental evaluations and consultation to ensure that protection of the environment is being met at the Red Deer River and South Saskatchewan HDD River crossings during the extended construction activity for the Project."

The NEB has powers of a federal court and all companies and individuals must respect its orders or appeal to a higher court if they disagree.

The latest NEB order said that it discovered the affected areas during an inspection last September. But when it issued an initial notice in October that the company was violating the rules and required to clean up, TransCanada responded by saying it had "no plans to conduct reclamation activities" for either sites "until mainline construction has been completed" on Keystone XL.

TransCanada is unable to proceed with Keystone XL, a major pipeline expansion project that was supposed to link Alberta's oilsands producers to refineries and export oil terminals in the Texas Gulf coast, after it was denied a presidential permit by U.S. President Barack Obama last November.

The new order contradicts statements made by the NEB to National Observer in February when a spokesman confirmed that TransCanada would not have to complete meeting environmental and other conditions of building the pipeline immediately since it was not proceeding with the project right away. The NEB made these comments after releasing data in February showing that federally-regulated pipeline companies in Canada had not completed about 41 per cent of all the mandatory conditions imposed through the regulator's orders.

Keith Stewart, the head of Greenpeace Canada's energy campaign, was astonished to hear about the new safety order.

"It takes a unique blend of hubris and incompetence to break environmental laws on a pipeline that you're not allowed to build, but TransCanada has managed to pull that off," Stewart told National Observer. "It is clear that Canadian authorities need to keep a very close watch on what this company tries get away with along the proposed Energy East pipeline route."

The safety order also comes one week after TransCanada submitted a 38,885 page application for the Energy East project - a proposed 4,600 kilometre pipeline running from Alberta to New Brunswick. The company also acknowledged last week that it still had to do more research to figure out how to run the pipeline safely under parts of the Ottawa and Saint-Lawrence Rivers in Quebec.

The NEB defended its contradictory public statements about TransCanada's obligations, telling National Observer in a new statement sent on Tuesday evening that its earlier comment from February was correct at that time. The regulator has been criticized by many stakeholders, including federal Liberals when they were in opposition, for being ineffective and too cozy with industry.

Keystone XL was approved by the NEB on April 27, 2010, but suffered a years-long debate during its U.S. regulatory review that saw environmental activists criticize everything from its route, to new greenhouse gas emissions resulting from oil being shipped on the pipeline, as well as the threat of spills.

TransCanada told National Observer in a statement that while it acknowledges it would work on "some" of the issues raised by the NEB today, it didn't have “any plans to conduct reclamation activities" at either site because it was still hoping to build Keystone XL “at a future date.”

“This segment of pipe is safe and not a threat to the surrounding community or landowners who have been informed of our mitigation measures going forward. The Red Deer River and South Saskatchewan River are not at risk,” the company said.

This story was updated at 10:15 pm Eastern Time on Tuesday following a new statement sent by the National Energy Board.