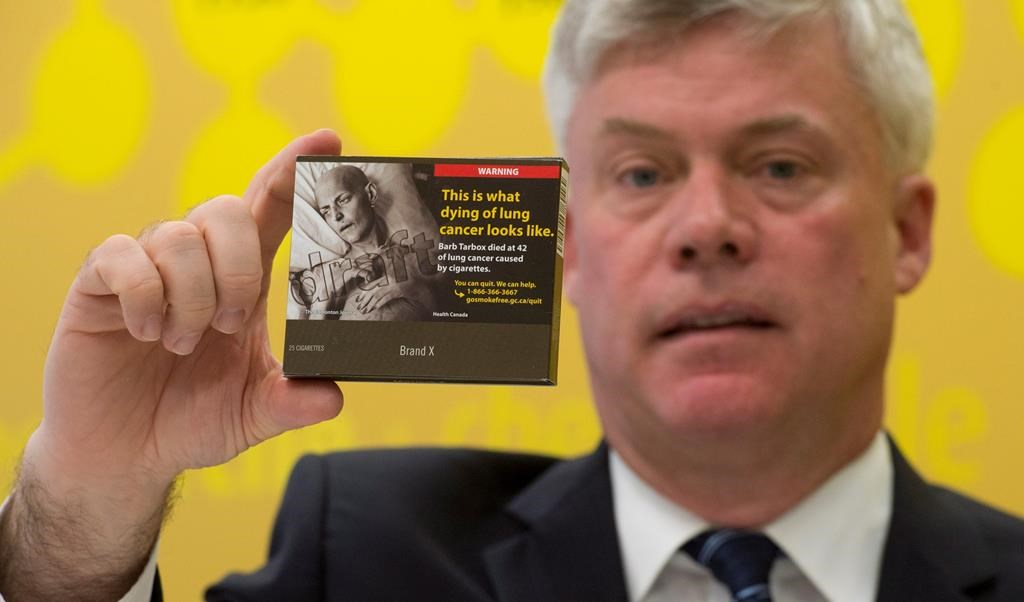 Anti−tobacco advocate Rob Cunningham holds up what a cigarette package could look like if plain packaging rules were instituted on May 30, 2016. Photo by The Canadian Press.
Previous story
Next story

A legal showdown could be looming as the federal government moves ahead with plans for plain packaging of tobacco products.

The proposal, which involves standardizing box sizes and prohibiting colours, logos and graphics on tobacco packages, is already lighting up industry players here, much like it has in other countries.

The government is exposing itself to a legal challenge, according to Imperial Tobacco spokesperson Eric Gagnon.

Big tobacco, it seems, is digging in for another smoke war.

"We believe, like any other industry, we have the right to have our brands on the products that adult consumers purchase so that’s why we are going to defend against such a measure," Gagnon said.

"We’ll have to wait and see what the government proposes, but we will defend against excessive and ineffective regulation. We have in the past and like any other industry, we are still a legal product."

The potential legal dust−up comes as no surprise to longtime anti−tobacco advocate Rob Cunningham, a lawyer and senior policy analyst at the Canadian Cancer Society.

Tobacco companies will fail if they take the legal route against the government, he said, pointing to unsuccessful challenges in countries including Australia, where the highest court ruled against the industry.

This does not discourage Gagnon, however, who stressed "different laws, different countries."

"We are not going to take for granted that what happened in other countries is going to be the same verdict in Canada," Gagnon said.

"We do believe it is a fundamental right as a legal company to have those brands and sell our products. That is the core of the discussion."

The Charter of Rights and Freedoms could be used by the industry to fight back over plain packaging — namely Section 2 which deals with fundamental freedoms.

A 2007 decision from the Supreme Court of Canada could be very useful for the federal government’s fight in this regard, Cunningham said

In its ruling, the court found federal provisions requiring health warnings to occupy at least 50 per cent of packages amounted to violations of the guarantee to free expression of tobacco manufacturers, but were justified under the reasonable limits clause of the charter.

"Parliament’s goal, notably to inform and remind potential purchasers of the product of the health hazards it entails, is pressing and substantial," the court said.

"The benefits flowing from larger (health) warnings are clear, while the detriments to the manufacturers’ expressive interest in creative packaging are small."

The government has a long history of winning against the tobacco industry in court and plain packaging is another instalment in this battle, Cunningham said.

"The tobacco industry knows that plain packaging is a major threat to its sales and it is going to be opposed," he said. "We simply have to respond."

A Commons health committee recommended plain packaging for products 22 years ago but tobacco companies still question the evidence of its effectiveness.

"This is the industry’s history to deny, deny, deny," Cunningham said, adding the measure has been recommended by the World Health Organization.

He said in addition to Australia, plain packaging has been embraced in France, the United Kingdom and Ireland, while formal consideration is also underway in Norway, Hungary, Slovenia, Sweden, Finland, New Zealand, Singapore, Belgium and South Africa.

The federal government also announced in March it would seek a cost−benefit analysis of the proposal in the Canadian landscape.

Health Canada would not address the potential legal challenge in a statement to The Canadian Press.

It noted plain packaging is not intended to infringe on the rights of companies to register and protect their trademarks.

The objective of the measure is to protect young people and others from inducements to tobacco, the department added.