Wynne apologizes for 'brutalities' of residential school system in Ontario 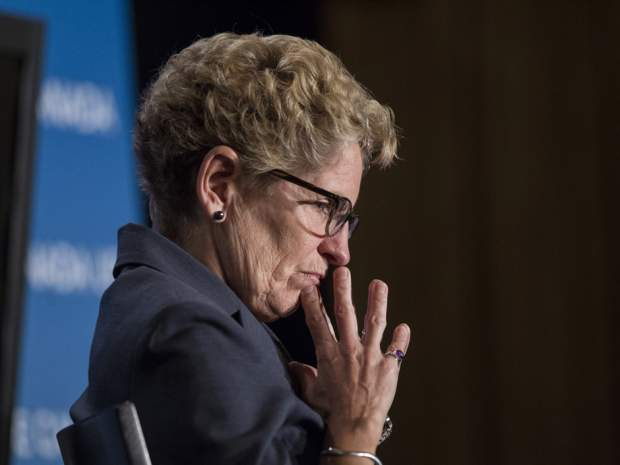 Premier Kathleen Wynne offered a formal apology Monday on behalf of the Ontario government to First Nations, Métis and Inuit communities for the "brutalities" suffered at residential schools.

"I apologize for the polices and practices supported by past Ontario governments and for the harm they caused," she told the legislature as Indigenous leaders and residential school survivors looked on.

The apology was part of the province’s reaction to the 2015 Truth and Reconciliation Commission, which found that children were physically and sexually abused and died in numbers that would not have been tolerated in any school system.

Wynne said Ontario wants to acknowledge "one of the most shameful chapters in Canadian history" and added that the province will teach a new generation of students the truth about our shared history.

"The residential school system set out to ’take the Indian out of the child’ by removing Indigenous children from their homes and systematically stripping them of their languages, cultures laws and rights," she said.

"Children were physically, emotionally and sexually abused. Many died."

Regional Chief Isadore Day, who also spoke during the special session in the legislature, talked about the "unspeakable abuse," the residential school survivors, their children and grandchildren have suffered.

"The vast majority of us as First Nations people across this land can speak of the direct impacts of this dark legacy," he said.

"Yes, many of us have lived in the direct darkness and shadows of the evil that was so evident in so many of those schools."

Andrew Wesley, a survivor of the residential school system, told the politicians that it took a long time before he could speak about his pain.

"The old ones tell us that when we come into this world we’re given one canoe and one paddle and as we travel the rivers of life, for many of us, the survivors, we got stuck in the rapids and we stayed there for many, many, many, many, many years before we start talking about the abuse," he said.

Wesley got a standing ovation after his emotional plea to work together to heal the wounds of the past.

"We’re telling you the truth because we’re tired of being hurt," he said. "We want to travel with the rest of you in a good way."

Day said the apology from Wynne was a good start to "let the healing begin," but warned too many Indigenous people are still living — and dying — in poverty.

"The deepness of poverty that continues to kill our people, this is not right. This has never been right in a land as rich as Ontario," he said. "Our ancestors did not envision these present horrors when they agreed to share the wealth of this land."

Ontario will spend $250 million over three years to help understand the legacy of residential schools and to create what Wynne called a culturally relevant and responsible justice system.

The Truth and Reconciliation commission issued 94 recommendations such as reducing the number of aboriginal children in foster care and granting police greater independence to investigate crimes where government may be an interested party.

As Wynne was offering the formal apology in the legislature, supporters of the Grassy Narrows First Nation were in the Queen’s Park media studio asking for help dealing with mercury poisoning that has devastated their community for over 40 years.

Justice Murray Sinclair plans to foster reconciliation from the Senate