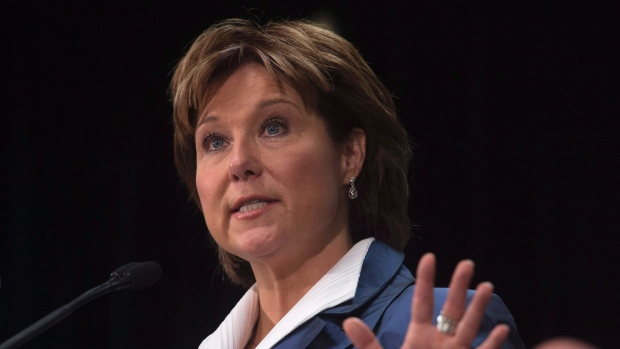 B.C. Premier Christy Clark has long been under attack for chronically shortchanging schools across the province. Photo by Canadian Press.
Previous story
Next story

The B.C. government softened some major budget cuts to education that have sparked a public outcry by putting back $25 million into the budgets of school districts across the province on Tuesday.

Nearly 30 school boards faced more than $80 million in budget cuts for the upcoming fiscal year, but Education Minister Mike Bernier announced a partial reversal, funded through "administrative savings." The $25 million is divvied up by school board and can be spent any way the boards see fit, he explained, whether that's hiring new teachers, investing in programs, or maintaining schools with falling enrollment.

“Our government is committed to ensuring that maximum education dollars go into services for students,” he said during the announcement. “Districts worked hard to reduce their administrative costs and we are pleased to be able to direct that $25 million back to programs and initiatives that will directly benefit the kids of B.C."

The cash comes only weeks after a National Observer story revealed that Premier Christy Clark's government made record investments in private schools and boasted a provincial surplus of nearly $400 million, while public schools across B.C. were faced closures due to insurmountable budget shortfalls.

The Vancouver School Board in particular recently voted to reject a budget suffering from more than $24 million in cuts that would slash 200 jobs affecting small group literacy interventions, sports and arts events, classroom sizes, teacher librarians, gifted teachers, resources teachers, and student support workers for the most vulnerable.

The ailing school board will receive a $2.2 million chunk of the new funding.

A "small step" in the right direction

While parents and teachers across the province are grateful for the investment, criticism has already come pouring in over the dollar amount, which only covers a fraction of provincial education deficits. Vancouver public schools will still face a crippling $22 million shortfall, but VSB trustee Patti Bacchus said the funding is a "small step" in the right direction.

"It tells me that the government is certainly hearing the parents and school boards who have been speaking out about the inadequacy of public education funding, but it’s going to take many more steps like this to bring us where we need to be," she told National Observer after the announcement. "This is a small part of it — probably almost, but does not [quite] keep up with inflation, much less addressing over a dozen years of shortfalls across B.C.”

The education minister made it clear on Tuesday that the $25 million would be a one-time investment, and Bacchus said school boards need a more consistent, long-term commitment. She added that the cash is likely the result of "pre-election panic" as much as it is a genuine reversal on a history of education cuts.

"We were told as much as a few weeks ago that there was no more funding coming for this next budget year," she explained. "Hearing a greater and greater chorus of voices across B.C., they’re feeling that pressure and they’re starting to get worried."

Shane Richardson, a concerned father of three from Vancouver, was disappointed with what he considered to be a paltry investment from a wealthy provincial government. His two eldest children are enrolled in VSB's home learners program at Beacon Field Elementary School — a program that has already suffered the layoffs of one full-time teacher and one part-time administrative assistant.

“The $2.2 million is woefully insufficient in my mind," he told National Observer. "That’s not even 10 per cent of what they initially stripped from the school board. Quite frankly, it’s insulting.

A B.C. government representative was not available to comment on this story before the end of the day on Tuesday.