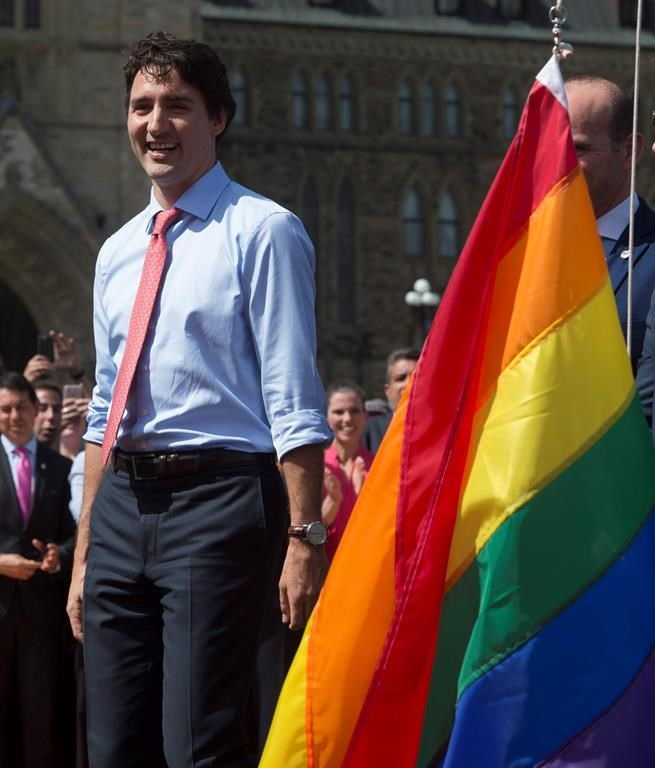 The Pride flag flew on Parliament Hill on Wednesday in a historic all−party show of support to mark the start of the month celebrating Canada’s lesbian, gay, bisexual, transgender and queer community.

Prime Minister Justin Trudeau had the honour of raising the distinctive rainbow banner on the Hill for the first time at a celebration attended by MPs from all federal parties, as well as dozens of onlookers.

"This is a great day for Canada and it is part of a long series of milestones this country has hit over the years," Trudeau said.

"It hasn’t been easy, it hasn’t been automatic. A lot of people fought for a long time for this day and for the many days that led up to this day to happen."

The fact that MPs from across the political spectrum attended sends a significant message, he added.

"Canada is united in its defence of rights and in standing up for LGBTQ rights; this is what we are truly celebrating today," he said to cheers and applause under a hot late−spring sun.

Trudeau said there is still more work to do, pointing to a bill introduced by his government last month to strengthen transgender rights following several attempts by private members to do so under past governments.

Trudeau will make more history this month when he becomes the first sitting prime minister to attend Pride parades.

Wednesday’s event was the first time the Pride flag has flown on Parliament Hill.

It was raised on the west lawn after six weeks of negotiations led by Edmonton MP Randy Boissonnault, who said the idea was suggested in conjunction with a two−day conference on LGBT rights currently taking place in Ottawa.

He said he was given just 48 hours notice that raising the flag would be permitted and paid tribute to the fact he had support from all parties in the House to make it happen.

He said the fact the flag was raised sends a crucial signal.

"It says that this is a government, this is a Parliament, that believes in inclusion and diversity," he said.

Over the weekend, the federal Conservatives took their own step forward on LGBT issues by dropping language from their policy handbook opposing same−sex marriage.

Trudeau mocked their conversation, noting it was coming more than a decade after the Liberal government had made same−sex marriage legal.

Only three flags are allowed to fly from the Peace Tower itself — the Maple Leaf and the two banners belonging to the governor general and the Queen.

There is a courtesy pole that’s used to fly the flags for visiting dignitaries, but a special one was set up for the Pride event.