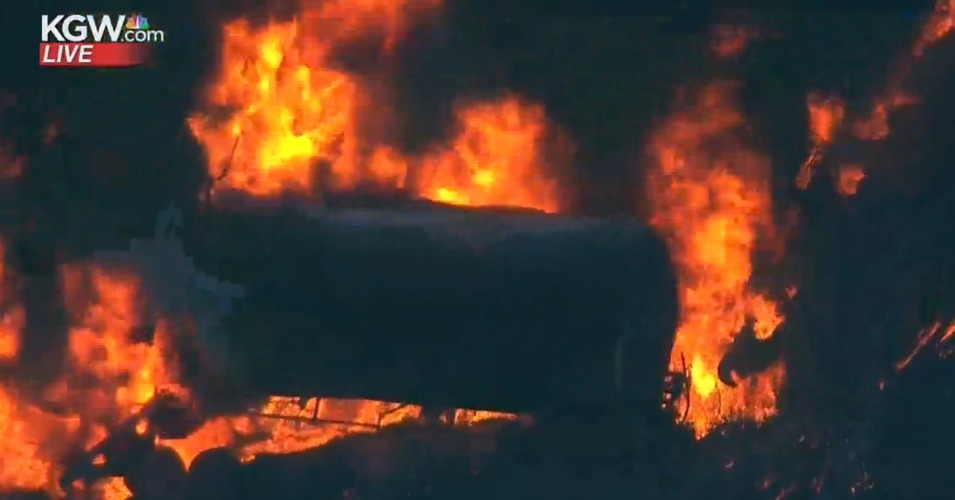 A fire is burning and large plume of smoke is rising after a train carrying oil derailed not far from the Columbia River in the town of Mosier, Oregon on Friday.

Termed colloquially by their opponents as 'bomb trains,' the increased threat of oil-by-rail disasters has been of growing concern across North America in recent years. Friday's disaster is just the latest in a long string of such accidents that have rocked communities and devastated fragile ecosystems in both the U.S. and Canada.

A multi-car oil train derailment Friday in the Columbia River Gorge near Mosier sent up a massive plume of black smoke and stoked long-standing fears about the risks of hauling crude oil through one of the Pacific Northwest's most renowned landmarks.

One to two cars were on fire -- part of a train hauling eight cars, authorities said. It's not clear how many cars derailed. Photos showed at least seven cars off the tracks.

There were no immediate reports of injuries.

Ken Armstrong, spokesman for the Oregon Department of Forestry, says the incident involves eight cars filled with oil and one is burning. The train was operated by Union Pacific. A spokesman for the railroad didn't immediately return calls.

Mosier schools reported that they are evacuating students to the Wahtonka campus in The Dalles. Parents are able to pick up their children, if they wish but they may face traffic issues near the I-84 closures.

Friday's derailment fulfills the worst fears of local residents who have long opposed such trains passing through their communities. In 2014, in fact, the Oregon Department of Transportation (ODOT) angered many by deciding that it would not force oil and train companies to inform local communities, including public safety offices and fire departments, of the kind of cargo that trains would be hauling through the area. As the Oregonian reported in 2014:

Arthur Babitz, Hood River’s mayor, said he was troubled to learn about the new traffic through his city. If a train derails and catches fire there, he said firefighters would be on scene within five minutes. But they wouldn’t learn from railroads what the train carried for 45 minutes.

“I imagine CNN shoving a microphone in my face and asking about some horrible tragedy that’s affected my city,” he said. “Given how dangerous these trains can be – the fact that we didn’t know anything about it – makes me wonder how much regulatory oversight there is to this. That can’t make me feel comfortable.”