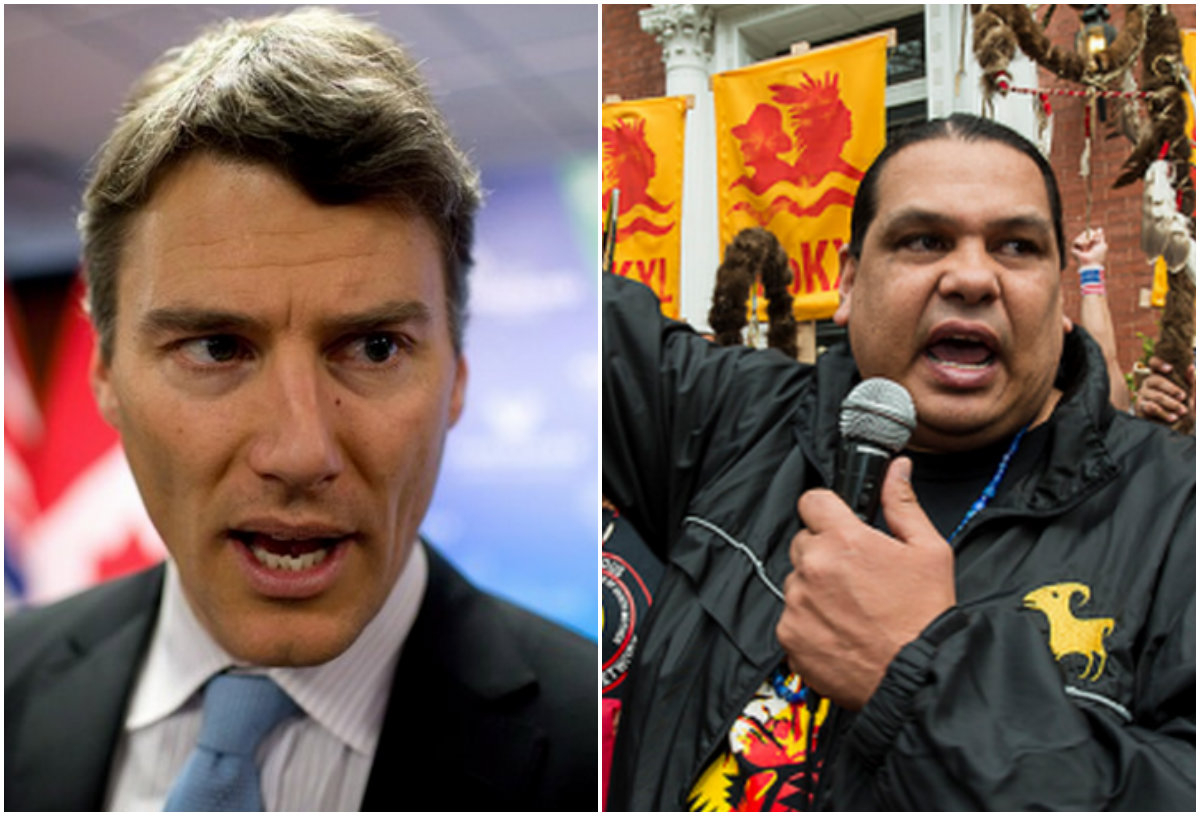 Vancouver Mayor Gregor Robertson and Tsleil-Waututh spokesperson Rueben George have been some of the most vocal opponents of the Kinder Morgan Trans Mountain expansion pipeline proposal. Photos by Canadian Press and Garth Lenz/iLCP.
Previous story
Next story

Chief Maureen Thomas of the Tsleil-Waututh Nation, Chief Ian Campbell of the Squamish Nation, and hereditary Chief Howard Grant on behalf of the Musqueam Nation are planning to make the trip to pressure key decision-makers within the Trudeau government about the project. The government has said it would make a final decision before the end of the year.

“The risk of a devastating oil spill with the 600 per cent increase in oil tanker traffic from an expanded Kinder Morgan pipeline is simply not worth the risk to Vancouver,” said Robertson in a statement released on Friday. “There is overwhelming opposition to this project from residents, local First Nations and Metro Vancouver communities. As Mayor, I will advocate forcefully to the prime minister and federal government to say a definitive ‘NO’ to this project.”

The Trans Mountain expansion — recommended for approval by the National Energy Board last month —would add 987 kilometres of brand new pipeline to triple the capacity of a system that currently transports 300,000 barrels of oil per day from Alberta’s tarsands to ports and refineries in Vancouver and Washington. The NEB attached 157 environmental, financial and technical conditions to its approval, including nine for air quality and greenhouse gas emissions.

The visit represents the first official joint visit to Ottawa between the city of Vancouver and the Tsleil-Waututh, Squamish & Musqueam Nations and will include Cabinet Ministers responsible for making the final decision on the Kinder Morgan pipeline, expected this December. It promises to be one of many efforts to stop the federal government from approving the project in December, as other municipalities vow to take action.

In the meantime, the federal government has appointed a three member panel to conduct additional consultation, particularly with First Nations, along the Trans Mountain routes in B.C. and Alberta. The panel will report back to cabinet with feedback in November, and its recommendations will inform the final decision.

“The National Energy Board process was deeply flawed and many interveners and voices were shut out of the process," added Robertson.

"I trust the ministerial panel will do its due diligence in bringing communities back to the table who should have had their voices heard by the National Energy Board in the first place, and I’m confident that after the panel’s consultation, they will hear loud and clear that there is no business, environmental or social case for this pipeline to be approved.”

The Trans Mountain operation, once completed, would involve 987 kilometres of brand new pipeline, 12 new pump stations, and 20 new tanks. Kinder Morgan has said it would also generate at least 4,500 construction jobs at peak employment, and $23.7 billion in additional taxes and royalties for provincial and federal governments.

"The Trans Mountain Expansion Project will help make sure Canada gets full value for its oil," the company said on its website. "Everyone will benefit. Workers will benefit during a $6.8-billion construction project. Oil producers will earn more revenue for their product. Government will collect more tax revenue from oil that will go towards services that benefit all Canadians."