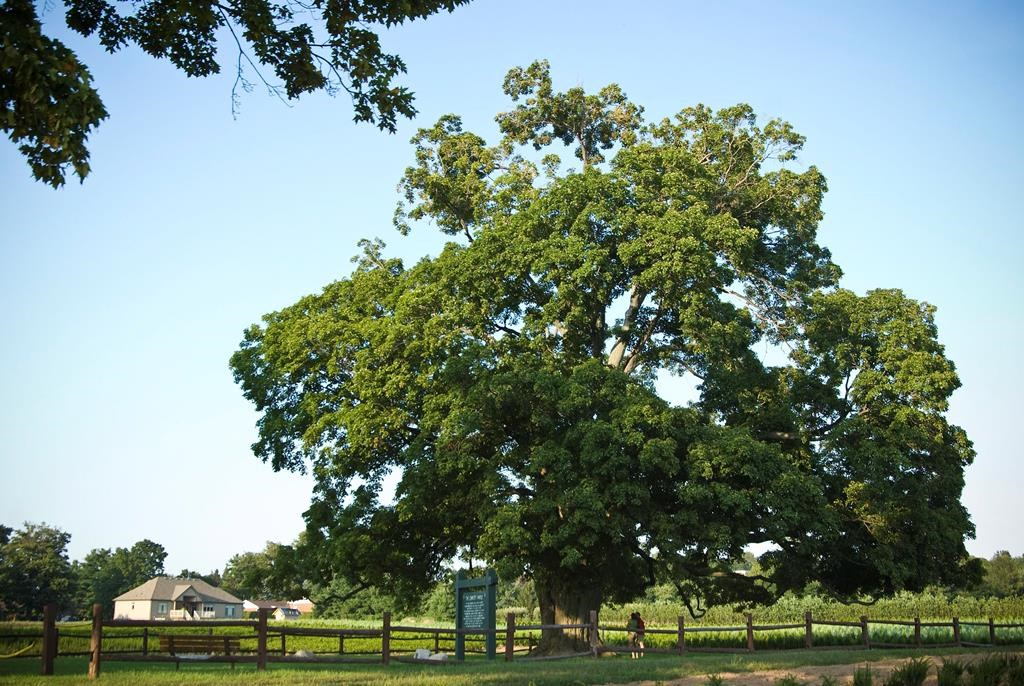 Niagara conservation officials have found a new use for this sugar maple, one of the oldest living ones of its kind in Canada. Photo by The Canadian Press.
Previous story
Next story

Niagara Region conservation officials have found a new use for an old tree in Pelham, Ont.

The town's celebrated Comfort Maple — named after the family that once owned the land on which it stands — is thought to be one of the oldest living sugar maples in Canada. It has been designated for its heritage value under the Ontario Heritage Act and is depicted on Pelham's coat of arms.

The region's relatively mild climate and ideal soil conditions — sandy loam — have enabled the tree to live an estimated 500 years, give or take half a century, far beyond a sugar maple's normal life expectancy, said Michel Germain, a superintendent with the Niagara Peninsula Conservation Authority.

"It still has leaves, it's still fairly healthy, but it's in the latter stages of its life," he said.

Wood that Germain has saved after being pruned from the tree has now been repurposed by a local artisan, Marv Ens, to make handcrafted pens. The Niagara Peninsula Conservation Foundation, which raises funds for the authority, is offering a small number of the pens for sale at $55 each. Once the supply is gone, the plan is to ask Ens to make another batch.

A prototype that Ens made was given to former prime minister John Turner at a local function last year.

Over 24 metres high and with a massive six-metre girth around the trunk, the tree is currently beset by rot, Germain said. Cavities have been filled with concrete, and cables within the crown are being used to help stabilize branches in high winds.

The conservation authority owns the small plot where the maple grows, fertilizing the ground and dumping water in hot summers.

Germain says the Comfort Maple is a tourist attraction and calls it one of Canada's "hidden gems."

"We want to keep this baby as healthy as we can, as long as we can. There will come a day when it will fall apart, but we're trying to delay that."

The Comfort Maple is located off a laneway at 1732 Metler Rd. in Pelham, 25 kilometres west of Niagara Falls, Ont.

To inquire about buying a pen, email the foundation at [email protected]